The first daughter met with Justin Trudeau and the president for a round table discussion on women in the workplace. The only woman likely to benefit is Ivanka herself. 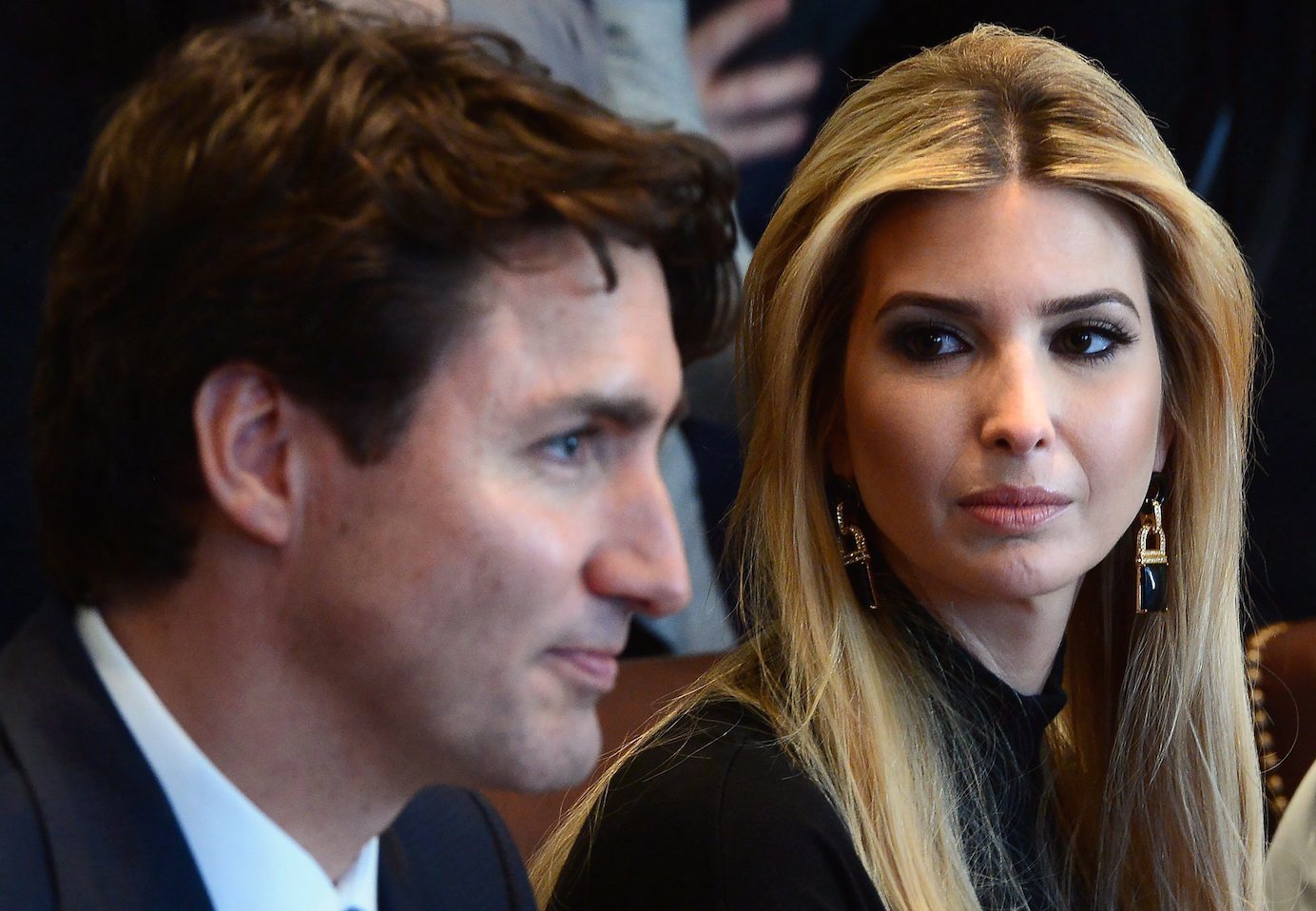 As many predicted, the first in-person meeting between Prime Minister Justin Trudeau and U.S. President Donald Trump was heavy with expectation and light on substance. They shook hands for the cameras (Trudeau deftly avoiding Trump’s trademark grip-and-tug), sidestepped tricky questions at their press conference and called the day a success.

One of the most hyped set-pieces was a roundtable to launch the United States Canada Council for the Advancement of Women Business Leaders-Female Entrepreneurs. The group of CEOs and entrepreneurs intends to promote women-owned businesses and “focus on ensuring women enter and stay in the workforce to address barriers facing female entrepreneurs.” Its members include: GE Canada CEO Elyse Allan, T&T Supermarket’s Tina Lee and Canadian foreign affairs minister Chrystia Freeland. Leading the charge for the brain trust was Trump’s daughter Ivanka, one of his closest confidantes in business and in politics.

The idea for the council reportedly came from Trudeau’s chief of staff Katie Telford, perhaps as a diplomatic sop and a tactful distraction from awkward subjects (the Muslim ban, the pussy grabbing, the U.S. refugees seeking sanctuary in Canada). It was savvy on Telford’s part to reach out to Ivanka, whose pet cause is working mothers. And next to Trump, who has been accused of sexual misconduct by more than a dozen women, our avowedly feminist PM looked all the more suave and progressive by comparison — a sleek, bilingual, woke James Bond to Trump’s belligerent, malevolent Auric Goldfinger.

No disrespect to the female business leaders involved, but it’s unlikely anything will be achieved by their efforts other than a general you-go-girl-boosterism for those who fly First Class. The barriers to women’s professional advancement are hardly a secret. White-collar women are held back by deeply held gender biases; by inadequate childcare and family support; and by terrible maternity leave policies. Blue-collar women are affected by all these things to an even greater degree, as well as by job insecurity and stagnant minimum wages.

But even if this council wants to enact changes, the biggest barrier they have is the man who hosted them: Donald Trump. The U.S. president has hurled personal, mean-spirited attacks on professional women like Hillary Clinton, Carly Fiorina and Megyn Kelly. He divorced his first wife because she was too busy working. (“Putting a wife to work is a very dangerous thing. If you’re in business for yourself, I really think it’s a bad idea. I think that was the single greatest cause of what happened to my marriage with Ivana,” he said back in a 1994 interview.). And of his current marriage to Melania, he’s said, “I’ll supply funds and she’ll take care of the kids.” His cabinet and senior staff are overwhelmingly white and male. 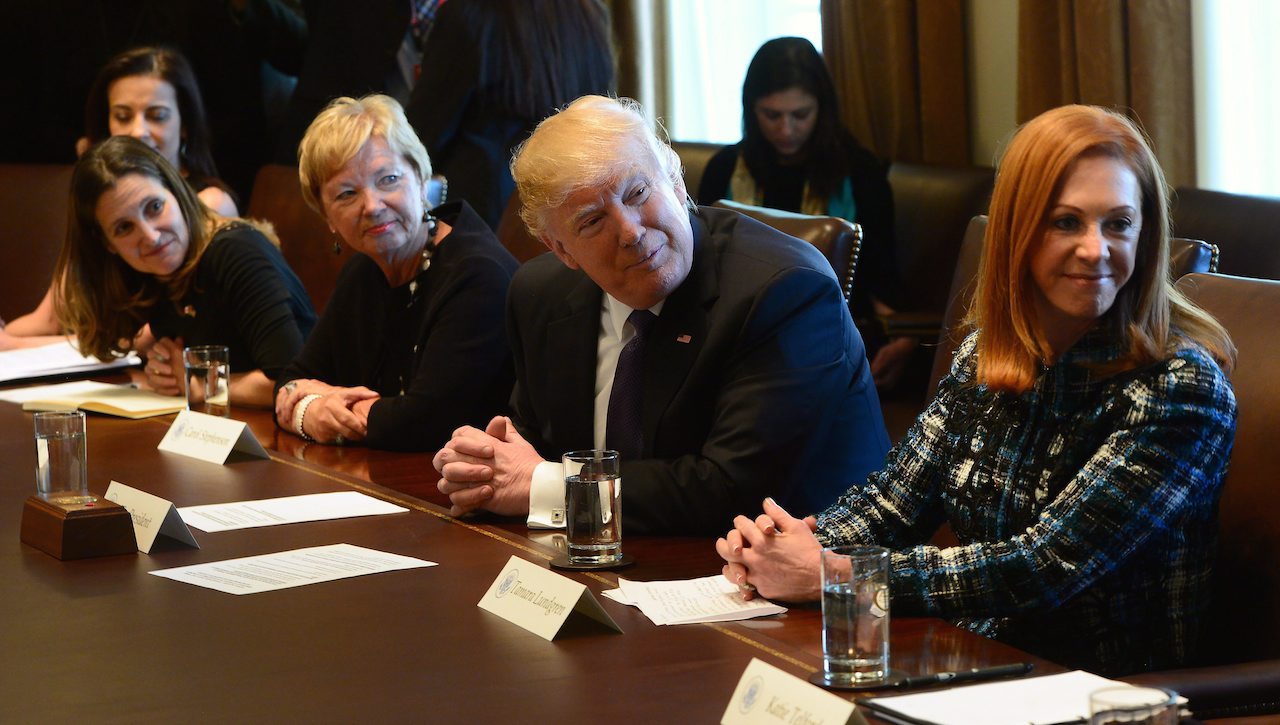 In fact, the only female CEO who stands to gain at all from this council is Ivanka Trump, and not just because she couldn’t stop swooning in her seat beside Trudeau. The council’s launch conveniently teases the publication of her upcoming book Women Who Work: Rewriting the Rules for Success. Taking a cue from Taylor Swift, Ivanka seems to be assembling a cross-border squad of lady powerhouses to bolster her own reputation.

Like everyone else named Trump, Ivanka has used her father’s presidential campaign and election as a brand-boosting exercise. After she appeared on 60 Minutes in November following her father’s election, her team sent out a press release shilling the bracelet that she wore from her own jewelry line during the interview. Her lifestyle site Women Who Work offers bland platitudes about multitasking while promoting Ivanka Trump clothing, accessories and housewares. There’s plenty of me-first personal empowerment chatter but zero consideration of issues like sexual harassment in the workplace or the wage gap. The nannies and caregivers who ease the burdens of wealthy women like Ivanka are invisible and no mention is made of the fact that the contractor who designs and distributes her clothing line doesn’t offer its employees a single day of paid maternity leave.

Related: Why everyone is obsessed with The Handmaid’s Tale right now

And all the while her father has denigrated women and threatened reproductive rights, she’s acted as his chief apologist, using her Career Girl meets Everymom appeal to soften his misogynist edges. She’s often taken on the responsibilities usually given to a First Lady or candidate’s wife, including introducing him at the Republican convention, where she called her father a “feminist.” It was a statement as rich and ridiculous as her calling herself an entrepreneur, a title that suggests someone who has had to work hard and take bold, risky chances. Born into extraordinary privilege, hired into the family business and married to a man who inherited a fortune, Ivanka Trump has never had to take a real financial risk in her life. Which is why her exploitation of feminism is so grotesque — as writer Jill Filipovic says, “she’s a kind of post-feminist huckster, selling us traditional femininity and support of male power wrapped up in a feminist bow.”

Increasingly, though, women aren’t buying Ivanka Trump’s fake feminism — or her shoes and purses, for that matter. Over the past few weeks, several retailers, including high-end Nordstrom and Neiman Marcus, as well as budget-friendly Sears and Kmart have dropped Ivanka Trump’s clothing, jewelry and housewares lines. The stores have merely said the products haven’t been performing well, but credit is certainly due in large part to #GrabYourWallet, a mass boycott of Trump family businesses launched by two women protesting Donald Trump’s sexism.

And some female entrepreneurs, with whom she’s eager to align herself, aren’t having any of her, either. Anne M. Mahlum is the CEO of the hugely successful Washington, D.C. chain of Solidcore gyms. When she found out that Ivanka Trump had worked out at one of her locations, Mahlum called her out on Facebook and demanded a meeting. She wants her gym to be inclusive and safe and wondered if Ivanka’s presence might upset people, given her father’s anti-women and anti-Muslim policies. “Her father is threatening the rights of many of my beloved clients and coaches,” Mahlum wrote, “and as a business owner, I take my responsibility to protect and fight for my people very seriously.”

Ivanka might be hoping to skirt further criticism of her and her father’s shady practices by championing women in business. She’s not wrong in thinking that feminism is powerful. She’s just underestimated what can happen when that power is turned against her.

More:
Caring for my dying father was the only way I knew how to say goodbye
The 25 best spring shoes and bags, from sleek to sporty, starting at $40
What your nails say about your health