Quebec’s Muslims have long been reminded that we're outsiders

After the deadly shooting at a Quebec City mosque, there was a rush to reassure Muslims that they are "Quebeckers like us" — and yet, for years, we have been reminded of our undesirable difference. 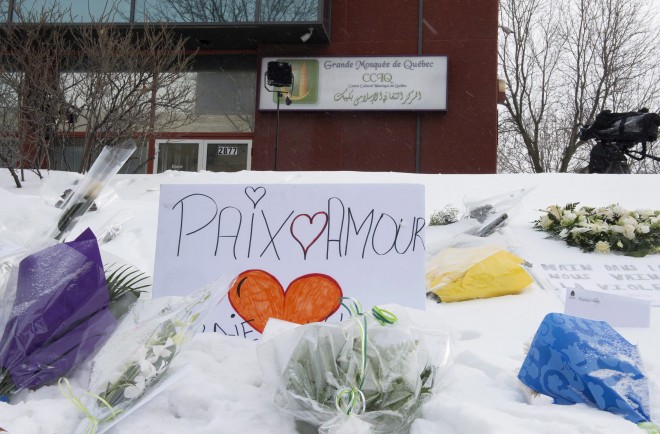 Signs sit outside the Quebec City mosque that was the site of a deadly shooting on Sunday. Photo, Jacques Boissinot/The Canadian Press.

On Jan. 29, six Muslim men were shot dead in a mosque in Quebec City while they prayed, while 19 were injured. Alexandre Bissonnette, a 27-year-old from a suburb of Quebec City, has been charged with six counts of first and five counts of attempted murder. While Bissonnette has been described as an “extremist troll” and “ultra nationalist white supremacist”, and the attack has been recognized as terrorism by Prime Minister Justin Trudeau, Bissonnette has yet to be charged with any terrorism-related offences.

In the hours following the shooting, the calls for solidarity and unity came quickly. Politicians and media pundits expressed incredulity that such events could take place in a peaceful city like Quebec, while social media was full of shock that something like this could happen in friendly Canada. From Quebec’s premier to Quebec City’s mayor, there was a rush to reassure the local Muslim communities that they are indeed “Quebeckers like us” — and yet, for years, Quebec’s Muslims have been regularly reminded of our undesirable difference.

Bissonnette was an admirer of Donald Trump, who very soon after his election has imposed an entry ban on citizens from seven Muslim-majority countries, but these tensions existed in Quebec long before Trump came along — looking outside ourselves for a scapegoat only serves to avoid taking responsibility. This also applies to the rest of Canada, which in my view is often comforted by events in Quebec as evidence of its own good behaviour when it comes to so-called visible minorities. The fact is that while there is a Quebec-specific context that has facilitated the perpetuation of racism and xenophobia— affecting not only Muslim communities but also most viciously targeting black and indigenous communities — the rest of Canada remains a place of deeply entrenched systemic inequalities.

Especially since 9/11, though, Quebec has been contaminated by the global wave of Islamophobic intolerance and since then, Muslims have been warning our fellow citizens and policymakers about the inevitability of such a tragedy if growing Islamophobia went unchecked. Instead of taking these warnings seriously, successive governments have continued to propose legislation that clearly targets Muslims.

As a long time anti-racist feminist activist, I have been deeply involved in these debates. Two moments in particular marked this difficult period for Muslims in Quebec, especially for Muslim women who continue to be the object of disproportionate public scrutiny. In 2006, the “reasonable accommodations” debate erupted after Quebec media obsessively ran stories about private and public spaces temporarily making adjustments for members of religious minorities. Instances of accommodation like a sugar shack that left out ham from its pea soup for a group of Muslims patrons, or a Montreal city pool that reserved a few hours a week for women’s-only swim, were cast as attacks on the province’s deeply rooted secular identity. The Liberal government at the time spent millions of dollars on the Bouchard-Taylor Commission to explore the issue, which led to many public meetings where people took to mics to invite Muslims and other minorities to either be like everyone else or go back to where they came from.

Related: 5 ways you can take a stand against hate right now

The years following the Bouchard-Taylor Commission were fraught with tension, marked by an increasing lslamophobic and anti-immigrant sentiments. In the fall of 2013, the newly-elected Parti Québécois government tabled its so-called Charter of Values. Had it been turned into law, it would have prevented public sector workers from wearing any garb that could be identified as religious, with the exception of small crosses. While the minister responsible, Bernard Drainville, denied this project had any one target, it was clear that hijab-wearing Muslim women would be among the principle victims of such a ban. Eventually, the PQ government was defeated in 2014, but the trauma inflicted by the political and social tensions from that period remain palpable within many communities.

And then there are the everyday indignities people who are Muslim or assumed to be Muslim have faced in Quebec: halal butcher shops have been vandalized, women wearing hijab have been pushed on the metro, community spokespeople have faced death threats and a pig’s head was left on the doorstep of the very mosque in Quebec city where six Muslim men lost their lives.

In the days following the massacre, most Quebec politicians remain unwilling to admit that Islamophobia exists, let alone take any kind of responsibility for the impact their political rhetoric might have had on people such as Alexandre Bissonnette. This is despite news reports that the shooter had liked the Facebook pages of prominent nationalist and anti-multicultural intellectuals such as Mathieu Bock-Côté. He also followed Marine Le Pen, the leader of an extreme right-wing party from France who has compared Muslims praying in the street to the Nazi occupation of France.

Quebec Muslims have watched with tremendous trepidation as an increasing number of French advocates of hard-line secularism, like journalist Caroline Fourest whose feminist convictions including being offended by the hijab, have been invited to speak here in Quebec to large and enthusiastic crowds. All this under the guise of preserving Quebec’s so-called secular culture, which has become the most essential marker of Quebec’s identity in the face of increasing visibility of Muslims in the province.

On Jan. 29, Alexandre Bissonnette stole more than the lives of six Muslim fathers. He also shattered the illusion we have clung to for far too long that somehow we as Canadians are immune from such bigotry and violence.

Leila Bdeir is a teacher of Humanities and Women and Gender Studies at Vanier College, in Montreal. She is the co-founder of the Collective des féministes musulmanes du Québec; her blog is called The Other Feminist.

More:
Sometimes I have an irregular heartbeat. Should I be worried?
Everything you need to know about the Keystone XL pipeline
Depressed about Trump’s victory? Don’t feel hopeless. Do something.