How did our #feminist PM do on International Women's Day? Let's take stock

Some of Justin Trudeau's efforts get a big round of applause (like that $650-million pledge to support international reproductive rights). Others fall a little flat. 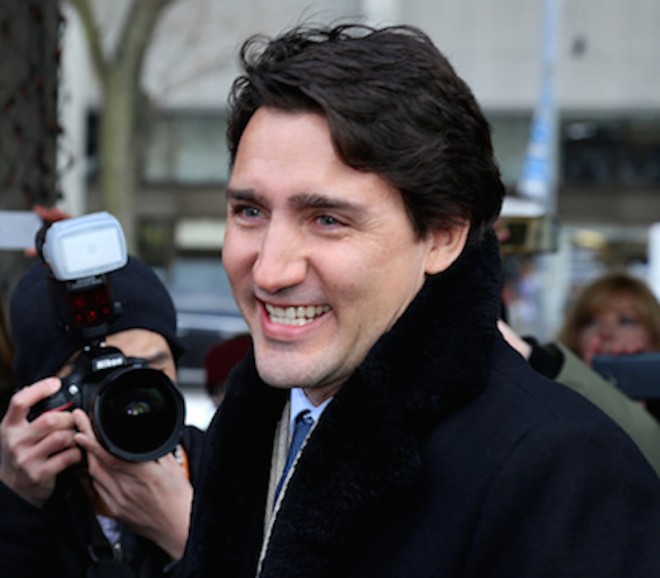 International Women’s Day was the perfect moment for Canada’s proudly feminist prime minister to renew his commitment to gender equality and remind Canadians of the work that still needs to be done to achieve it. Canada, after all, has become a feminist bright spot on the global stage, its reputation massively bolstered by its proximity (and contrast) to one Donald J. Trump. But as an Oxfam Canada report highlighted this week, the government has fallen short in turning some of its rhetoric into policy. So did Trudeau ace the day? Not quite. The PM splashed out with a very public, five-pronged celebration of #IWD2017 to mixed reviews. Here, we grade his performance.

March 7: To Facebook!
Sophie Grégoire Trudeau got the first crack at delivering a message of equality heading into IWD. But her well-intentioned “hold-your-male-ally’s-hand” directive (posted on Facebook and Instagram) landed awkwardly and the Internet mocked the couple mercilessly. Grade: C

On #IWD2017, we celebrate the remarkable achievements women have made, & reaffirm our commitment to gender equality: https://t.co/ElKIQYJ7uK pic.twitter.com/ONRYXQu8G6

March 8, 9:00 a.m: Money talks
Justin Trudeau started the day by releasing a video tweet that celebrated Canadian women, and acknowledged the areas where work is still to be done. A short time later, he and International Development Minister Marie-Claude Bibeau announced a pledge of $650 million to support international reproductive rights efforts. The sum will help fill the gaping hole left by Trump’s executive order that pulled U.S. money from aid agencies that help women access abortion. Grade: A+

12 p.m.: Women in the House
He continued his hot streak with an inspiring reception for Daughters of the Vote, an Equal Voice initiative designed to get a new generation of young women involved in politics. “This house looks so good with 338 women in it,” he told the group, acknowledging his cabinet’s gender parity and that diversity is still a work in progress. Grade: A

1 p.m.: This maybe could have waited
Soon after, reporters on Parliament Hill circulated a Liberal Party fundraising letter from Sophie addressed to donors, talking up the great work the Trudeau government is doing on gender equity. The letter asked for donations to raise $25,000 for the Judy LaMarsh fund, which supports Liberal women candidates running for office. “Liberals trying to fundraise on back of International Women’s Day” tweeted CBC’s Katie Simpson. It’s hard to argue with the bad optics here. Liberal spokesperson Braeden Caley told the CBC the email was about ensuring the “involvement, representation and election of more women in politics.”  Grade: C+

1:30 p.m.: Back to Facebook!
The Trudeau team hit publish on a Facebook interview with the social media platform’s Chief Operating Officer, Sheryl Sandberg. “In Conversation: International Women’s Day,” was positioned to bring people up to speed on Trudeau’s progress on feminist issues, because, you know, it’s 2017. It’s sincere and packed with great, irrefutable stuff about the importance of gender equity and how everyone should believe “women’s rights are everybody’s rights.” He even doubled down on Sophie’s message that men need to be better allies. But the document offered nothing we haven’t already heard from the PM — teach boys to be great allies, diversity leads to a stronger government, poverty is sexist — and lacked substance. We agree that girls deserve opportunities to “achieve their dreams,” that more women should be in leadership roles and that men absolutely need to become equal partners at home, but how, Justin? How?

Trudeau waxed platitudinous on the need to value women, but said nothing of Canada’s pay equity gap (women are paid 87 cents on the dollar, according to a new report from Statistics Canada). He identified that poverty disproportionately affects females, but didn’t talk about minimum wages or childcare. He noted, in a global context, that a woman’s earning potential increases with every year she stays in school, yet only four out of every 10 young people on Canadian reserves graduate high school. Sure, he was talking to the CEO of Facebook about global issues facing women, and we don’t expect him to get into the nitty-gritty of domestic issues, but some acknowledgment of the very real-life, daily issues facing Canadian women, and what we might do about them, would’ve gone a long way toward grounding the stratospherically high-level discussion. Grade: E for effort.

Final Grade: B.
It’s great our PM comes out for International Women’s Day, and Yahtzee for that $650 mill! Next year, let’s aim for straight As.