As this week’s debate showed, a woman’s anger and toughness can be powerful — and charming.

Hillary Clinton has talked (and e-mailed) plenty over her career as a lawyer, first lady, U.S. senator and secretary of state. But it was a simple “no” that spoke volumes at this week’s Democratic debate. “No,” she told moderator Anderson Cooper, she did not want to respond to her opponent Lincoln Chafee’s claim that she had been shifty during her tenure in the state department. That was it. Just a firm “no” and nothing more, which earned her laughs and cheers and applause during an overall winning night. (Watch the exchange in the video above.)

That “no” resonated because it seemed that Clinton wasn’t merely replying to Cooper’s question, but to all the nonsense and hate that has been levelled against her in her historic run to become America’s first female president. No, she seemed to be saying, I will no longer put up with people whose sole purpose is to discredit me. No, I’m not my husband’s puppet. No, the inner workings of my marriage are not your business. And, most especially: No, I’m not cold or heartless or unlikeable or fake and I’m done — done — trying to prove it.

Clinton’s performance at the debate was, in fact, terrifically tough. She was visibly angry over attacks on women’s reproductive rights and family leave policies — “it’s always the Republicans or their sympathizers who say, ‘You can’t have paid leave. You can’t provide health care.’ They don’t mind having big government to interfere with a woman’s right to choose and to try to take down Planned Parenthood.” And she seemed tickled to rhyme off a list of her favourite enemies, among them: the National Rifle Association, health insurance companies, the Iranians and the Republicans.

This fierce, blunt, take-no-prisoners Clinton was bracing, even thrilling, to watch — a reminder of why she was an inspiring figure in 2008 and why she is the frontrunner now.  But more than anything, her loose and confident showing at the debate may finally shut down the endless critiques and handwringing over whether she is nice enough and likeable enough to be president. 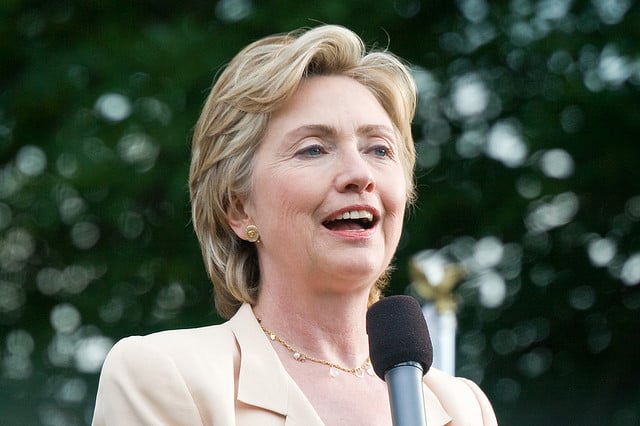 Clinton is an imperfect politician and there are valid and fair questions to ask about her fumbles balancing “political expediency versus principle,” as one commentator has put it. But that has not always been the focus of her critics. Instead, she has been called a “bitch” and her alleged lack of charm has been tediously analyzed and even put to her directly, like when Barack Obama begrudgingly admitted, “you’re likeable enough, Hillary” during a 2008 debate and then earlier this month, when Today’s Savannah Guthrie said to Clinton that Americans “just don’t connect with you, they don’t trust you, they might not like you.” Both times, Clinton said “that hurts my feelings,” as it would anyone’s, but feelings are the least important thing at stake when it comes to a woman in power being perceived as likeable.

The U.S.-based Barbara Lee Family Foundation, a nonpartisan research group which promotes female elected officials, looked at the 2010 gubernatorial races found that when women were running, the more likeable candidate won nine out of 10 times. Notably, when two men were running against each other, likeability didn’t factor into the outcome at all. The foundation’s director told the Boston Globe, “Clinton being painted rightly or wrongly as ‘unlikeable’ will damage her electability,” adding that female candidates who aren’t likeable also are viewed as less qualified, even if they have strong credentials and experience.

What’s most telling is that in Clinton’s case, her lack of likeability and niceness is almost always twinned with the charge that she is inauthentic. The assumption underlying this is that women are by nature “nice” and so when we are likeable we are also most real.

But I’d wager that most women — myself included — feel forced to fake niceness on many occasions, and that when we are behaving in a likeable manner, we’re not actually being authentic. In order to appear pleasing to others, we have to stifle our less-than-likeable qualities, such as our ambition, our pride and most certainly our anger. Yet those are some of the very qualities that make for great leaders and drive social change. As the formidable Nobel Prize winner and Liberian peace and women’s rights activist Leymah Gbowee says, “Anger started me, anger keeps me going. Hopefully when I am old, happiness will make me retire.” (Or as Tina Fey and Amy Poehler have put it: Bitches get stuff done.)

On stage at the debate, Clinton showed many sides of herself: her anger and her grit, her confidence and her sense of humour, her grasp of policy, her intelligence and her utter delight in trouncing opponents. It wasn’t “nice.” It was real and it was very, very likeable.