Elizabeth May was the best thing about #elxn42

The Green Party leader provided some of the most badass moments of this very long, very male election campaign. 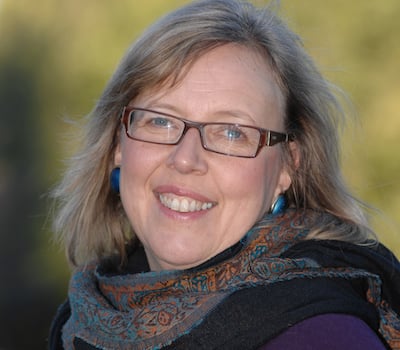 When an election campaign grinds along for 78 days, voter fatigue is all but guaranteed, unless you throw some dramatic firings and/or fun political soundbites into the mix. (You can read about those ridonkulous moments here.) But in the midst of all those off-colour sideshows, one of the most interesting personalities, aside from #BathrobeGuy, was Elizabeth May. In addition to charming the pants off of viewers with errant peace signs, the Green Party leader proved a force to be reckoned with on debate nights, regularly putting the federal boys’ club in its place when it came to climate change and child care. Yes, we’re a women’s magazine but gender aside, May had spunk and smarts all campaign. Below, a few of her finest moments.

There’s no better way to set your opponents on edge before a French language debate than to give a two-finger, Spice Girls–style salute to the electorate. We’re still obsessed.

All politicians know the value of a well-placed family photo op — or, you know, a well-balanced baby. But May’s connection with her only daughter, Cate May Burton, seems genuine. May Burton has been a fixture on the campaign trail for weeks at a time, often acting as calm counsel on debate night. “I decided that knowing her, she was doing the best she could not to retaliate in terms of interrupting and talking over people,” May Burton told The Globe and Mail in September. “So I took some liberty with the advice that people were trying to give her.” Mama May has been influential on her daughter’s politics, too: May Burton made a late-game run against NDP incumbent Ruth-Ellen Brosseau in the Quebec riding of Berthier-Maskinongé.

Not inviting Elizabeth May to a federal debate? Big mistake. Huge! She may not have been invited to participate in The Globe and Mail‘s spirited Sept. 17 debate, but May live-tweeted along anyway, publishing quick video rebuttals to Thomas Mulcair, Stephen Harper and Justin Trudeau on the subjects of employment, trade and the environment. Also, has there ever been a better hashtag?

4. Her fighting words at Up For Debate

What was originally supposed to be a live spar between the four federal party leaders on women’s issues was  re-formatted as video interviews after Harper and then Mulcair dropped out. True to fact-checking form, May ripped her dudely opponents for not participating in the debate. She also called for a national strategy to combat violence against women and condemned the “testosterone-fuelled” atmosphere on Parliament Hill. Said journalist (and interviewer) Francine Pelletier, “May was a bit different because she gets it.”

The day before the election, May called for a less divisive atmosphere on Parliament Hill. “We need Green MPs in a minority parliament because we’re the only party committed to working across party lines,” she told reporters in Victoria. “We’re prepared to actually immediately start the work of being, for lack of a better term, matchmakers.” Funny, whip-smart and concerned about Canada. That’s the May way.

Related:
The 15 most ridonkulous moments of the election