On child care, the economy and why some women might have trouble attaining positions of leadership. 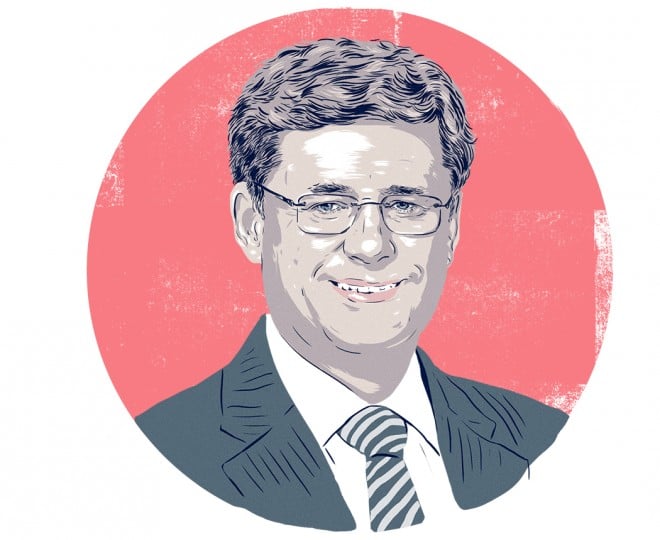 After three mandates and nine years in power, Prime Minister Stephen Harper should be the candidate we know best. Yet somehow he proves elusive, and often downright divisive: Is he the firm hand on the economic tiller, guiding us safely through choppy global waters, or is he slowly chipping away at the progressive values that define our country? We spoke with the Prime Minister in a rare one-on-one interview on September 7, shortly after the photo of a Syrian boy’s drowned body galvanized the world and an internal government report exposed harsh realities facing Canadian women.

This morning, the CBC reported on an internal report by Status of Women Canada. It’s a troubling portrait, stating that Canada is falling behind the developed world on women’s equality, and poverty rates are climbing for elderly single women and single-parent families headed by women.

I haven’t seen the report but I can tell you some contrary statistics. Under this government we have reduced child poverty to record levels. This government has brought in a record increase of the guaranteed income supplement for vulnerable seniors. We have the lowest levels of senior poverty, I think, ever. So I don’t know what the basis of that is. The metrics I’ve seen are good, but obviously we are always looking to improve.

The report states that Canada is lacking a comprehensive national strategy to address violence against women. You’ve often spoken about protecting the safety of women abroad, especially in discussing our military actions in Syria, so how do you reconcile these two approaches?

First of all, I would certainly take issue with that conclusion. No government has done more to focus on criminal violence against vulnerable people. We’ve put new funding into family-violence prevention, things like elder abuse. We’ve given our law-enforcement agencies increased resources to deal with these kinds of problems, and most importantly, we brought in a series of criminal-justice measures to deal with sex offenders, to deal with child abusers, to deal with those who commit violence generally, to make sure they are imprisoned and not easily released and pardoned. As a government we will do whatever we can to fight any kind of violence against women or other people.

Yes, tough-on-crime measures are in place. But what about the social causes of violence against women?

The agenda of the other parties and previous governments has been to look for social explanations but not actually deal with offenders, and that’s not acceptable to us. Criminal violence must be treated as such.

And how does that sit in relation to your policies about women’s security abroad?

You’ve raised the whole issue of the military mission against the so-called Islamic State, against ISIS, and the systematic violence that it and other jihadist groups are committing around the world. Obviously we’re involved militarily to prevent that and we provide humanitarian assistance. Part of our foreign policy in that region and others has been to focus on women’s equality, to fight against things like early and forced marriage and what we call barbaric cultural practices, like female genital mutilation.

The UN has called for an inquiry into missing and murdered indigenous women, and that same request has been made at home by various First Nations leaders and victims of violence, including 16-year-old Rinelle Harper. But you have said it isn’t “high on your radar.” Why isn’t it?

I haven’t said that at all. What I said is that—

That was in an interview with Peter Mansbridge.

We have done some 40 studies and we think the issue has been studied to death. Obviously this is still a disturbing phenomenon, which is why we put resources into prevention and investigation and into enforcement. It’s time to get on with action. We have a lot of studies and a lot of data and we haven’t really seen anything that says there are actually knowledge gaps there.

The Universal Child Care Benefit has been enhanced, but $160 taxable dollars a month won’t cover two days of child care in Toronto, where I live. Does the government have any responsibility to families beyond this benefit?

Absolutely. The government’s approach has been to really try and assist families with all types of child-care situations. In our own family, Laureen and I, raising our kids, we used a mix. Sometimes the kids were at home, sometimes they were cared for by their grandparents, and we used also local institutional child care part-time as well, which was actually a great a experience for the kids. So we try to have programs that will suit any kind of arrangement. I think the help is substantial. Does it pay for everything? No, of course not, but I don’t think anybody thinks the government is going to pay for everything.

A 2005 Royal Bank report estimates that, as a result of the gender pay gap, the annual lost-income potential of Canadian women is $125 billion. What role does government have in ensuring women receive equal pay for equal work?

As a matter of policy, our view is that there should be equal pay for work of equal value. Over 40 percent of senior executives in our government are female. With Minister [Kellie] Leitch at the Status of Women, we’ve been fairly aggressive in trying to push both government appointments in the public sector and greater representation for women on corporate boards and in senior positions. We’ll continue to pursue these changes. I think they’re positive for organizations. You kind of shake your head when you see organizations that aren’t embracing what is actually good for them.

How do you see the presence of women at the table affecting the work that you do?

It’s nothing but positive. The one observation I would make is I think, for whatever reason, women are often less aggressive in pushing themselves forward than men are, and not for any good reason I’ve seen, so this is obviously something we want to continue to encourage throughout society. I don’t think we should rest until women are fully equal partners in the management of organizations.

Yet the Conservatives have the fewest female candidates of the four parties in this election, at 18 percent. Is that something you’re hoping to address?

I don’t appoint candidates unless it’s a necessity. We have a fully democratic process. I think we’ve had a pretty good record in the past of having women actually run where they can be elected, and actually get elected, and so I think that’s the ultimate measure.

The Chatelaine Q&A: Elizabeth May

Canada usually accepts 10,000 refugees per year, but that’s still 1/60th of 1 percent of the total global refugee population. There has been criticism that we’re losing our reputation as a compassionate nation.

It’s based on nothing at all. On the contrary, Canada remains per capita, the largest refugee resettler in the world.

Look, in terms of refugees coming here, the government has been clear: We’re going to accept more and will find ways of expediting the process. But we’re also very clear that it’s not going to be first come, first served. It’s not just who can push their way to the front of the line. We’re going to find a process that makes sure that we have genuine refugees versus economic migrants and others, and we focus on the most vulnerable. Given that we’re dealing here with a war zone, and an area occupied by terrorists, we need to make sure that the country’s security is protected.

Statistics Canada data confirmed Canada’s economy slipped into official recession in the first half of this year. Of course, your election image is rooted in sound economic management. So how are we as Canadians to make sense of that contradiction?

Well, I think it’s actually pretty straightforward. The Bank of Canada itself has said we didn’t have a general economic contraction. On the contrary, in the first six months of the year, we actually saw employment growth, we saw government revenues increase and we saw non-energy exports increasing substantially. Really, what’s happened is there’s been a serious effect on the economy, on the regional economy, particularly in Alberta, due to the rapid contraction in energy prices. And I’m not trying to minimize that—

Yes, because for those people, it feels like a recession.

Yes, I know, I live in Alberta. It’s very real. And look, that’s an issue we’re going to have to deal with. We have had over the past few years a series of economic challenges thrown our way; this is the latest. Where other countries have had no job growth, have been cutting back on people in endless spirals of increasing debt and taxes, Canada has been the opposite: balanced budgets, lower taxes, greater benefits, and growing. The other guys are proposing that now is the time to spend tens of billions of dollars more and to finance that through tax increases or permanent deficits. And we would say that if you look around the world, that’s the recipe that every country that is failing has used. So we need to stay on the track we’re on.