The Biggest Moments From The 2019 Federal Election Leaders' Debate

We watched the unwieldy two-hour debate so you didn't have to. Here's what you need to know. 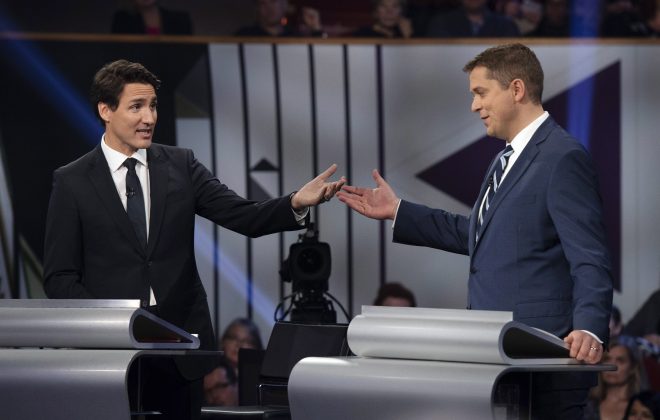 The two-hour debate was broken into categories, each given approximately 20 minutes: Leadership in Canada and the World; Polarization, Human Rights and Immigration; National and Global Leadership; Indigenous Issues; Affordability and Economic Insecurity; Environment and Energy. The moderators—CTV News’ Lisa LaFlamme, HuffPost Canada’s Althia Raj, the Toronto Star’s Susan Delacourt, Global News’ Dawna Friesen and CBC News’ Rosemary Barton—did their best to keep the candidates in order, but things got heated on more than a few occasions.

With exactly two weeks until the federal election on October 21, here are some of the most notable moments from the official English-language leaders’ debate:

Elizabeth May started with a land acknowledgement

The debate began with a voter’s question regarding how the leaders propose to effectively defend the interests and values of Canadians on the world stage. Each launched into their responses, but Green Party leader Elizabeth May was the only candidate to begin with a land acknowledgement recognizing that the debate was taking place on the traditional territory of the Algonquin people.

.@AndrewScheer, responding to @JustinTrudeau: "You seem to be oddly obsessed with provincial politics. There is a vacancy for the Ontario Liberal leadership, and if you are so focused on provincial politics go and run for the leadership of that party Mr. Trudeau." pic.twitter.com/uGQqo3gRMk

Andrew Scheer and Justin Trudeau targeted each other

The most frequent battles of the night were between the current prime minister and the current leader of the opposition—and it started off the top. In his opening response, Scheer described Trudeau as “a phoney and a fraud,” highlighting his history of blackface costumes, his firing of Jody Wilson-Raybould and Jane Philpott, the SNC Lavalin scandal and his tax policies. Trudeau later fired back at Scheer, accusing far-right PPC leader Bernier of saying publicly what Scheer “thinks privately.” This dynamic continued throughout the debate, with the audience laughing at one point when Scheer was given the opportunity to ask any leader any question and he dramatically turned to Trudeau.

Jagmeet Singh wondered why Maxime Bernier was there

With little support (it’s highly likely the PPC will win only one seat this election, if that) and zero elected MPs, Bernier was initially not included in tonight’s debate. He was added at the last minute after an investigation from the Debates Commission demonstrated the PPC had a significant chance of winning two seats—however, his presence was nothing short of controversial. Bernier has been vocal about “ending official multiculturalism,” curbing immigration, and as moderator LaFlamme noted, has called diversity in Canada a “cult, used “ghetto” and “tribe” to describe newcomers to Canada and described 16-year-old climate activist Greta Thunberg “clearly mentally unstable.”

During the “Polarization, Human Rights and Immigration” section of the debate, Singh responded to Bernier’s claims that his stance on immigration was simply a difference of opinion. “After a couple minutes of this debate tonight, I think people can clearly see why I didn’t think you should deserve a platform,” said Singh, later commenting that Bernier’s comments serve to “incite hatred” and that his ideas are “hurtful to Canada.”

While majority of the leaders—save for Bernier—agreed that the climate is a top priority, there was major disagreement over what targets are reasonable (and realistic) for combating climate change. “It’s not about rhetoric, it’s about a target that’s grounded in science and to do that, we need 60 percent reductions by 2030, not Mr. Singh’s 38, not [Trudeau’s] 30,” said May, asking Trudeau if he would move to create a non-partisan inner cabinet to address the climate crisis. (None of the leaders agreed to commit to this idea.) Trudeau responded by saying that “targets are not a plan,” and instead highlighted the Liberals’ intention to ban single-use plastics and their carbon tax plan—talking points he repeated throughout the debate. Other candidates responded by highlighting Trudeau’s tax exceptions for big polluters, his party’s oil and gas subsidies and its controversial purchase of the Trans Mountain pipeline. Moderator Rosemary Barton also noted that Trudeau did not answer her question regarding whether or not the Trans Mountain pipeline would be Canada’s final pipeline.

.@theJagmeetSingh on his climate plan: "You do not need to choose between Mr. Delay and Mr. Deny. There is another option." #elx43 #leadersdebate2019 pic.twitter.com/9NGNyVpyp5

Though access to abortion—or health care for that matter—was not one of the defined categories in the debate, it was raised towards the end of the night when Trudeau called out Scheer’s views (the Conservative leader says he is “personally pro-life”). The discussion descended into heated cross-talk among all the candidates. As they argued, Singh raised his voice and said, “A man has no place in the discussion around a woman’s right to choose.” May chimed in saying, “How about a woman’s right to speak in a debate?”—a response which prompted applause from the audience. She then pivoted into calling out the leaders for participating the TVA French language debate, despite the fact that she was not included.

When abortion came up at #LeadersDebate2019, all six leaders had something to say—in between the cross-talk, which briefly took over the stage. #elxn43 pic.twitter.com/xVvqOTMqhH

Elizabeth May calls it for the Liberals

.@ElizabethMay: "Voting for Green MPs is your very best guarantee, Canada, that you don't get the government you least want" #leadersdebate2019 pic.twitter.com/6E9qUmmXmB

The actual winner of the debate was Rosemary Barton

With multiple segments and moderators, questions from voters and a whole lot of cross-talk, the federal debate format got unwieldy at times. The tight timeline coupled with a stage full of unruly leaders made for a serious challenge for the moderators. But CBC’s Rosemary Barton took the crown for regaining control of the debate, ending the night on a high note.

Wow can @RosieBarton please moderate thanksgiving at my parents house this year? #leadersdebate2019