This captivating YouTube video shows what we are potentially missing out when we're too engrossed with our phones. 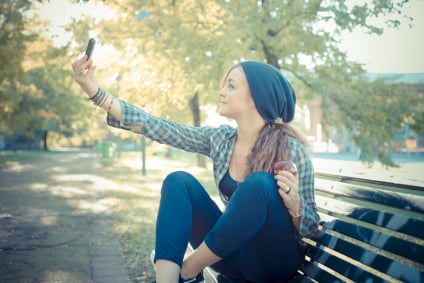 I get nostalgic whenever I happen across a rotary phone. We had a big beige one growing up that I begged my parents to get rid of. I would say, “But all my other friends’ parents have cordless phones . . . it’s the nineties for goodness sake!” It was pretty much the same argument I’d make the entire decade up until I bought my first pager. Ah, the pager. I was thrilled whenever I heard that beeper go off. Then I got my first cellphone and the pager was history — I was so glad I’d never have to make change for a quarter to use a pay phone ever again.

So it should come as no surprise that I was an early adopter of the smartphone. Suddenly I held the whole world in the palm of my hand, and connecting and sharing information was just a few easy finger taps away. What technology! I was in heaven. Then came Facebook, Twitter and Instagram apps, and soon the habit to share all my significant (and more often insignificant) moments became the norm.

But what happens when our primary focus becomes about sharing experiences rather than the experiences themselves?

The captivating YouTube video below illustrates exactly that. Creators Charlene deGuzman and Miles Crawford show how we’re potentially missing out on appreciating life’s experiences because of our fixation with our phones. I’m certainly guilty of checking my messages at the dinner table. I take photos at a concert and share them immediately on Facebook. I walk while I text.

This weekend, I invite you to put down your phone for just five hours. Could you do it? How long are you able to resist the urge before taking a peek?

What did you think of the video? Share your thoughts in the comments below.