Sometimes an event occurs that is so absurd, so downright outlandish that it defies mockery. Bristol Palin's appearance on Dancing with the Stars in a head-to-toe gorilla costume complete with pink tutu and heels was just such an event. 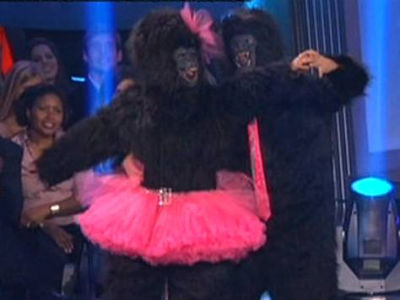 Sometimes an event occurs that is so absurd, so downright outlandish that it defies mockery. Bristol Palin’s appearance on Dancing with the Stars in a head-to-toe gorilla costume complete with pink tutu and heels was just such an event. There’s really nothing to be said except that Bristol Palin, daughter of former vice-presidential candidate Sarah Palin, danced on a nationally televised show in a full gorilla suit. With heels. And a tutu. Full stop.

You may have already heard about the Yale frat boys who last week caused an uproar when they stormed the campus for pledge week chanting misogynistic phrases like “no means yes” while holding signs bearing slogans like “we love Yale sluts.” The behaviour inspired a tornado of thoughtful discussion/wrath among intelligent women across the internet, as we debated why incidents like these still occur at places like Yale University, what it means, and how these men should be punished. As it turns out, the fraternity’s own board of directors beat us to it and have halted all pledge activities including the initiation of new members. Further punishment may be forthcoming.

Yesterday we discussed the precociousness of nine-year-old Willow Smith, whose impressive new music video “Whip My Hair,” has set the blogosphere afire. Today, we bring you Cecilia Cassini, an 11-year-old fashion designer with her own clothing line and the leopard-print hat and phony laugh of a fashion week hanger-on. It’s not that this level of mock-fabulousness is new, we’re just not accustomed to seeing it this fully developed until at least the teenage years.

The Saskatchewan government has approved $5 million trail of a controversial new therapy for multiple sclerosis. “Liberation therapy” uses a form of angioplasty to open blocked jugular veins in the necks of patients with MS, reportedly improving blood to flow to the brain. The procedure has been used for other conditions, but was first applied to MS sufferers by Italian vascular surgeon Paulo Zamboni. Saskatchewan is the first province to move forward with a clinical trial; the federal government maintains it is too early to do so, and much of the Canadian medical establishment remains skeptical about the effectiveness of the procedure.

Canada’s federal privacy commissioner has concluded that Google Street View cars broke privacy laws when they collected private data from the homes they were passing. The company says their cars inadvertantly scanned and gathered information from unencrypted Wi-Fi networks as they drove by private residences. The cars collected email addresses, user names and passwords, residential telephone numbers and addresses, and health details. The company apologized and was given until February 1 to delete the information.