Understanding the next generation 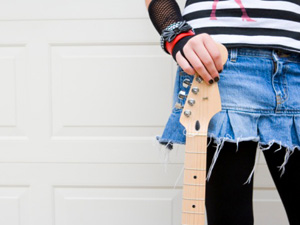 ‘I need to get it, fast!” my 17-year-old daughter, Arden, tells me. “It” is not a new pair of trendy jeans or the latest CD from Nelly Furtado. No, “it” is the HPV vaccine, the medical innovation that will prevent sexually transmitted infections associated with cervical cancer.

This is a mothering moment when I both want to know the details of what goes on in my daughter’s life and want to be able to sleep at night not worrying about what she’s doing and who she’s doing it with. I’m not a prude and will talk frankly with Arden, as my mother did with me, but I also try to avoid either of us ever having to squeal, “Too much information!”

Arden has always been a good kid, but at moments like this, I panic, just a little bit. I realize how different life is for teens today than it was for me when I was an adolescent in the 1970s. Despite having been one, sometimes I wonder if I really know anything at all about this mysterious creature called the teen girl, not to mention the next generation we are raising. So I decided to try to find out by putting my finger on the big issues in Arden’s life. Here’s what I discovered.

My daughter is smart about sex

I am relieved that Arden’s desire to get the HPV vaccine means she’s at least aware of safer sex, and that she is always honest and responsive when we talk about sexual matters. I’m not surprised that teen pregnancy is at an all-time low, but I am startled when she tells me that today the word “sex” refers only to intercourse. To her and her peers, oral sex does not count as sex – Bill Clinton’s influence, no doubt.

“Giving head at parties is pretty common. It’s not that big a deal,” Arden says. It’s not just my daughter who feels this way. A recent study shows that oral sex is winning the sexual popularity contest: 19 percent of Grade 9 girls have had intercourse while 28 percent of them have engaged in oral sex; by Grade 11, 46 percent of girls have had intercourse and 52 percent of them have had oral sex. Dr. Karyn Gordon, a teen life coach and adviser on TV’s The Mom Show, tells me that a lot of girls don’t think twice about sexual activity. “Often they don’t even like performing oral sex; they find it gross but they do it to please the guy,” she says. “They have the need for a boyfriend as a kind of trophy, even if he treats them like garbage.”

Even a confident girl has low self-esteem

I admire Arden’s nonchalance, but I also know there are times when she’s burst into tears when she can’t find something she thinks is flattering to wear. For all her usual poise, she definitely can fall prey to self-doubt. That’s not uncommon, says Dr. Gordon. “Low self-esteem is one of the biggest issues teen girls face, and it’s interconnected with body image, eating disorders and sexuality concerns,” she says. “Power is still centred around the body. Girls are more afraid of fat than of war or disease.”

Stats show that one in four teens between 12 and 18 have symptoms of an eating disorder, and 52 percent begin dieting before age 14. Women appear to have fought so hard to get their daughters out of the kitchen that their children are now afraid of eating.

She has a new definition of feminism

While I thought of feminism as a woman’s right to be treated equally with men and, yes, to decline to wear bras or makeup or shave her legs, Arden’s more relaxed definition reflects the hard-won gains of her ancestors: “Being a feminist means being comfortable in yourself and proud to make your own decisions and exist as a woman in society. It doesn’t mean that you have to reject the typically feminine. It’s about embracing, not rejecting.

She’s not, however, embracing the notion that there’s a very good chance that she and her sisterhood will still earn only 80 cents for every dollar that a man with comparable education and experience will make doing the same job. “I think by the time my generation is grown up and becomes the one making those important calls, that won’t be the case. It’s absurd to think it would be,” Arden says. “We’re taking gender less and less into account in deciding what we’re going to do and how we’re going to behave.”

She’s a traditionalist – sort of

Arden intends to go to McGill University in Montreal this fall and, for the moment anyway, hopes to pursue a career as an art gallery curator. She’s not ruling out getting married and having children, but to her the idea of the nuclear family seems to have ended with the Cold War.

“Ideally I want to have my own child with a solid life partner, and I like the idea of celebrating love and vowing to spend your life with one person, but I would also consider having a ceremonial celebration of that vow without necessarily going through the legal steps of a traditional marriage,” Arden says. “A lot of people my age feel as though marriage is an outdated concept or an unnecessary societal construct, and many people are also set on adopting rather than having their own biological kids.”

I love Arden’s graduation quote in her high-school yearbook. It’s a line from one of my heroes as a teen, Bob Dylan: “Dig yourself.” The words sound simple, but I think my daughter is getting close to living it, and it makes me feel sure of her bright future.