The only store in the city that carries chest binders is off limits to anyone under 18. That's a problem for the city's transgender youth. 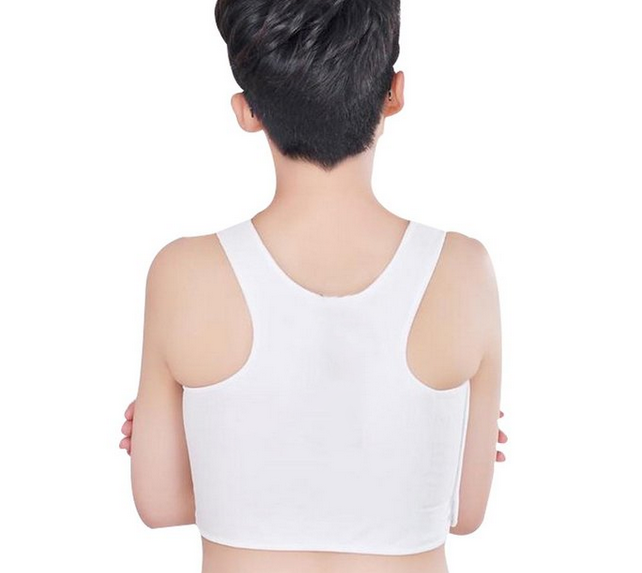 Chest binders compress breasts so they are as flat as possible. Photo, Amazon.

If your body doesn’t match your gender identity, the world presents an abundance of dangers. You can be harassed or attacked when you try to use a washroom. You can be hassled when you’re shopping for clothes in a store. You can be bullied by your classmates at school. You also have to reckon with the emotional dissonance of not identifying with figure you see in the mirror.

A chest binder looks like an extra-long sports bra and its purpose is to compress your breasts until they are as flat as possible — think extra-strength Spanx for your chest. Its wearers are mainly trans men (that is, someone who was labeled female at birth but who identifies as male), butch lesbians and others who don’t feel comfortable having the shape of their breasts visible underneath their clothes. While binders can cause skin irritation and constrict breathing, particularly for people with asthma, they are much safer than the DIY alternative of Ace bandages or duct tape. And for people who have not opted for a mastectomy — or who can’t afford one, or are too young to get permission — a chest binder can play a crucial part in living at little more easily and safely in one’s body and in the world.

Shelley Taylor, the owner of the Ottawa sex store Venus Envy, estimates that on a typical Saturday she and her staff sell between six or eight binders. But recently, after one was purchased by a minor whose parent notified a bylaw officer, Taylor was served with a $260 fine. The binder isn’t contraband, but local bylaws prohibit adult stores like Venus Envy from serving people under 18. One city councillor is now requesting that the bylaw be reviewed.

It’s unclear from the report in the Ottawa Citizen whether the parent was upset about their child’s gender identity or worried about them shopping in a sex store. Venus Envy, it should be noted, is a cheerful, feminist-minded, inclusive spot that promotes safer sex, consent and healthy sexuality, along with stocking vibrators and bondage gear. Not everything in the store may be appropriate for teenagers, but it’s not a sleazy or unsafe space. It is, however, the only place in the city that carries binders. For lots of young people, not having access to Venus Envy means they can’t get the binders they need — maybe because they don’t have a credit card for ordering them online, or because they’re scared to have the package delivered to their home.

The visibility of celebrity trans people like Laverne Cox and Caitlyn Jenner, as well as the increasing availability of health and social services for trans youth, in particular, can make it seem like equality and justice have been achieved. But as this binder bind reveals, there are all kinds of ways that trans youth are still limited and in danger when it comes to living as their true selves. According to a recent national survey on the health of transgender young people, two-thirds reported discrimination because of their gender identity, 70 percent reported having been sexually harassed, nearly two-thirds reported serious thoughts of suicide and more than one in three had attempted to kill themselves.

There is good news in the report: When trans youth had supportive adults, whether they are relatives or teachers in their lives, they were four times more likely to report good or excellent mental health, and far less likely to have considered suicide. Venus Envy’s Taylor says she hopes such adults will step up for trans kids in Ottawa. She’s put out word to see if there’s another way to make binders available to youth who need them and, already, people have offered to set up pop-up stores or buy them for kids themselves. Perhaps there’s hope that parent who complained will eventually come around. “We serve so many youth — mostly with their parents,” Taylor told the Citizen. “For us, it’s an emotional thing when we see a queer or trans kid with their parents, because they have the support that most kids don’t.”

Read more by Rachel Giese:
Pamela Anderson did a nude shoot at 48. BORING!
How is this still a thing?!
The Chatelaine Q&A: Liberal Party leader Justin Trudeau