When I moved back to Toronto, after living in Calgary for three years, I moved into a condo with my daughter. But everyone told me I needed a house, not just because the condo only had two bedrooms (and I work at home) but for my daughter, who should grow up in a house, in a neighborhood with other children. 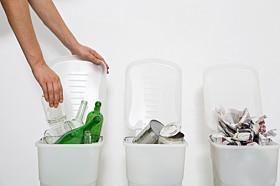 When I moved back to Toronto, after living in Calgary for three years, I moved into a condo with my daughter.

But everyone told me I needed a house, not just because the condo only had two bedrooms (and I work at home) but for my daughter, who should grow up in a house, in a neighborhood with other children.

So now I live in a house and I hate it. Really. I like the house, and the area, but I hate all the responsibility that comes along with being a single woman who owns a house. Especially when it comes to GARBAGE!

“Everyone who owns a house goes through this,” one of my friends consoled after I spent the night crying in the summer when my air conditioning broke and there were two leaks from my kitchen roof and I forgot about garbage day.

I REALLY don’t “get” the Household Collection Calendar I now have. I was CAUGHT throwing out a water bottle into the black garbage bag, by my brother, and was scolded. I DO care about the environment. I really, really do care about mother earth. I LOVE YOU MOTHER EARTH!

Am I the only one who finds the HOUSEHOLD COLLECTION CALENDAR one of the most difficult things to understand? (When you live in a condo, or a province that doesn’t seem to care as much, you don’t get these calendars that remind me of playing the game, “Where’s Waldo.”)

HOW CAN I NEED FOUR DIFFERENT BINS? AND HOW DO I KNOW THE DIFFERENCE BETWEEN FOAM POLYSTRYENE AND FOIL CONTAINERS when it comes to take-out? (which we do a lot!) And do I really have to take my old triple A batteries to a Drop-off Depot and what the heck does a downtown girl know from a Drop Off Depot anyway? Also, I rarely know what day of the week it is, so how am I supposed to remember to not only put out my garbage every Monday night, but also which bins. It really just makes me want to cry.

I called the number that says “Toronto at your service” to ask them the simple question WHY do you have to make this so confusing? Of course, “Toronto at my service phone line” was busy for hours. But I do have some self-learned tips.

1. Meet your garbage man. Seriously. This is the best thing I’ve ever done. I was nice to him and now he takes my bags, even if they are the wrong ones. I will get him a Christmas present.

2. Even if you are not a single mother, garbage people (usually men) will take pity on you and give you free passes.

3. Plug into your Blackberry every Monday (or whatever is your garbage/recycling day) that it’s time to throw out the trash.

Am I the ONLY one who needs a tutor when it comes to garbage pick-up? Do you have any tips?