If you thought Oprah Winfrey was going to end her 25-year reign quietly than you don’t know the queen of daytime TV. Her ego demands stadium seating on a good day, and on her last few days on TV the host had to rent out the United Center in Chicago. 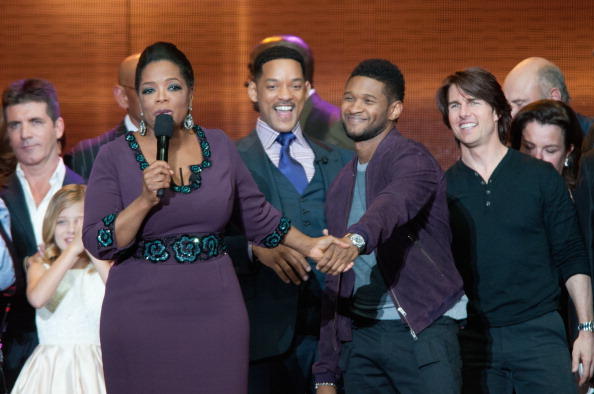 If you thought Oprah Winfrey was going to end her 25-year reign quietly then you don’t know the queen of daytime TV. Her ego demands stadium seating on a good day, and on her last few days on TV the host had to rent out the United Center in Chicago.

Details of her farewell spectacular—a two-parter airing May 23 and 24—have been released and the talk show host must have emptied out her address book because no star appears to have been left uninvited to the big event. Tom Hanks, Tom Cruise, Katie Holmes, Madonna, Beyonce, Halle Berry, Will and Jada Smith, Michael Jordan, and Jerry Seinfeld—the list goes on and on and on and on, and I get the feeling it’s going to feel that way when you watch the special.

There are live performances from such stars as Beyonce, Rosie O’Donnell, Alicia Keys, Usher and Rascall Flatts (yes, I had no idea Oprah was a fan of Rascall Flatts either), as well as lengthy moments of irony-free worship for the talk show host from her celebrity pals.

Oprah is praised for her contributions to education, awareness, and her cultural significance. Rest assured no human being has ever received or will ever receive as much adulation as Winfrey on this night. The souls of Dr. Martin Luther King, Jesus Christ and Gandhi may be circling the earth on May 23 and 24 wondering why they never thought of hosting a talk show.

At one point, Diane Sawyer reportedly informs the audience that 25,000 oak trees have been planted in Oprah’s honor.  If you’re wondering why oak it’s because the trees are considered a symbol of wisdom. If you’re wondering what that particular symbolism has to do with Oprah Winfrey, you’re officially my new best friend.

Apparently, the producers and organizers of the event felt the Oprah tributes would be so poignant that they graciously provided the audience with boxes of Kleenex in advance of the proceedings. No word on whether that care package included a couple of Gravol, but let’s hope a few other reactions were anticipated too.

Oprah’s starry farewell spectacular is going to put the Academy Awards to shame. The fall of the Berlin Wall is going to look like a home renovation project gone awry in comparison. Never in the history of television has there been such a send-off. Sally Jessy Raphael is going to be pea-green with envy. Geraldo Rivera will watch with the shades drawn. And Donahue? He may need one of those Kleenex boxes. Oprah is going off the air—sort of, she does have her own network now, right? And A-list attention is going to be paid.

I hate to admit it but I’ll be watching the farewell shows. My finger will be hovering over the channel changer just in case things get a little too spectacular for my tummy. But I’ll be watching all the same, which is a kind of tribute to the power of Mrs Winfrey all its own.