Two of my colleagues are dating, and it’s making me and my co-workers uncomfortable. What should we do? A job expert shares her advice 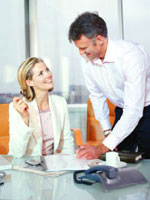 On-the-job relationships change the tone and climate of any work environment. You may feel as if you’re no longer one big team, but rather it’s the two of them and the rest of you. Or maybe it’s just plain annoying to stumble across those lingering glances, mood swings and whispered phone conversations. You may be tempted to ignore them, but the best course of action is to speak up.

So what’s the problem?

Meeting someone at work isn’t that unusual. (A 2002 survey by Human Resources Management students at Toronto’s George Brown College found more than half of respondents had had a workplace romance.) But there’s real potential for career derailment because bosses may question your professional judgment. Last year, I was working for an organization that was considering a woman for a major promotion, and her workplace relationship was raised as a big concern because the couple would have been part of the same management team. After much debate, the couple chose who would stay and who would transfer. In another instance, two managers ended a very public office romance, and the one who was dumped lost her job because she began to complain about her former partner.

If it’s boss and employee

No question, this is the worst possible situation for other colleagues. Many organizations have policies prohibiting this type of relationship due to the inherent conflict of interest. It’s best to ask your human resources department for help since it’s too risky to approach either of the lovebirds on your own. No HR? Go to your boss’s supervisor and calmly (or even anonymously) bring it to her attention.

The issue of co-workers in a relationship is still a grey area. It’s dealt with case by case, although companies do frown on the practice due to the perceived loss of objectivity and the challenge it creates for the rest of the working team. (Remember figure skating champions Lloyd Eisler and Isabelle Brasseur? They admitted their relationship got in the way of their skating until they ended it – and went on to win world championship gold.)

I think you should explain your discomfort to the happy couple – take them to a place where the drinks are stiff. You can certainly tell them you’re pleased for them personally, but that their relationship is a problem at work because you now feel you have to treat them as a duo. Point out that it’s better for them to handle this proactively (at minimum they need to be more discreet) rather than wait until the boss calls them in. If they shoot you down, approach your manager and then HR. Good luck!

Want to find the perfect job for you? Search a database of job postings, and find career advice here.