Pop quiz: who looks amazing at 68 wearing nothing but jewellery? Judging by the cover of the forthcoming “Who cares about age?” issue of V magazine, the answer is Susan Sarandon. The special issue features three separate covers featuring Sarandon, 64, Sigourney Weaver, 61, and Jane Fonda, 72. 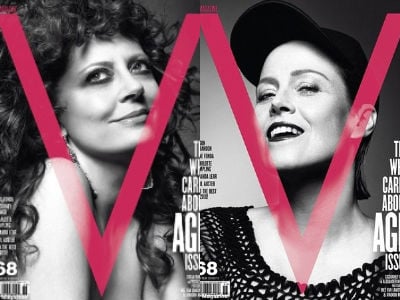 Pop quiz: who looks amazing at 68 wearing nothing but jewellery? Judging by the cover of the forthcoming “Who cares about age?” issue of V magazine, the answer is Susan Sarandon. The special issue features three separate covers featuring Sarandon, 64, Sigourney Weaver, 61, and Jane Fonda, 72. There’s an interesting juxtaposition of values here: while the magazine is clearly attempting to portray a non-ageist attitude that embraces older ladies as hot, these images appear to be airbrushed. So while we salute V for the effort, we also wonder why it appears they chose to show some and not all of these turbo-babes’ wrinkles.

Though deep down we know this shouldn’t really be considered news, this timbit set our donut-loving Canadian hearts aflutter. Tim Hortons has announced they will now be accepting debit cards. After years of holding out and forcing us to reach for the Mastercard or the dirty pennies at the bottoms of our purses, Timmy’s has finally given in and will be allowing customers to pay for their double-doubles with their bank cards. Rejoice!

Mark your calendars ladies! The date of the royal wedding has been set: Prince William and Kate Middleton will marry this coming April 29 at Westminster Abbey in London. British Prime Minister David Cameron has announced there will be a public holiday to celebrate the event. Barring a similar announcement from our own head-of-state Stephen Harper, it looks like we’ll be forced to secretively live-stream the momentous occasion to our cubicle.

Here’s something that may make you think twice before following in the footsteps of blond extension wearers like Paris Hilton and Jessica Simpson. A recent article in the New York Times describes the origins of a high percentage of the real blond hair used in North American hair extensions: poverty-stricken Russian women. The article explains that buyers “pay small sums for a head’s worth of tresses sheared from women who often have few economic alternatives.”

Progress has been announced on two fronts in the fight against HIV/AIDS. The UN announced yesterday that the global HIV epidemic has been “halted,” citing a drop in both new HIV infections and deaths from AIDS. While the international body reports that stigma and discrimination are still problems for the 33 million people living with HIV, they also report that last year there were 2.6 million new infections – down almost to 20 percent since 1999. In a separate study, researchers found that a drug normally used to treat HIV can actually help prevent infection. Though the findings so far have only been applied to gay men, the discovery could have widespread applications in the prevention of the deadly viral infection.