Four Women On How To Thrive In A Nunavut Winter

We spoke to four Nunavummiut women in and from Iqaluit about living in and loving the cold. 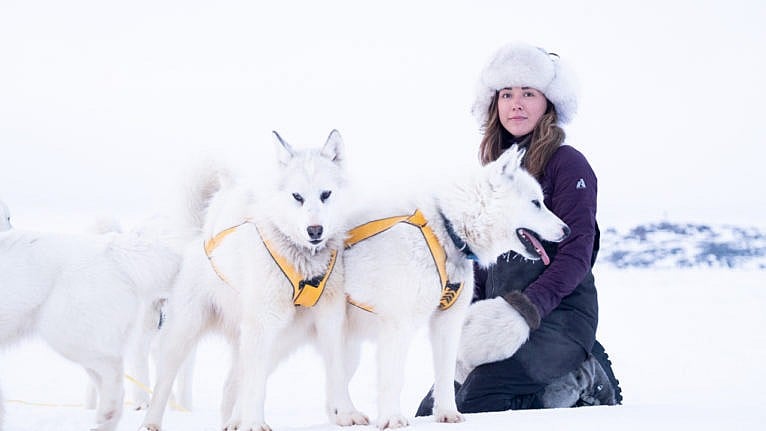 A lack of daylight, freezing temperatures, dangerously icy (or, alternatively, over-salted) sidewalks; winter can be a trying time in the best of years, and this past year has not been that. Tighter restrictions as coronavirus case numbers increased in the fall all but cancelled Christmas, and now the majority of Canadians are staring at what will likely be a long lockdown winter. But for the 39,353 Canadians living in Nunavut, “winter”—or at least, its hallmarks—started months ago.

Nunavut, which means “our land” in Inuktut, is almost entirely above the Arctic circle, meaning limited rainfall and average yearly temperatures in the negatives. But while southern Canada often approaches the season with apprehension, our northern neighbours are not merely surviving, but thriving — something I witnessed firsthand in the four and a half years I was lucky to call Iqaluit home. During that time, this previously city-dwelling immigrant from Bangladesh learned to relish the season, thanks to the local landscape and teachings. And it’s not just about putting on the right number of layers! To help us better appreciate the season, we spoke to four Nunavummiut women in and from Iqaluit about living in and loving the cold. 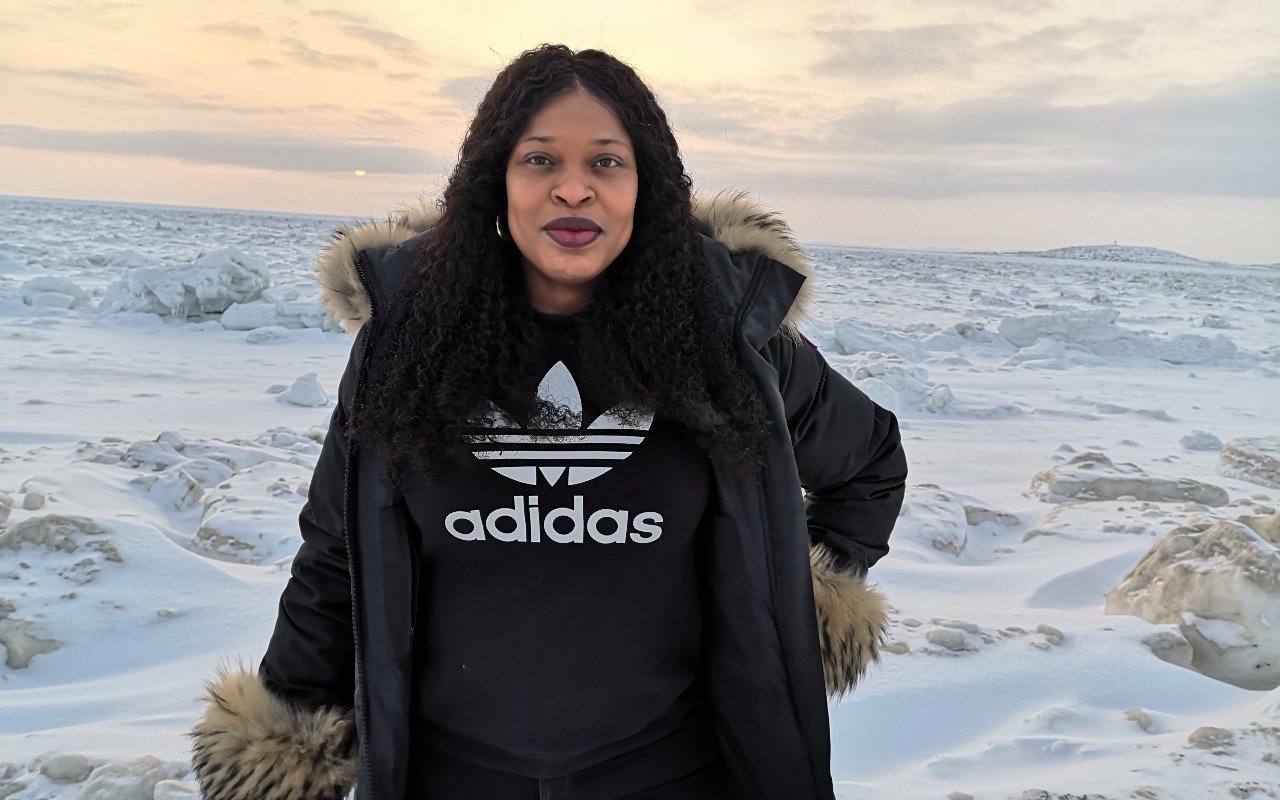 Stephanie Bernard moved to Iqaluit in June 2013, choosing the summer month because she thought it would be easier to acclimate. But as the plane touched down, Stephanie realized: “It was snowing the day I arrived.”

Since that startling introduction, Bernard has transitioned more smoothly into Iqaluit life. She is president of the Nunavut Black History Society, which runs Black History Month festivities and programming every February, and, after the murder of George Floyd and increased presence of the Black Lives Matter movement in the south in 2020, expanded its mandate to include social and political organizing. While the society centres Blackness and Black culture, she says, unequivocally, that they are also fighting for a more equitable and just society with and for Inuit. Her dedication to this cause was recognized when she received the city’s 2020 Community Development Award.

Still, Stephanie, who was born and raised in Kingston, Jamaica, isn’t quite used to the cold. “[Black] hair is made for a temperate…or tropical environment,” she explains, “and in the cold, our hair tends to break.” The dryness also gave Stephanie cracked hands and bleeding lips, so she immediately changed her self-care routines to help manage the cold.

But something else made her appreciate it: “Being here has taught me to a greater degree, that when people talk about climate change, it’s not a fallacy,” Stephanie says. “Because I see people here impacted by it. They can describe the changes.”

“I can see the changes,” she adds. When she first arrived, the mountain peaks on the other side of the bay were entirely blanketed in white. These days, there’s a noticeable lack of snow. While global warming affects all regions of the world, the Arctic is particularly sensitive to its impact. This is something Northerners have been clocking for years, from decreases in ice floes to dwindling caribou numbers to, as Stephanie mentions, the softening of the permafrost on which residents’ houses are built, homes developing cracks in their walls and ceilings as the land beneath them shifts.

Winter for Stephanie has thus become not something to overcome, but a reality to be revered—and this is something she thinks any Canadian can accept. “Changing our mentality and our mindset is the start.” She pauses to check on the current temperature in Iqaluit. “It keeps getting warmer. It’s about minus six degrees,” she murmurs. Then, excitedly, “Oh, no, actually, it’s gone down! It’s minus 26 degrees!” She is positively gleeful, laughingly noting the irony of a Jamaican celebrating below freezing temperatures in the double digits. But that’s the change her mind has made, she says.

“I love the cold for what it means for Nunavut.” 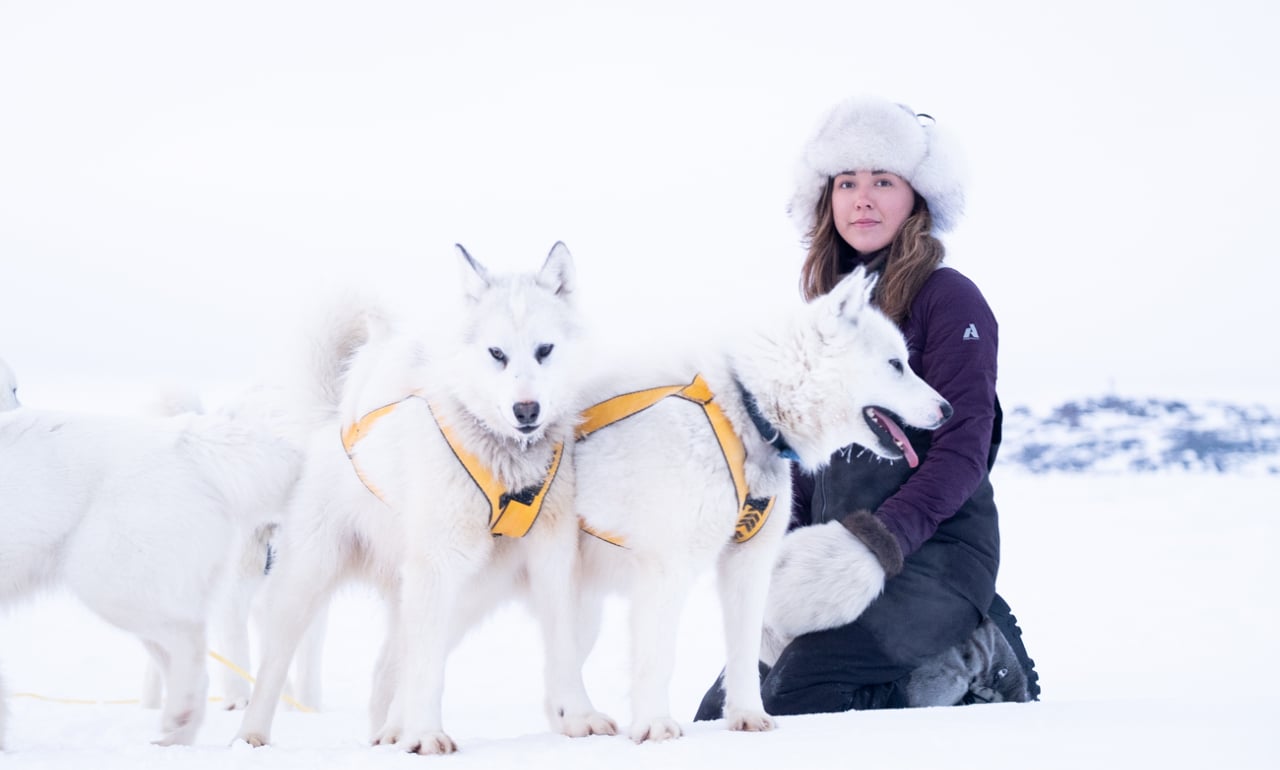 To hear Laura Pia Churchill speak of her earliest memories is to enter a beatific vision of life in and around Clyde River, a hamlet 750 kilometres north of Iqaluit on Baffin Island. Entire summers spent in a large canvas tent, learning to sew and searching for baby ducklings and lemmings; winters watching the men in her family cut through thick snow to hunt and fish. No wonder then, that after about two years backpacking and farm-working through South America, Australia, and New Zealand, Churchill wanted to come home. “I got really homesick,” she recalls, “missing my language and my culture.”

That was four years ago; Churchill, 21 at the time, returned to Iqaluit, where her family had been living since she was 13. She started dating someone (“a white guy,” she specifies) who was helping out with a dog team, and joined him on his duties. The relationship didn’t last, but her connection to mushing did. “This is what my people are good at,” she says. “And I wanted to reclaim that.”

She approached Meeka Mike, one of only two Inuit who owned a dog team in Iqaluit at the time, and offered to be her assistant. Mike agreed: after a time, she surprised Churchill with her own litter of husky puppies.

Running a dog team is not a fair-weather job. It’s during the coldest months that the dogs can pull the qamutik (sled) across the snow, and the animals are reliant on Churchill for everything from feeding to harness repair to love and affection. But the relationship, according to Laura, is reciprocal: “I work hard for my dogs, and they work hard for me in return.”

More than anything, the dogs have given Churchill a passage to her culture, and not only its reclamation, but its continuation. In the three years since she started mushing, Iqaluit’s number of Inuit dog team owners has gone from two to seven, including four teams whose starter pups were gifted by Churchill herself. She is president and founder of Qimussiqtiit Katimajingit, Iqaluit’s first dog mushers’ society, and received the city’s 2020 Arts and Culture Award for her efforts to educate Inuit youth on dog team ownership.

Churchill, whose determination comes right through in her North Baffin drawl, notes that the dogs also, quite simply, get her outside, and this is something she suggests for anyone trying to find the winter more appealing: see it as an adventure. “I go camping by dog team and travel and get to know the area [outside Iqaluit],” she explains. And she’s doing it in exactly the same way her elders did for generations on the tundra surrounding Clyde. 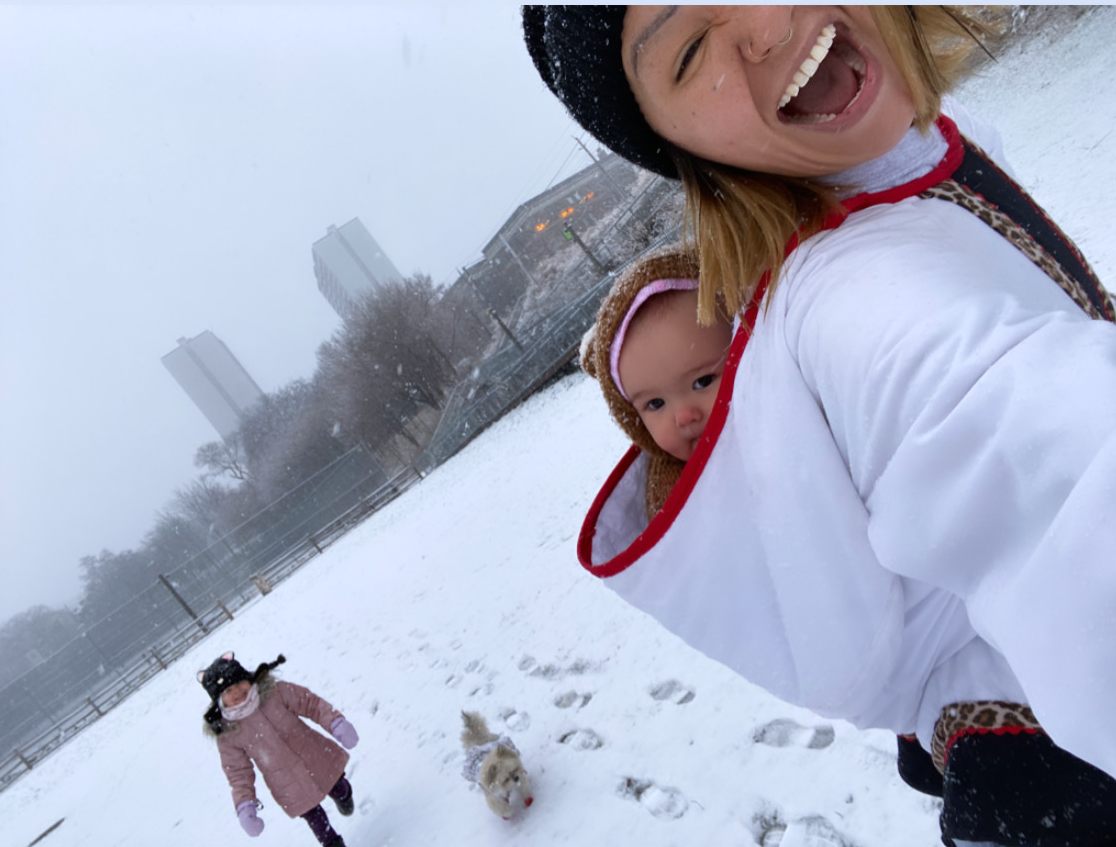 Winter looks a little different for Maika Harper now than it did when she was growing up. Gone is the pristine, endless tundra around her hometown of Iqaluit and the frozen fjords of Qaanaaq, Greenland , one of the northernmost towns in the world and a place she visited to see extended family. Harper traded all that in for the slushy greys of southern Ontario winters when, at 22, she moved to Guelph to pursue a theatre degree. Twelve years later, the now Toronto-based author, model, and actress, whose first major role was in APTN’s Mohawk Girls, still chuckles at city folk complaining about the cold. “I’m used to winter starting in September and going to June,” she reflects. “It’s my favourite time.”

As a northern transplant, she does have one tip for her southerly neighbours: take pleasure in your winter wear. For Harper, that means making cold weather clothing herself, from hats to mitts to amautiit, a parka with a pouch below the hood that Inuit women use to carry their babies. Learning to fashion your own gear, she believes, has a number of benefits. There’s the cathartic nature of sewing or knitting, cozy activities practically made for dark days spent indoors. And then there’s the satisfaction of gifting (or wearing) a handmade item, the pride that comes from knowing that the union of thread and fabric brought together by your own hands is protecting a loved one from the elements.

And, as a mother of three, Harper notes another enduring aspect of this craft. “I’m making sure that even in the city, my kids are adorned in their culture,” she explains, before switching to Inuktitut to comfort one of her children who, after waiting too long for our call to end, has scrambled onto her lap for attention. 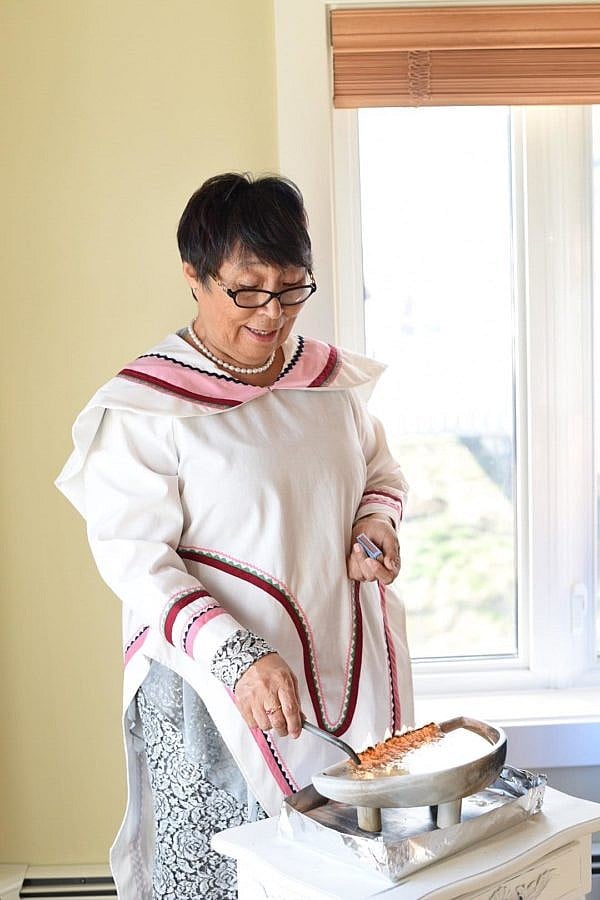 Growing up, the onset of colder temperatures offered new opportunities for Rhoda Ungalaq. “We would be so excited for snowfall,” she explains, “because we could travel again.” She was raised on the land, between Igloolik and Hall Beach, and snow created roadways for her family’s dog team to travel to parts of Nunavut well beyond their warm weather camps, bringing a literal change of scenery.

“Travelling in the wintertime, we would have a clean, brand new house every day,” Ungalaq recalls with a chuckle, referring to the fresh igloos her family built each time they stopped to rest along their route.

Not everything about being on the land was easy, of course. Ungalaq remembers harsh weather conditions and how much work it was to source enough food for everyone through hunting and trading. But both of these things taught her about resilience and adaptability.

“My school was my environment,” she says, and her parents and siblings her instructors. From them, Ungalaq—who was called “Ittuutaq” as a child, after her grandfather—learned to read and speak Inuktitut, Arctic survival skills, and a lifelong appreciation for education. Ungalaq moved to Iqaluit in 1988, earned a teaching degree, and worked at the primary and college level before switching careers to a cultural specialist, arts advocate and interpreter. She makes note of the rapid transformation of her lifestyle, from nomadic to settled to digital.

“We changed so fast,” she says of her generation of Inuit. “People were still traditional in the sixties; now I can talk to anybody in the world on Zoom.”

This ability to adjust to her surroundings has aided the soon-to-be grandmother of four (her latest grandchild is due in February) as she and her community have had to reckon with the profound impact of the pandemic. With an equal mix of pragmatism and care, she offers some simple advice:

“Our way of life is always revolving,” she says. “I don’t have any control over that, so I just ride it, and enjoy the changes.”