A roundup of the latest news: Google unveils 'Recipe View'; CBS pulls the plug on Two and a Half Men; what your car colour says about your personality; a five-year-old girl won’t get married until she has a job; and the space shuttle Discovery departs for its final mission. 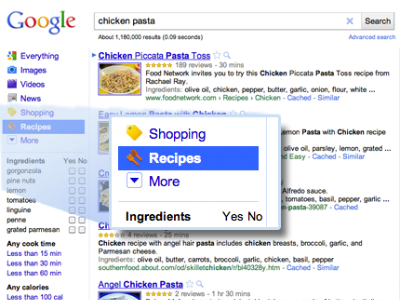 Google has just released a new search feature that will make recipe lovers very, very happy. Google Recipe View searches the internet specifically for recipes. You can search by the recipe name, by a specific ingredient, or even by a list of things you happen to have in your fridge, and you can even limit the ingredients included in a recipe. The internet just got a whole lot more delicious.

What does the colour of your car say about your personality? According to the head exterior paint designer at General Motors, it says a lot. Michelle Killen was at the Canadian International Auto Show this week, and took a moment to explain exactly what kind of person buys a black car, and who might opt for an orange model. She also says choices may vary by country: while Europeans like silver, in Asia the hot seller these days is pink.

Charlie Sheen has finally gone too far. The troubled actor’s drug use and pricey prostitute habits have been making headlines, but up until now CBS’s producers have been willing to forgive and forget, and were planning on resuming production of Two and a Half Men. That was before Sheen went on national radio and insulted the show’s creator, calling him a “turd.” Now CBS has announced it’s pulling the plug on the show for the remainder of the season. Apparently One and a Half Men just wasn’t going to cut it.

It’s important for a woman to have a job before getting married, at least according to one adorable five-year-old girl. Check out this viral video of a very feisty preschooler explaining why she won’t be marrying any man until she’s got her career sorted out. You’ll definitely laugh, and you may even learn a thing or two.

The final launch of NASA’s space shuttle Discovery took place yesterday, but not without a few nail-biting moments. A last minute problem with a computerized safety system threatened to derail the entire launch, which has already been delayed three months. Luckily, the problems were resolved with only three seconds to spare. This is the Discovery’s thirty-ninth mission, and will be its last.