How the DigniCap works; Americans are more generous than Canadians; Miss Senior America is smokin’ hot; a little boy’s complex diagnosis may be the future of medicine; and the “subway badass” speaks out. 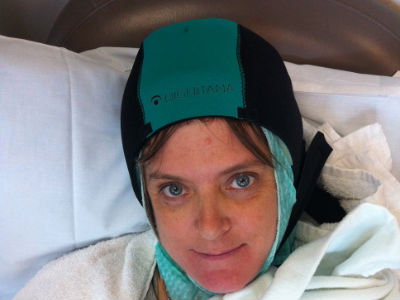 An experimental Swedish-made cooling cap may prevent hair loss for those receiving chemotherapy treatment for cancer. Dubbed DigniCap, the tight fitting cap contains a circulating cooling gel that lowers the temperature of hair follicles, reducing the amount of radiation they absorb. A small test is currently underway in the U.S., and blogger Heather Millar of Leftbreast.wordpress.com, pictured, has become the poster child for the new treatment after her anecdotes on the cap were featured on MSNBC.

According to a new study from the Fraser Institute, it turns out our neighbours to the south give more than we do. The study found that we give about 0.73 percent of our income to charity, while Americans give away 1.38 percent – nearly double. Time to pony up and give those Yanks a run for their apparently quite generous money.

We’ve all got an opinion of beauty contests like Miss America, but whether we see them as antiquated vestiges of a patriarchal society or worthwhile displays of femininity, it’s hard not to be charmed by the Miss Senior America contest, held this past weekend in Atlantic City. All contestants are at least 60 years old, and, judging from the video, are all pretty spry for their years. There’s tap dancing, singing and even a rousing Tina Turner impersonation. We know what you’re thinking, and the answer is no – there is not a bathing suit competition.

Six-year-old Wisconsin resident Nick Volker suffers from a rare disease that doctors were unable to diagnose for years. Close to death hundreds of times, physicians misdiagnosed and treated him for a number of conditions that he did not have. Finally, a team of doctors sequenced his entire genome and discovered a rare genetic defect treatable with a chord blood transplant. Diagnosing by gene sequencing is a new practice, and some say Nick’s diagnosis and treatment represent the beginning of a new era of medicine.

You may remember the “subway badass” from a few months ago. She’s the woman who shouted down the man who exposed his penis to her on a New York subway and got him arrested. Now she’s going public. Nicola Briggs has come forward and identified herself and has even made a video advising other women on how to protect themselves from would-be subway offenders. Watch and learn.