Including The Dig, a British period film starring Carey Mulligan and Ralph Fiennes. 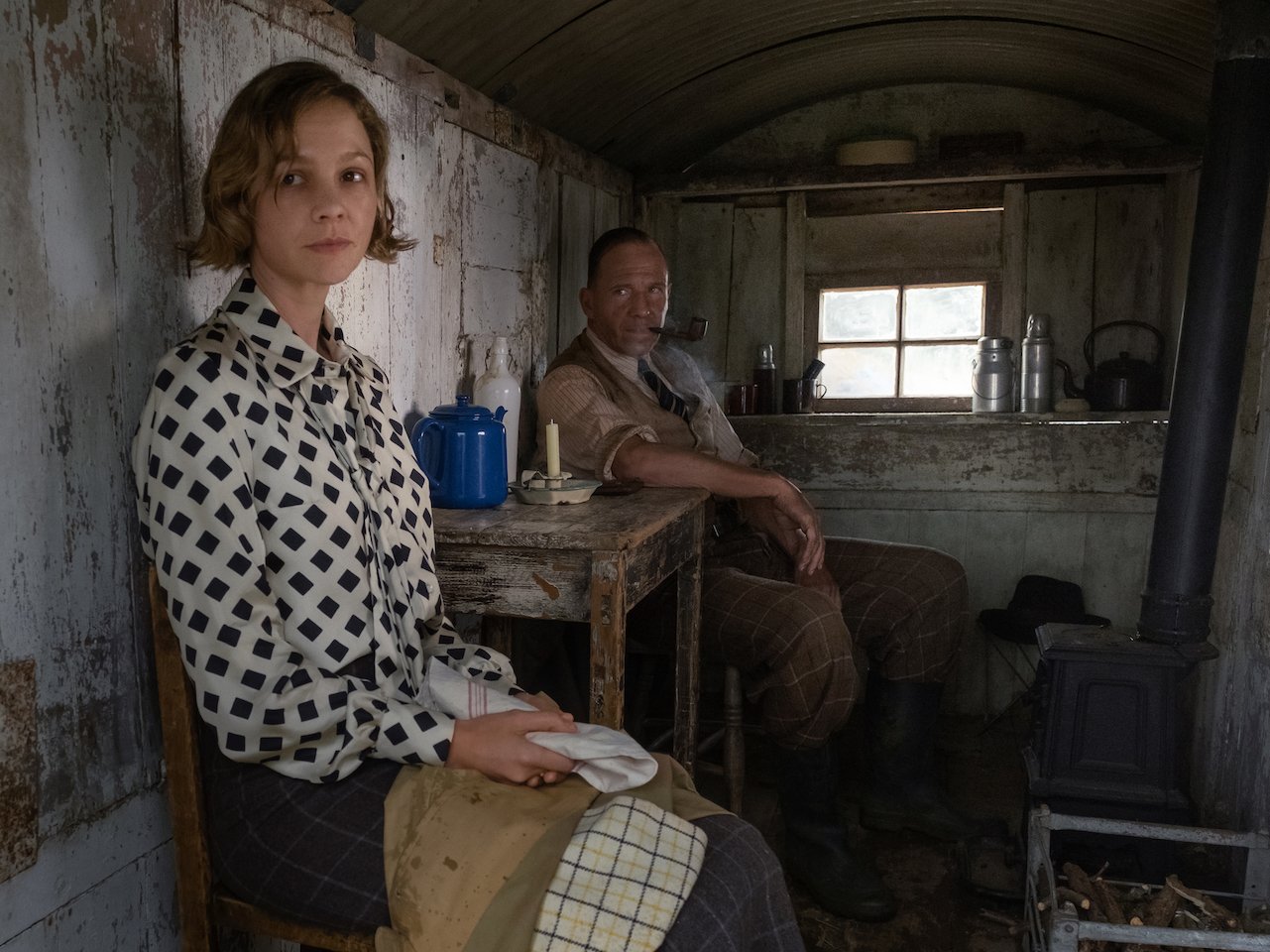 What You Should Watch

History of Swear Words (January 2): Nicolas Cage comes to Netflix in a typically quirky way, as the host of a six-part documentary series about the origins and history of six words, only one of which—“damn”—we can print in a family publication. Guests include both academic experts who can discourse on the origin of the words, as well as people like Sarah Silverman who are intimately familiar with using them.

Pretend it’s a City (January 8): In 2011, Martin Scorsese released Public Speaking, a documentary about Fran Lebowitz, the snarky writer who has become one of New York City’s most famous humorists and sought-after public speakers, even though she has writer’s block and hasn’t published a book in decades. After giving her a small part in The Wolf of Wall Street, Scorsese is back with this documentary series, where he sits down with Lebowitz to get her views on various subjects, but particularly the city they both love the most. Though as the title implies, Lebowitz may give New York some tough love.

Fate: The Winx Saga (January 22): Animaniacs isn’t the only recent show that’s aimed at adult viewers of a children’s cartoon, and Riverdale isn’t the only gritty reboot of a not-so-gritty franchise. The Italian cartoon series Winx Club, created by Iginio Straffi, ran from 2004 to 2019 in two different incarnations, becoming a major hit in both Italy and America with its Harry Potter-esque story of the students at a school for magical fairies. After the animated series ran its course, Straffi moved into live action with a show that he described as “edgier and darker” than the original, aiming to appeal to grown-ups who watched the original incarnation when they were kids, though the basic setup is the same: a novice fairy, Bloom (Abigail Cowen), arrives at the school and has adventures with her new magically-powered roommates.

The Dig (January 29): The Crown may be on hiatus, but Netflix will never run out of British period pieces with well-regarded actors. This film takes place in the England of 1939, where Edith Pretty (Carey Mulligan) asks archaeologist Basil Brown (Ralph Fiennes) to find out if there is anything interesting on a plot of land she owns, and their lives are changed forever when it leads to the discovery of a gigantic ship that served as a medieval burial site. The film (originally announced with Nicole Kidman in the role of Edith) is based on John Preston’s 2007 novel of the same name, which (like The Crown) uses real people and events but feels free to make things up if it makes for a better story.

Indonesian filmmaker Noviandra Santosa directed this movie about a stray dog adjusting to her new home.

Netflix has something in every genre, including the genre of self-promotion: a panel of comedians, including David Spade, London Hughes and Fortune Feimster, convenes to chat about the shows and movies we should be watching on Netflix.

Hosts Shea and Syd McGee, who run an interior design company based in Utah, show their guests how to get homes that are perfectly suited to their needs.

This animated series is the first of three shows that Netflix is producing with the creators of Headspace, the meditation app. In eight episodes, the co-creator of the app gives us an illustrated lecture on how to make our lives calmer through a few minutes of meditation per day.

Joshua Fields Millburn and Ryan Nicodemus, creators of the book Minimalism and the Netflix documentary of the same name, return to advise us to own as little stuff as possible.

In this drama about a group of siblings vying to take over their father’s business empire in Mexico, the characters have new competition in the form of their cousin Sofia (Fernanda Castillo).

Cha In‑pyo Cho Dalhwan plays a washed-up movie star whose attempts to revive his career are complicated when he gets stuck in a crumbling building.

Another entry in Norway’s answer to the Fast & Furious franchise, in which Roy (Anders Baasmo Christiansen) enters a car race in Germany after being jilted by the woman he loves.

Animated/live action hybrid series from DreamWorks, based on the preschooler book The Little Dollhouse by Jan Lebeyka, about Gabby (Laila Lockhart Kraner) and the talking animals that live in her dollhouse.

The Mexican edition of Netflix’s baking series, where amateur chefs get to be humiliated by trying to bake cakes from hard-to-follow recipes.

Documentary series, based on a book by Leslie Kean, which tries to examine the mystery of what happens after death by talking to people who were declared dead and then revived.

The Mummy: Tomb of the Dragon Emperor

Pieces of a Woman — NETFLIX FILM

Martin Scorsese executive-produced this film adaptation of the stage play by Kornél Mundruczó (who directed the film, in his first English-language effort) and Kata Wéber (who wrote the screenplay), starring Vanessa Kirby as a woman trying to deal with the aftermath of losing a baby in childbirth.

A Canadian take on the animated fairy-tale musical, with the voice of Wilmer Valderrama as Prince Charming, who is cursed to lose his charm unless he finds his true love.

The adaptation of Laura Gallego’s The Idhún’s Memories reaches the second of three parts, where the young wizards have grown up a bit but are still learning more of their connection to the magical world of Idhún.

British journalist Raphael Rowe was once wrongfully convicted and sent to prison; now, in this reality series, he gets paid to spend time in high-security prisons around the world.

The ’80s nostalgia boom is going strong with this continuation of The Karate Kid, with Ralph Macchio and William Zabka reprising their film roles and leading rival groups of Karat Kids.

Assane (Omar Sy) finds himself following in the footsteps of the classic French gentleman-thief character of Arsène Lupin, and uses his Lupin-like thievery skills to rob from a rich family that killed his father.

A special edition of the Indian animated children’s series, which follows the character of Bheem (from the series “Chhota Bheem”) as a baby.

Engin Günaydin plays Aziz, a man trying to navigate a midlife crisis, in this comedy film from Turkey.

Documentary filmmaker Stanley Nelson (Freedom Riders) directed this documentary about the 1980s crack epidemic and the devastating impact on Black and Brown communities, both from the epidemic itself and the government response to it.

Night Stalker: The Hunt for a Serial Killer — NETFLIX DOCUMENTARY

Documentary about Richard Ramirez, the serial killer who terrorized Los Angeles in 1984-5, and the detectives who were on his trail.

Reality show about a group of Asian and Asian-American millionaires in Los Angles, and the secrets and conflicts beneath their carefree and expensively-dressed façade.

Another batch of episodes from the reboot of the edutainment franchise, where Carmen continues to travel the world and teach us about landmarks, but this time the stories are slightly more serialized.

Ten more episodes from Matt Groening’s animated series about Bean (voiced by Abbi Jacobson), who deals with the comedic complications of being a princess in a fairy-tale kingdom.

Maisa Silva plays a teenager, raised in a hippie commune, who takes advantage of her mother’s absence to sneak out into the outside world in search of the father she never knew.

Outside the Wire — NETFLIX FILM

Mikael Håfström directed this science-fiction drama, starring Anthony Mackie as a robotic military officer in a futuristic world that’s in danger of being blown up.

Animated series about kids who can turn into ninjas and have family-friendly, educational ninja adventures.

Ludwika Paleta and Paulina Goto star in this comedy series about two women from different social worlds who discover they have accidentally been raising each other’s babies.

Documentary about the real-life espionage gadgets made by real-world equivalents of Q from the James Bond films.

The final six episodes of the series about the adventures of four agents at a major talent agency in Paris.

Weekly re-broadcasts of the CW series that has managed to make an edgy, dark version of Archie Comics more famous than the squeaky-clean originals.

Is it possible to find new topics for a reality competition show? Canada proved it was, by giving the world this show where contestants compete in the art of glass-blowing.

In this mix of reality and scripted TV (to the extent they can be separated), a group of South Korean celebrities are asked to solve mysteries in every episode, leading up to a big season-ending episode where a bigger mystery is solved.

Last season on the serialized animated Jurassic Park spinoff, a dinosaur park turned out not to be as safe for humans as advertised. This season, the characters continue running from dinosaurs.

So My Grandma’s a Lesbian! (Salir del ropero) — NETFLIX FILM

Spanish director Ángeles Reiné helmed this film about an elderly woman who comes out as a lesbian and schedules a wedding with the woman she loves.

Adaptation of the Man Booker Prize-winning novel by Aravind Adiga, about a young man (Adarsh Gourav) who will do just about anything to work his way up from poverty to wealth.

Animated series based on the classic children’s book by P. D. Eastman, about dogs who drive cars.

Even before the pandemic, Netflix sure had a lot of series about humans who go through apocalyptic events. This series, starring Jennifer Connelly and Daveed Diggs, is about a group of apocalypse survivors who are confined to a train that perpetually circles the Earth.

A former hitman (Frank Gerrish) masquerades as a tailor in order to hide from his ex-bosses in this eight-episode series from Turkey.

Naomi Watts stars in this film, based on a true story, about a woman left paralyzed after an accident and the little magpie (the title character) who helps her and her family appreciate life again. Directed by Glendyn Ivin.

Lluís Quílez directs this thriller, set against an icy landscape, where a cop does battle with criminals who want to stop him from taking one of their own to prison.

Kea Peahu and Alex Aiono play two Hawaiian-American teenagers who spend a summer in Oahu and find it more exciting than they anticipated. Directed by Jude Weng and written by Christina Strain.

We Are: The Brooklyn Saints — NETFLIX DOCUMENTARY

Rudy Valdez, who won an Emmy award for producing the documentary “The Sentence,” directed this four-episode series about a football program for young boys in inner-city Brooklyn.

Harry Potter and the Order of the Phoenix

Harry Potter and the Half-Blood Prince