Naomi Klein Has An Answer To The Climate Crisis

Her new book, ‘On Fire,’ prescribes legislative and personal solutions to stop a global calamity. 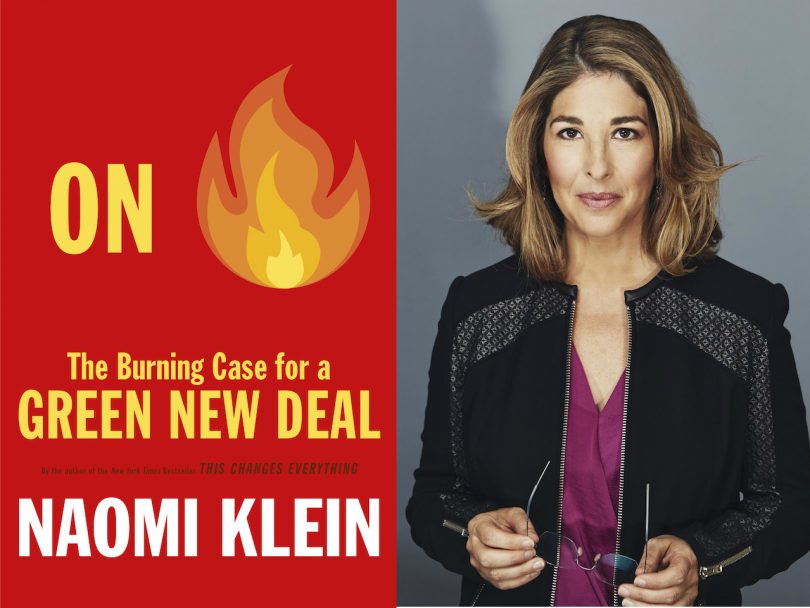 This month, the original antiglobalization activist Naomi Klein releases her latest book, On Fire. Here, she discusses the urgency of the climate crisis, avoiding Instagram and the personal responsibility to consume less.

Four years ago, you released The Leap Manifesto—a blueprint for how Canada should begin to tackle climate change. One election cycle later, how are we doing?

I would say we’re still not having an honest conversation about climate change. The approach of the governing Liberal party and of some of the provincial NDP governments has been, “We’re going to do some things to reduce emissions but not too much, not too soon.” It’s left people confused and unmotivated, and it’s left Canada failing to meet our own inadequate targets that were set under the Harper administration. Meanwhile, climate change is becoming more and more real for more and more Canadians—if you’re on the west coast and your summers have become seasons of smoke, climate change is no longer this abstraction where we’re worried about theoretical children of the future. It is here.

For starters, they are providing a sense of mission. For as long as we’ve been talking about climate change, the idea has been that we’re going to act on it within the framework of a free market economy with market-based half measures like a carbon tax or cap and trade. With the GND, they’re talking about a new framework—an infrastructure plan that is about changing the bones of our [carbon-emissions-reliant] economy. It’s about transforming transportation and how we get energy, and really changing how we live. People worry about what’s going to happen to certain jobs, but there is also an opportunity to create new jobs. So maybe the tar sands worker is transitioning from oil and gas to renewables. In the end, the biggest issue might be a labour shortage.

A combination. If you want people to take a leap, there needs to be somewhere to leap to, otherwise you’re just jumping up and down. So what does action look like? Too many Canadians associate climate action with their electricity prices going up or paying more at the pump. They think it’s all loss, but there are real benefits. And, honestly, is the status quo really working for anyone? Are we happy with the level of inequality we have in the world? Are we happy that so many communities are drinking contaminated water and having their rights disregarded again and again?

You have said climate change isn’t just an economic crisis but a spiritual one. How so?

The story we were told about our place on the planet is a lie—an illusion of apartness from the natural world. As anyone in Puerto Rico can tell you, we are not in charge of nature and we are not apart from nature. Coal created this delusion that we could control climate and collapse geography, and all the while, we’re emitting carbon into the atmosphere. And after a few hundred years, that response is ferocious and puts us in our place.

Critics of the GND say it’s an impractical pipe dream. How do you respond?

To them I would say, what’s your plan? We need a strategy, and it needs to be one that engages with the best science. We have a lot of pundits who know a lot about politics and very little about climate science. It comes off as very serious because they’re all wearing suits, but it’s really a joke.

One of the essays in your new book, On Fire, talks about how climate action is incompatible with our current culture of “perpetual now.” Why is that?

It just feels like not the best timing that the climate crisis is coming on humanity’s radar at this point when we’re all disappearing into our screens. What is that doing to our ability to focus and our ability to connect with the world around us? When you look back at the original New Deal, which was a response to the Great Depression, Roosevelt prioritized getting kids out into forests and farms doing soil-conservation work, planting trees. They learned to appreciate the natural world. That connection is something that needs to be re-established.

So, wait—you’re saying people could enjoy nature without posting pictures of it on Instagram?

You don’t think it’s possible? Okay, maybe there would be limited selfie time, but then they’d go back to restoring the wetlands.

Your seminal book No Logo came out 20 years ago, prompting some of the first conversations around sustainability and ethical branding. Do you feel proud?

There are now ethical brands and radical transparency, and that’s great, but it’s still really a niche market, and capitalism is an incredibly resilient system. We’re still dodging the deeper question around how much we consume. I think what may be one of the more significant shifts is the growth in second-hand, or consignment, or whatever the fancy word is now. We all know the three Rs, but the only one that stuck was recycle, because it’s the one that allowed us to keep consuming endlessly. And now we’re hitting the wall, and China is saying, “We don’t want any more of your garbage!” It’s just not tenable to consume this much. Repairing is another important R. And refusing.

What measures do you take to control your personal carbon footprint?

First, I think it’s important to say that the idea that we’re going to fix the climate as individuals, in some ways, is part of the problem. We need political organizing to win massive regulatory change, massive legislative change. Which is not to say I don’t make an effort. Part of the reason I accepted the position as the inaugural Gloria Steinem chair at Rutgers is because I was living an incredibly high-carbon lifestyle, travelling around the world, doing speeches. These days, I’m flying less and thinking harder about it when I do. I don’t eat dairy and I’m a vegetarian. I ask myself hard questions about whether I really need to buy that thing or whether I’m just feeling insecure that day. And I’m also a mom, so a lot of what I do in the day-to-day is about raising a human who cares passionately about our planet.

Any tips for parents trying to do the same?

I’m not a fan of exposing kids to the scarier parts of the environmental crisis at a very young age. I do talk to my son about pollution. But it’s really important that their first encounters with the natural world are not traumatizing, and I do worry that a lot of young people are simultaneously learning about animals and extinction, so that the whole natural world becomes a place of loss and peril. I think the number 1 most important thing we can do for our kids is help them connect to nature and their sense of wonder. We can only fight to protect what we love.