My Wife And I Gave Birth 3 Weeks Apart During COVID

What it's like to be pregnant, give birth and take care of a newborn at the exact same time as your spouse. Oh, and there's also a pandemic. 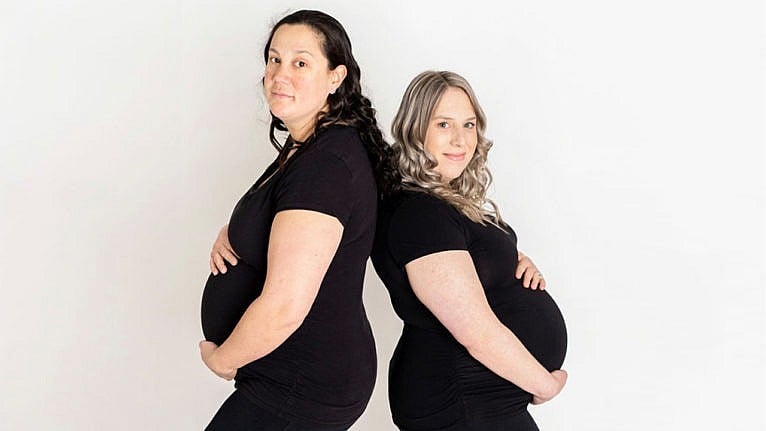 In 2019, married couple Cara Deszcz and Natasha Lee both got pregnant at almost the exact same time via IVF, and ended up delivering their babies just a few weeks apart—and right at the onset of the first COVID-19 lock-down announcement. We spoke to the Ottawa couple to find out what that’s been like and how it happened.

Cara: Early in our relationship, we knew we wanted to start our own family. Natasha conceived through IVF and carried our first child, Alyssa, who’s now three years old. This time around, I really wanted to carry our child. I tried IVF for several months, to no avail. Then Natasha’s named showed up on the provincial IVF waiting list and we both said, “Let’s just try together.” And it worked!

Natasha: When we first shared the news to our friends and family, everyone was shocked. They literally couldn’t believe it.

Cara:I gave birth to Aria on March 19, 2020. Natasha gave birth to Easton three weeks later, in April. We used sperm donors. The ethnicity of the donor was important to us. I am Polish and Canadian, and Natasha is Chinese, Jamaican and Ukrainian. We wanted to make sure that our donors had a mixture of everything. Aria’s donor is Chinese and Russian, and Easton’s, as well as Alyssa’s donor, is Hawaiian and Polish. 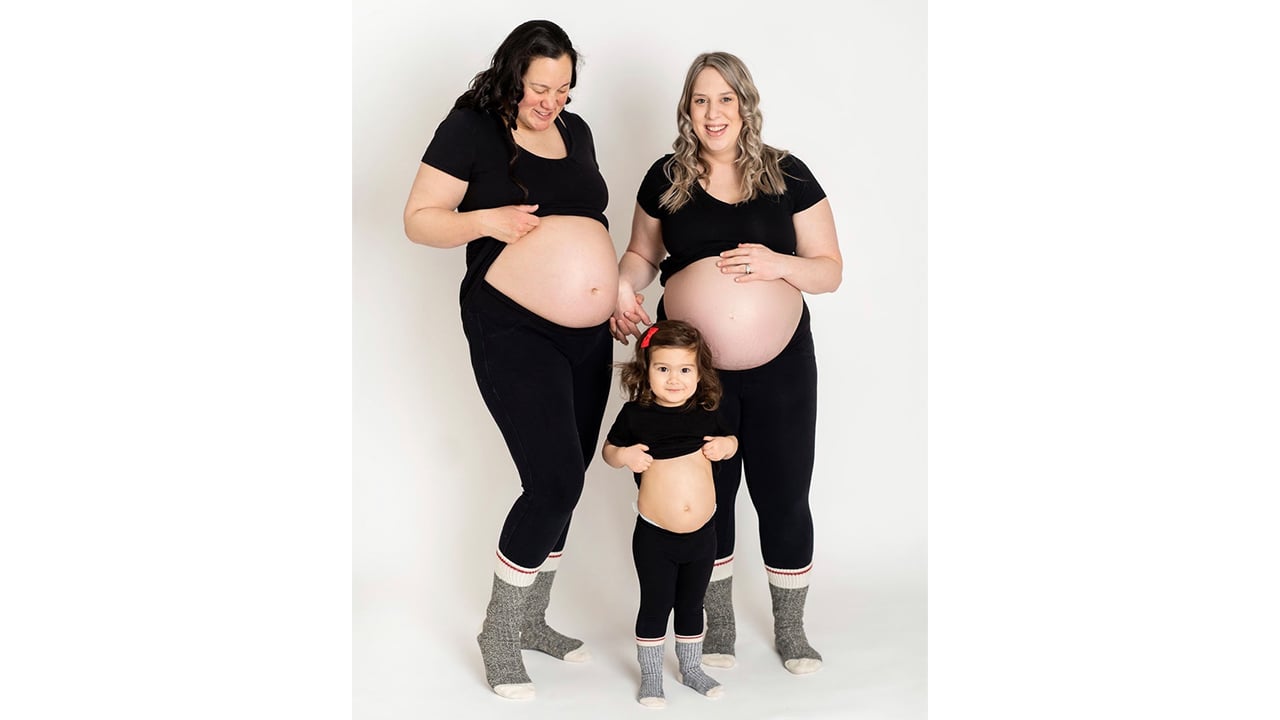 Natasha (left) with her wife, Cara, and their daughter, Alyssa. (Photo: @Renaudphotography18 via Instagram; Courtesy of Cara Deszcz)

Natasha: Being pregnant at the same time was incredible.

Cara: We shared the same OB-GYN and we did all our appointments together. Sometimes our OB would get confused! It was tricky at some points. I had evening sickness and Natasha was sick in the morning. I also had a migraine for the first 30 weeks of my pregnancy. The last few weeks were, fortunately, bearable. 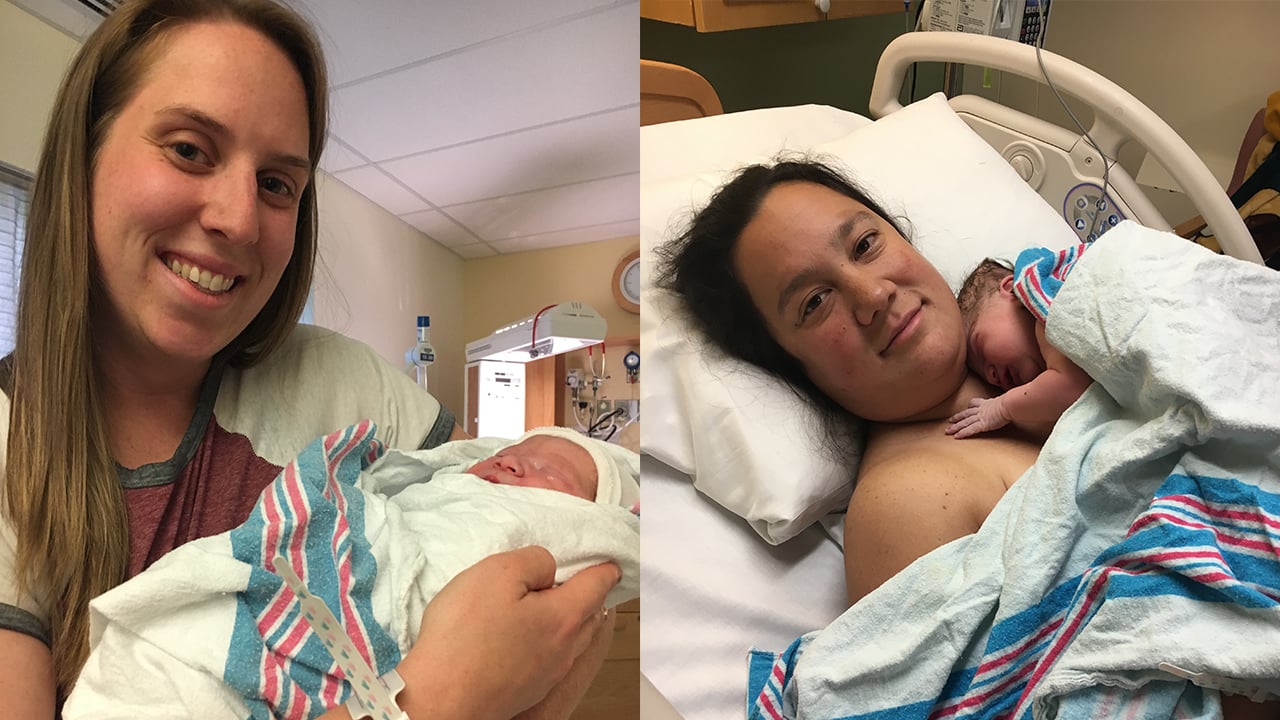 On managing two births during a pandemic:

Natasha: When we first heard about the pandemic, we didn’t take it seriously. We thought, maybe it will pass in a couple of months. So in the beginning, we were like, we’ll get through this. It got difficult when we eventually learned that we’d be in this for a long time, and would have very limited help.

Cara: We were told we couldn’t have anyone with us during the delivery because of the pandemic, and going into labour at the exact same time would have added a new layer of complications. I kept telling our doctor that I wanted to get induced as soon as I possibly could. In the end, my parents looked after Alyssa when I went into labour, which was about a week after COVID-19 was declared a pandemic. And then they looked after both Alyssa and our newborn, Aria, when Natasha went into labour in early April. They live nearby, unlike Natasha’s parents, who live in a different town.

Natasha: When the babies were born, many of our friends and family offered their support, but because of the restrictions, we had to operate with our small bunch of people. 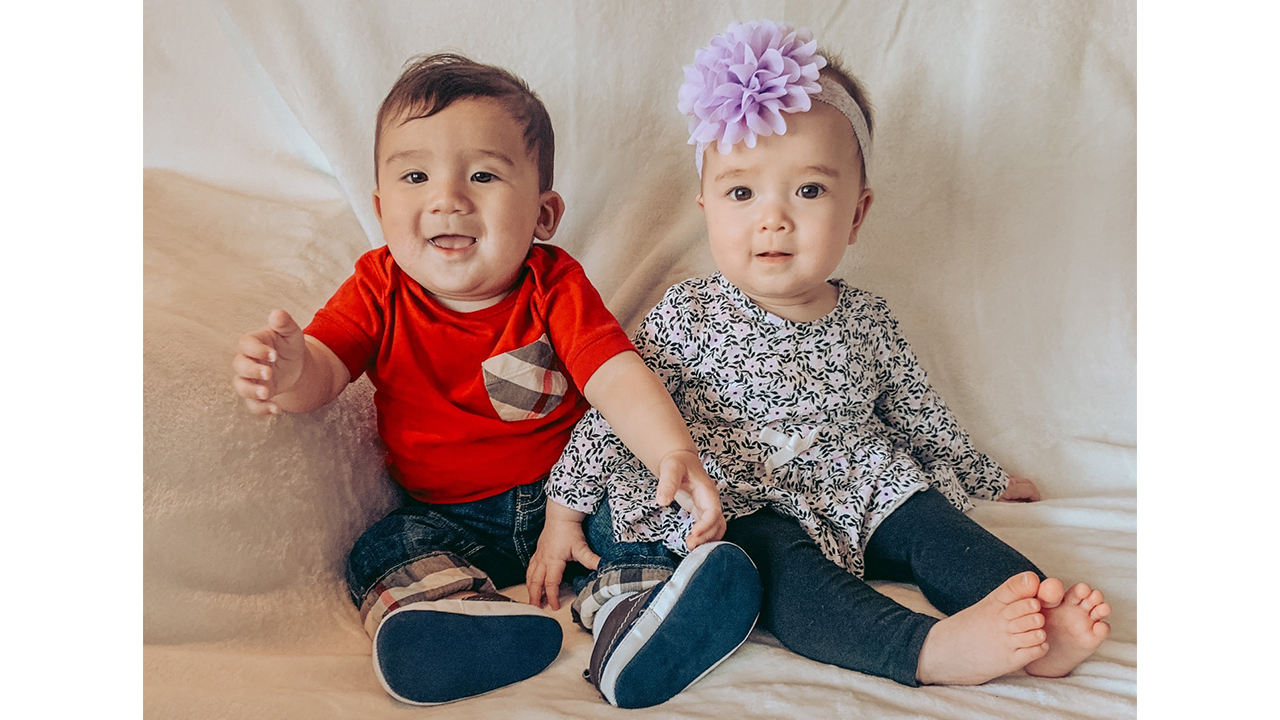 On the babies’ names and personalities:

Cara: I grew up playing hockey and Easton is a popular hockey brand so we named him after that. Aria is a musical term that we liked.

Natasha: Aria is exactly like her mother. She is loud and hyper. Whereas Easton is quite a boy in a house full of loud women.

Cara: I think the best advice we got was to make our elder daughter Alyssa feel special about everything. With the arrival of new babies in the house, our focus was to make sure she didn’t feel left out. 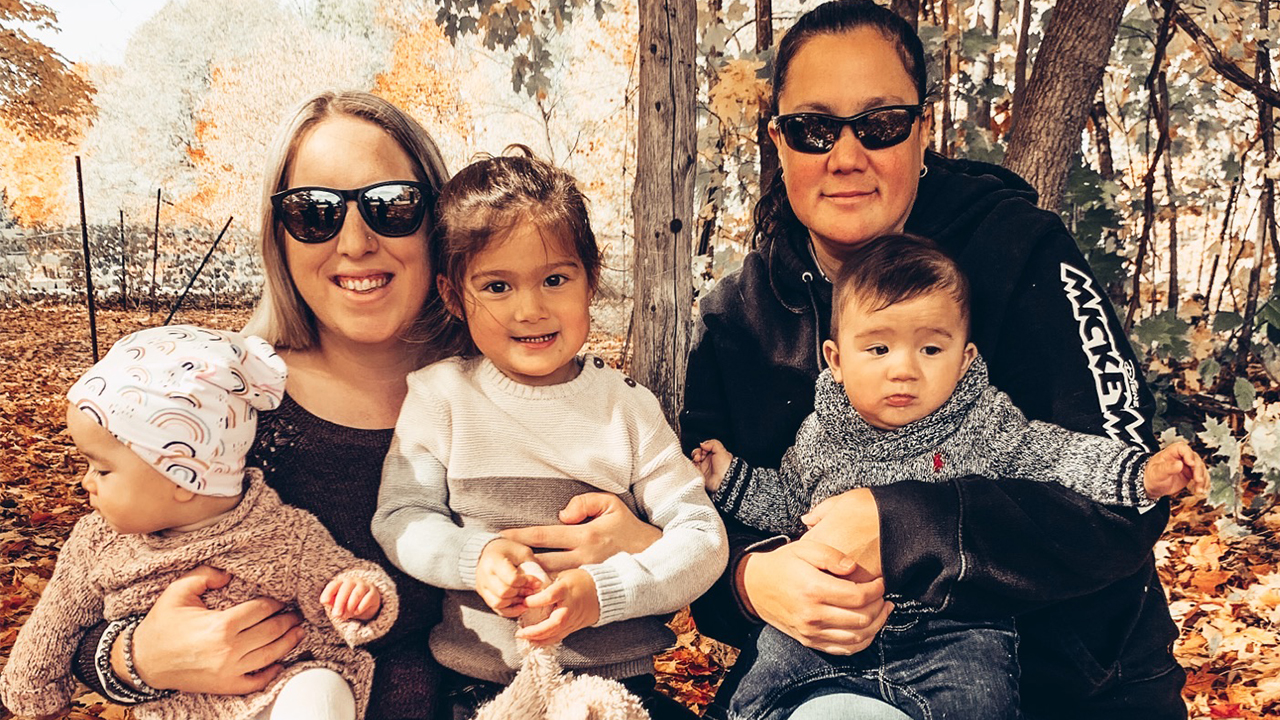 On people’s reactions and questions:

Natasha: When we first broke the news to Alyssa, she was too young to comprehend it. But when she saw our bellies in the subsequent months, she starting assuming that every woman is pregnant because her moms were both pregnant.

Now when we take our kids out for a stroll, we often get questions like, “Are they twins?” When we say no, people assume that we are either friends or neighbours.

Cara: Depending on our mood, we open up about our story when we encounter such questions. Otherwise we say, “Yes, they’re twins,” and move on.

Natasha: We’ve been asked if we both nurse both babies. We could, but we didn’t feel any desire to.

Cara: I had a hard time breastfeeding. It wouldn’t have made any sense for me to breastfeed both.

Natasha: We’re very open and proud of our story. I think there are a lot of stigmas around same-sex parenting and IVF in general. One way to eliminate those stigmas is to just go out there and talk about it.

Natasha: We’re often asked why we didn’t just adopt. We’re pro-adoption for sure, but we wanted to have the feeling of carrying a child. I think people assume that adoption is really easy, but it’s a tough road as well.

Cara: As long as people’s questions are coming from genuine curiosity, we don’t get offended. We’re very open that way.