Measha Brueggergosman, Canada's sassiest opera star has it all: a powerful voice, serious charisma and a body that just won't quit (doing yoga, that is) 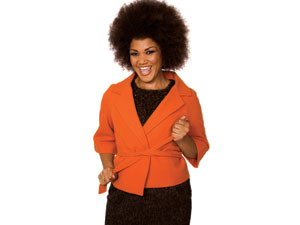 We pile into the silver Mini Cooper. Measha Brueggergosman is in the driver’s seat, fingers drumming, aviator sunglasses slipping down her face. Markus, her husband and personal manager, sits next to her and checks for phone messages. I’m in the back but the car’s tiny size encourages intimacy. We pull onto a busy street and Measha talks about her new house – that is, when she’s not talking to everyone on the road.

“You’re a hazard!” she yells, in reference to a bicyclist who’s swerved into our lane. She adjusts her sunglasses and continues describing her place in Parkdale, on Toronto’s western edge. “It’s a wonderful mixture of sketch and hip. I love it,” she says. “I’m away a lot, but I know when I get home that I have a nice haven. Mostly, I know this because there’s a big antique sign when I come in the door that says Home. It helps keep me informed.”

Measha accelerates around a streetcar stalled in the middle of an intersection. “Oh, I thought you were turning, but you’re not!” she growls. “At least you’re not a biker!” Then she laughs and speeds away.

Minor bouts of road rage aside, Measha comes off as a remarkably well-adjusted woman. Only 30 and already Canada’s best-known opera singer, she’s relentlessly positive, quick to laugh, quick to make fun of herself. She’s also a woman who knows what she wants, and today, she wants Thai food.

Throughout our dinner, Measha speaks with confidence and candour. Words pour out of her as she munches on a mango salad and spring rolls; at times, eager to launch into a new thought, she’ll talk with her mouth full, though she modestly throws a hand up to cover it. But when the conversation turns to her significant weight loss, she picks her words carefully. The change in her appearance is obvious. Several months ago, The Globe and Mail reported that she had shed 150 pounds, though she’s no longer interested in discussing numbers. “I never went through a period of self-loathing. Being fat didn’t make me a failure,” she says. “So to make a big deal out of looking a different way is, I think, to the detriment of what I was before.”

Diabetes, heart disease and cancer run in her family, and Measha cites this history as her motivation to become healthy. She tried the Atkins diet, to no avail. She endured two Master Cleanses, subsisting for 10 days, then 14, on water flavoured with cayenne pepper, lemon juice and honey. “I turned into this raging, bitchy person,” she recalls, “because I was forced to confront my relationship with food.

“Control is so much a part of my life,” she continues. “I knew there was no reason I should be that fat.” Measha needed to find a routine that was more sustainable. Then in, of all places, Ann Arbor, Michigan, she stumbled into a yoga class. “I was like, ‘Yoga? What is this yoga?’ And it was horrible. It was butt-kickingly hard. I saw my life flash before my eyes, and I said I’d never go back.”

Two years ago, she tried again. Now she’s hooked on Bikram yoga, an intense, sweaty workout of 26 poses performed in a heated room. She has completed two 30-day challenges (90 minutes of yoga every day) and two double 30-day challenges (all that yoga, twice a day). “It doesn’t require that I muster up my own self-discipline, which is great. With Bikram, my only responsibility is to show up.” Whenever she travels, Measha seeks out a centre. “There’s one in every major city in the world. It’s like church.” She credits yoga for her dramatic physical transformation.

“It’s good, but it’s also confusing. It’s taken a while for my mind to catch up with my body.” She considers this for a moment. “Like the clothes I’m wearing for this Chatelaine shoot are still never, ever clothes I would choose for myself. There’s no way I would look at a rack and conceive of them on me.”

Yoga has also improved her relationship with food. “I’m eating in proportion to how much I’m exercising, which is a lot, so I have no shame.” She reaches across the table, pops a spring roll in her mouth and winks.

From an early age, Measha was surrounded by classical music. She heard it in church and in her Fredericton home; her father worked for the CBC, and the family often listened to the radio station’s classical programming. In fact, there was no secular music allowed in her household – but Measha found ways around the rules. “I checked out a cassette of Bruce Springsteen’s Born in the USA from the library, and right before I came home I switched it with an adult-contemporary tape. I hid Bruce under the front porch and picked him up on the way to school the next morning.”

As the town singer, Measha worked the local weddings, funerals and bar mitzvahs. Then, at her parents’ urging, she left to study music at the University of Toronto. “I would have stayed in Fredericton forever,” she insists. “I knew where everything was and what was expected of me. Coming to Toronto was rough.”

Fredericton was also the place where Measha Gosman met her future husband, Markus Bruegger. They were both in high school at the time, and “he was the hot Swiss exchange student,” she recalls with a laugh. When they married in 1999, she suggested they merge their last names, so each could have a part of the other’s family. They spent some time debating the order: Brueggergosman, Gosmanbruegger, back and forth. “Now, I couldn’t see any other way. Gosmanbruegger is way too clunky. Of course, Brueggergosman just rolls off the tongue,” she deadpans.

Five years after her wedding day – and six years after her first professional break, playing the title role in the opera Beatrice Chancy – Measha put on her wedding dress for a second time. When she married, she swore she’d wear it to her Carnegie Hall recital debut. On a December evening in 2004, she wrapped a gold shawl around her off-white gown, stepped onto the New York stage and made good on her vow.

Before Carnegie Hall, there was a recital at the Kennedy Center and an audience with the Queen; then came a performance before 65,000 in New York’s Central Park. Now she’ll tour Europe and North America to promote her new album, Surprise, a collection of mostly cabaret songs slated for international release in early 2008. This is her debut with Deutsche Grammophon, which Measha calls the “Holy Grail of classical music labels.”

But while she’s extremely competitive in her work, her greatest accomplishments have nothing to do with music. She lists them off: “That my parents are proud of me, that I have a good marriage, that my brother and sister and I are close,” she says. Measha’s also proud of the charities she works with. They give her what she needs “to feel like a generous member of society.”

One of those charities is AMREF Canada (African Medical & Research Foundation), and last June, Measha travelled to Uganda and Kenya as a goodwill ambassador. She spent time in slums and resettlement camps, performing dances and songs with the kids there. “These children are familiar with atrocity,” she says. “I’d be curled up in a ball in the darkest corner of the darkest basement, but they’re terribly brave.”

Measha doesn’t want to be just a name on a charity’s letterhead; she wants to be in the trenches, effecting change. She isn’t prepared to let anyone else call the shots. It’s her life: She’s going to own it.

Late in the evening at the Thai restaurant, Measha is wrapping up. She has a Bikram class to get to, but she’s allowed the conversation to run a little long; her husband’s gone home to grab her yoga clothes.

Markus drives up and parks outside, coming into the restaurant to collect her. Instead of getting back behind the wheel – after all, he was there just a minute ago – he tosses Measha the keys. I watch through the window as she lowers herself into the driver’s side, adjusts the seat and pulls away, mistress of her domain.