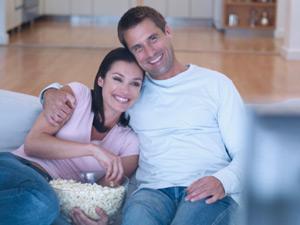 It’s not easy to invest in a new series, given our existing commitments to Grey’s Anatomy, Desperate Housewives and CSI. We’ve sorted this season’s relationship material from the one-night stands and have pinned our hopes on these four promising new contenders.

Starring: Shenae Grimes and Lori Loughlin
Premise: In this remake of the 1990s hit, two fresh-faced siblings from Kansas cope with cliques and crises at West Beverly Hills High.
Why hopes are high: We’re mad about the cast: Aside from the show’s Canadian star (Grimes), Beverly Hills, 90210 alums Shannen Doherty and Jennie Garth will also be wandering the halls. Plus, we’re suckers for teen dramarama from any zip code.

Starring: An entourage of Anna Wintour wannabes
Premise: In this reality-TV version of The Devil Wears Prada, 11 contestants compete for an editorial gig at Elle magazine.
Why hopes are high: Producer Tyra Banks already knows how to create fierce competition.

KATH AND KIM (Thursdays on Global)

Starring: Selma Blair and Molly Shannon
Premise: In this U.S. version of the Aussie hit, a brazen middle-aged mother and her equally brassy daughter try cohabiting again.
Why hopes are high: Two reasons: The Office and Ugly Betty, both hilarious remakes of foreign hits.

FRINGE (Tuesdays on A Channel)

Starring: Joshua Jackson and Kurt Acevedo
Premise: This show follows the activities of the Fringe, a government division that investigates paranormal events.
Why hopes are high: Co-creator J.J. Abrams has already wowed us twice, with Lost and Alias.

THE LISTENER (Sundays on CTV)

Starring: Craig Olejnik, Ennis Esmer and Mylene Dinh-Robic
Premise: A twenty-something telepathic paramedic keeps his mind reading under wraps while attempting to heal the broken lives of his patients.
Why hopes are high: This Canadian-made drama targets fans of Medium, Supernatural, Ghost Whisperer and other shows about unexplainable phenomena. Easier to explain is the appeal of the series’ handsome young Halifax-born star, Craig Olejnik.

MY OWN WORST ENEMY (Mondays on NBC)

Starring: Christian Slater, Alfre Woodard and Saffron Burrows
Premise: Middle-class efficiency expert Henry Spivey would be a typical suburbanite if not for the fact that his body also houses the personality of a Bond-like super-spy named Edward Albright.
Why hopes are high: Christian Slater has had his share of tabloid troubles but we’ll always root for the Heathers hero – this show’s black comedy is bound to bring out his devious charm.