Musician Sabrina Whyatt on being a singing fisherman

What do you get when you cross a country singer with a crab fisher? Sabrina Whyatt, the ultimate Renaissance woman. 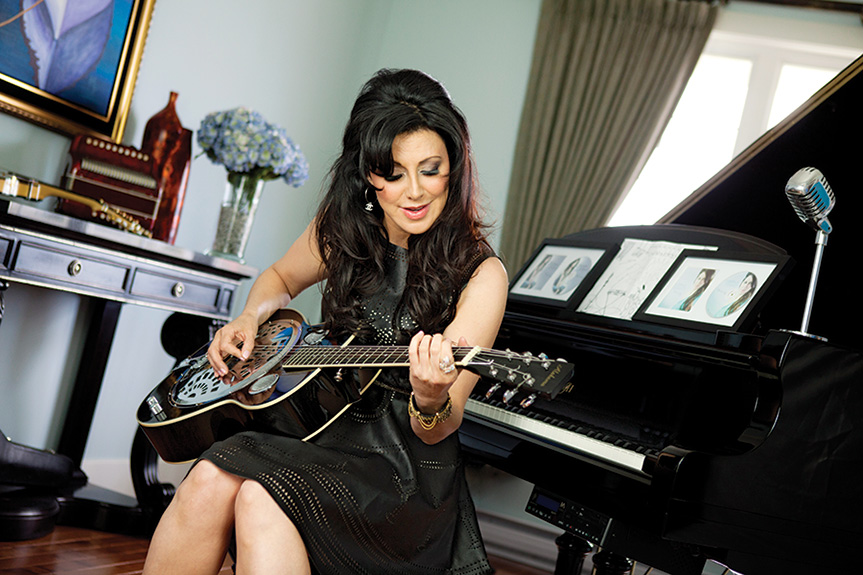 When you listen to Sabrina Whyatt’s latest album, Home in a Song, you can easily imagine the country rock singer strutting her stuff in Nashville, but that’s actually not where you’ll find the bubbly brunette. During crab season, Sabrina works as a deckhand on her 65-foot fishing boat 150 miles off the coast of northern Newfoundland.

“I was the least likely of any woman in Newfoundland to become a fisherman,” she says. So how does a gal who takes style cues from the runways wind up in wet-weather gear, hauling steel crab pots from the chilly North Atlantic?

“I did it purely to make some money — back then, crab was like gold — but then I fell in love with it,” says Sabrina, whose father and uncles are also fisherfolk. “Out on the water it’s almost spiritual. It’s not lost on me either that I’m the only woman on the trawler. There was a time when that wasn’t possible.”

When aboard her boat — christened Lady Kenda by a previous owner — Sabrina feels right at home with the crew of veteran fishers, though she’s the only one swabbing the deck sporting a five-carat diamond ring she bought for herself. “My mother has a heart attack about me wearing it,” says Sabrina. “But I don’t feel content unless it’s on; it’s a symbol of how well I’ve done for myself.”

Fishing may not be the most conventional way to support a music career, but it’s just the sort of curious combo TV executives love, which is how she found herself producing and starring in her own docu-series, Sabrina Whyatt: Blazing Trails.

At 40, Sabrina is the ultimate go-getter. Downtime has been devoted to a bucket list that has pushed her to climb Mount Kilimanjaro and most recently write her autobiography, The Woman I Am. She has almost completed everything on the list, “minus the husband and babies,” she jokes. When she does take a day off, it’s to hike Signal Hill overlooking St. John’s or else kick back with Willie Nelson, her pet pig. “He came with a money-back guarantee that he’d be no more than 20 pounds, but he just kept growing and growing. Now he’s pushing 150 pounds!” says Sabrina.

Despite her barnyard bestie, Sabrina’s home is elegant. Her busy life converges in her glam living room, home to her Kawai grand piano and nautical-themed oil paintings. One, of a wave, reminds her of how her paternal grandfather was drowned but managed to save the life of her maternal grandfather in the process. “My grandfathers were fishermen together, and they were both swept out to sea while hauling their boats up in a gulch during a storm. My maternal grandfather is now 96, and a few years ago he told me the story of how my other pap saved his life. It made me even more proud to call myself a fisherman.” Also on display is the accordion her father played as a boy. Sabrina credits him for her love of music. “When I was little, we didn’t have a TV, so my dad and I were always singing,” she says.

To show her gratitude and perhaps round out his resume so she’s not the only singing fisher in the family, Sabrina recently surprised her father with special birthday gift: “I booked him studio time, so he can record his own album!”

My proudest moment was… the day I found out I’d passed the Transport Canada exam and received my Fishing Master, Fourth Class [Captain’s Ticket].

I define downtime as… chillin’ out on the swing in my backyard with my guitar, writing music and watching Willie play in the grass.

I wish I had more time for… visiting my family. I have family in St. Carol’s [northern Newfoundland] and in Edmonton. I wish we could all be together more often.

I wish I was better at… swimming. I never learned!

My favourite moment of the day is… early in the morning, especially when I’m hiking around the cliffs of Signal Hill, and there’s no one else on the trail. It’s very peaceful and I sit on the rocks and meditate a little and say prayers of gratitude. I’m corny like that.