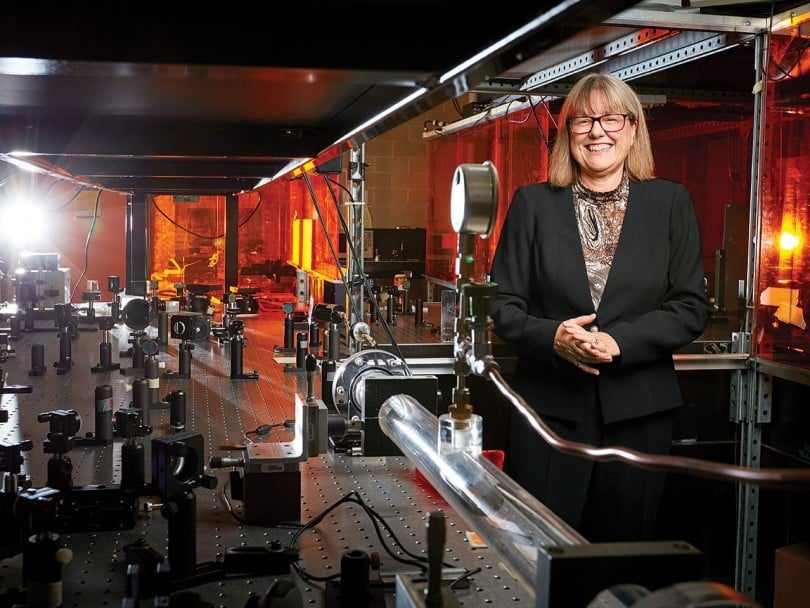 Of the thousands of emails and phone messages that University of Waterloo professor Donna Strickland received the day after she won the Nobel Prize in Physics — including a personal call from the Prime Minister — one email held particular and historical significance: a congratulatory message from the only grandchild of the late German-born American physicist Maria Goeppert Mayer. “It’s very precious,” says Strickland. And no wonder: Goeppert Mayer was someone Strickland had cited in her doctoral thesis, which served as the foundation for the research that was recognized for the Nobel Prize. She was also the last woman to be awarded the prize — 55 years ago.

Strickland was born just four years before that auspicious win, in Guelph, Ont. Her father was an electrical engineer at General Electric, and her mother was an English teacher at Guelph Collegiate Vocational Institute — the high school Strickland attended. In grade 11 she won an award for the top physics mark. Science and math were easy for her, but taking to the stage to accept the prize was another story. “I was a shy kid,” says Strickland, “so when I went to get the prize, I thought, ‘Oh God, they’re going to have this huge neon sign above my head that says “Super Nerd.” Yet, right after that, the kids in my class were saying, ‘Wow, congratulations! It must be great to be so smart.’ I just thought, ‘Donna, get a grip. People aren’t thinking bad things. Most people are thinking good things.’ It was a life lesson for me.”

Strickland is still a bit shy now, but she is also witty, droll and charmingly self-deprecating. She jokes that back when she was growing up, she didn’t have any ambition, other than “to stay in school.” She studied engineering physics at McMaster University, where she first developed a fascination with lasers (“They are just so cool,” she says), and she eventually obtained her PhD in optics at the University of Rochester. She worked with physicist Gérard Mourou and, in 1985, the two developed their Nobel Prize–winning technique, Chirped Pulse Amplification (Mourou shares the prize with Strickland). The technique made possible the small, powerful lasers that are now used in corrective eye surgery, medical imaging and glass cutting. In 1997, she was hired by the University of Waterloo, where she runs the Ultrafast Laser Group (and basically develops lasers we’ve never seen before).

Strickland sees the many barriers women face in the hard sciences and is candid about her own good fortune: Her career has been more or less free of discrimination. When asked if she thinks her Nobel Prize will make things easier for other female scientists, she’s optimistic. “I’m a person who prefers to think of the positive, not the negative,” she says. “I want to celebrate that things are changing.”