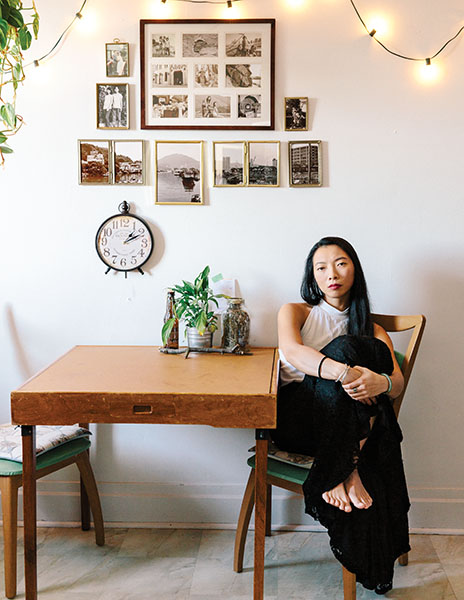 Growing up in Vancouver, Claudia Li was drawn to the dim sum her family ate. Other kids, less enamoured of tripe and chicken feet, pounced on her love of “weird” foods. “I told my grandmother I was being picked on, and she got very serious,” says Li. “She said when we sacrifice an animal for food, we use every part of it. She planted the idea that we shouldn’t waste anything.” The idea stuck. Now 29, Li is the co-founder of two organizations working to preserve Chinese culture — its foods, traditions and pastimes — while advocating for sustainability.

Rituals have always had a strong presence in Li’s life. Her mother’s family — five siblings in all — emigrated from a Hong Kong fishing village 30 years ago and set up a communal existence, with children shuttling between households. Li elected to study business administration at Simon Fraser University. “My mom had a stereotypical expectation that I would become a lawyer, doctor or financier — or at least marry one,” she says.

But Li developed a different passion after watching the 2006 documentary Sharkwater, which details the brutal trade in shark fins and explores how China became its largest market; the fins are often served in soups at wedding banquets. “It was the first time I saw that something I did had a negative impact on the planet,” Li says. So in 2009, she founded Shark Truth to encourage Asian couples to reconsider shark-fin soup. Among other campaigns, she set up a contest with cash prizes and honeymoon trips for those willing to commit to “fin-free weddings.” By its count, Shark Truth has saved almost 8,000 sharks.

Li’s second organization, the Hua Foundation, promotes culinary traditions and encourages socially conscious work. One popular campaign uses workshops, guides and cooking demonstrations from Chinese grandmothers to boost the growing and consumption of local Chinese vegetables like daikon, pea shoots and choy sum. Food played a critical role in Li’s multi-generational upbringing. “There weren’t a lot of verbal expressions of [emotion], but as soon as you walked through a door, someone would ask if you had eaten,” says Li. “We wouldn’t say ‘I love you,’ but we’d make sure someone was fed.”

Last year, Li helped set up the Youth Collaborative for Chinatown, which offers historical walks and a recurring “Hot and Noisy Chinatown Mahjong Social,” all in the hopes of preserving the rapidly gentrifying area in the face of massive condominium development. She’s now “poking the coals” of a new idea involving oral history. “Every time I start a campaign, it’s because I’m trying to stop a part of my culture or family from slipping away,” she says. “We live the stories we tell about ourselves. They’re the threads that connect us to each other.”