“We don’t want our sons to become the perpetrators”

Michèle Audette is president of the Native Women’s Association of Canada, based in Montreal. The organization works at a policy level to combat physical and sexual violence against Aboriginal women and girls, identifying gaps in essential services and commissioning research on the issue. 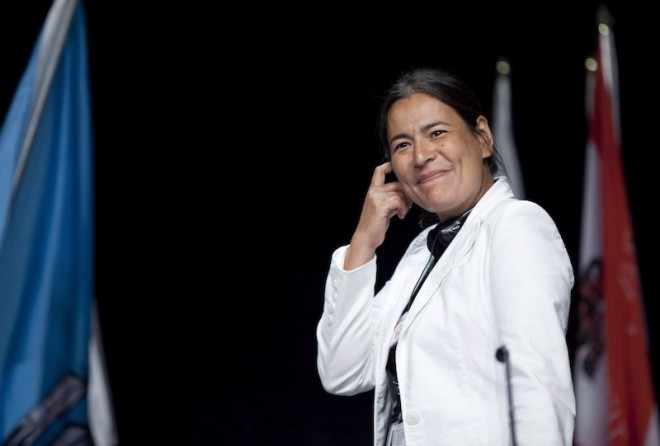 “Our most tragic issue and our top priority is missing and murdered Aboriginal women. We first denounced sexual abuse and sexual assault back in 1989. In those days, we didn’t have support from the male leadership of the Aboriginal community, from our own people. It was taboo.

Slowly, we got support. After 20-something years, with all the campaigning and events, we thought things were improving. But, no, it’s still a huge issue. It’s almost normalized in the culture. Women think, ‘Even if I speak about what happened to me, nothing will really be done because there are no programs or services to support me and my family in my own community.’

This issue is personal for me. One of my best friends, just last week, got a call on her cell phone while I was with her. She bolted from the room. I asked her what was going on. It was her daughter’s school on the phone. Her daughter had been raped. Her 12-year-old daughter. It happened after school at a friend’s house with other friends present. As soon as they found out, her family took her to the ER, and social services got involved, of course. But this incident happened a month ago. It took her a month to tell her mum. She was so ashamed, afraid, scared. And she doesn’t want to lose the friendship of the people surrounding this boy. I would like to think that for young Aboriginal girls in Montreal in 2014—because of school campaigns, or TV or the women’s movement—that we would have reached those young girls. That they would know these things are not acceptable, that sexual assault is a crime and you’re entitled to get support and help.

The work we do at NWAC can be overwhelming. The territory we serve is huge; the country is huge; the demand is huge.  It’s easy to get burnt out. Change has to start at home. Here’s our goal: We don’t want our sons to become the perpetrators or the abusers—the ones who will rape or beat. We need to educate them about that at home and with sexual health education in schools.

Yes, we have to say to girls and women, ‘Rape is unacceptable, and you have to denounce it.’ But we also have to speak to the people who do these things, or are at risk of doing them. We can get them help before anything happens.

I have heard stories from men who were previously violent with women. Today, they’re undergoing a process of healing and reconciliation with their past. What they say is, ‘We never had that prevention when we were young.’ It was just so normal for them to see dad beating mum, brothers beating their girlfriends, and so on. They continued the cycle. And now that there’s a movement to stop violence against women, some of those men—not all of them—are able to speak to other men from experience and say, ‘Do not go that way. You will break a life forever, or many lives.’”

—As told to Genna Buck. This interview has been edited and condensed.