The Heritage Minister talks about the country's sesquicentennial, changing the political system from inside and dealing with pressure on the job. 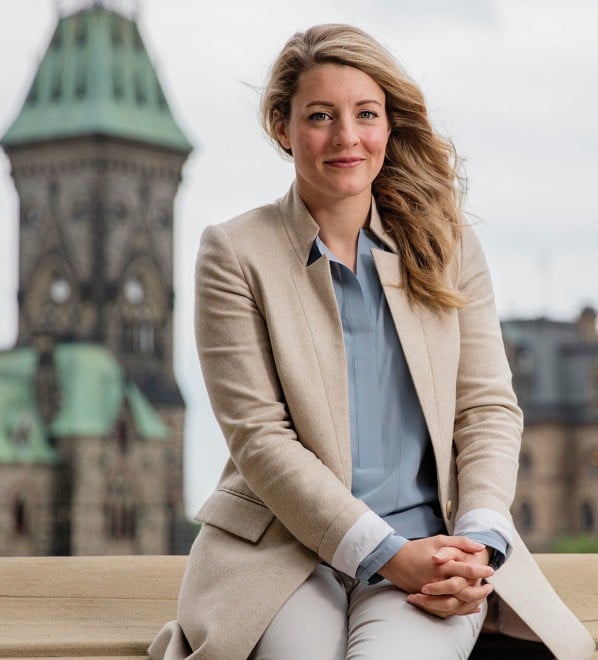 2017 is going to be a very big year for Mélanie Joly — and Canada. The 37-year-old lawyer and public relations rep manages one of the most ambitious and, to her mind, one of the “coolest” portfolios in the Liberal government, which includes the high-pressure task of marking the country’s 150th anniversary. The sesquicentennial, a year-long, cross-country celebration that kicks off in Ottawa this month, comes at a moment when Canadians are questioning our culture more urgently than ever. What stories have been left out of the history books? What’s the point of CanCon in the age of Netflix? What fresh havoc will President Trump wreak north of the border? Joly spoke with Chatelaine about these and other questions of heritage on her way from her Ottawa office to her home in Montreal, where she once ran for mayor (and may or may not do so again).

What’s it like to throw a $210-million birthday party for the country?

We’ll be having a great party, but overall I’m hoping the legacy of Canada 150 will be an emotional one. There will be hundreds of community projects around the country, and micro-grants that can be used to help a women’s shelter, have a block party or green a part of a given city.

What’s the goal of these initiatives?

To celebrate the reconciliation with indigenous people, to get youth involved, to champion the environment and diversity and inclusion and to make sure  that people get to know each other. Hopefully, by the end of Canada 150, we’ll have increased the numbers of volunteers and increased the social cohesion within our society.

2016 was a tough year for a lot of reasons, and the 150 celebrations will set the tone for a brighter 2017. But they’re also kicking off in the same month as Donald Trump’s inauguration. Canadians are feeling a lot of anxiety about his presidency and the effect it may have on our culture. How do you address that anxiety as heritage minister?

All Canadians have a lot to look forward to in 2017. We’re displaying great international leadership, and we’ve just wrapped up consultations on Canadian content in a digital world. I’m also working on developing Canada’s first-ever cultural export strategy to promote our storytellers, musicians, authors and movie makers and to harness their potential.

Confederation is a very white, male story. Obviously, the history of Canada stretches way beyond that. How does that tension factor into the plans for 150?

We want to make sure that when we’re talking about the past 150 years, we include the perceptions of women and of people who didn’t have strong voices in the past 150 years, including immigrants and more vulnerable people and certainly, also, indigenous people.

Can you give me an example of how you’ll do that?

The first that comes to mind is Indspire, a speaking tour across Canada that will showcase positive leadership, including indigenous women. We want to give these women a platform to speak about their reality and inspire others.
We’ve done a terrible job of teaching generations of kids about indigenous culture. How can we do better?

I have in my mandate letter [the directive] to develop the first policy to support indigenous languages and culture in the history of our country. So I want to make sure, along with indigenous people, that they have access to their own mother tongue, and that they can celebrate the uniqueness of their own cultures. Empowering them empowers every single Canadian in this country.

The country has always lived in the shadow of the U.S. when it comes to cultural output. How do we shake that?

People hear about Canada but sometimes don’t know they’re hearing about Canada. We’re the third-biggest exporter of musical talent in the world, we’re the third-biggest video games producer in the world, we produced $7 billion worth of film and television last year—and $3 billion of that was exported. We’re number one in virtual reality — we were the creators of IMAX, and we’re one of the first countries to send a satellite into space. These examples are just not necessarily known as Canadian.

Whenever people mention your name, it’s usually in the same breath as “She’s so ambitious.” How does that scan to you?

I’m very proud to be ambitious. I’m ambitious for my community and for the people I work with. I want to make sure every single person on my team is able to realize his or her own ambition. I don’t see it as a competition with other people. It’s a competition with yourself.

How do you handle the pressure?

I’ve gone through some issues with anxiety since I was a baby. Performance anxiety has always been the reality of my life. I make sure I take time for me, and that I get to rest and get in a run.

Related: I’m sucking it up and running this winter — here’s how you can too

A lot of women are their own worst critics. Is that true for you?

Yes. You have to have good psychological resilience, and you have to be able to deal with criticism and know why you do things. That’s why it’s so important to be humble. Because if you’re only ego-driven, this is an extremely tough business. It can be extremely damaging to your emotional health.

You ran for mayor of Montreal in 2013. Any plans to make another run?

[Laughs] I am very happy to be heritage minister.

More women are taking on political leadership roles, but a lot of us were still pretty crushed when Hillary Clinton lost out on  the presidency. What would you say to Canadian girls about the challenges and rewards of running for office, whether for the mayoralty or as an MP?

Change the system from the inside. Even if you fail, you have to take that step of getting involved in our community. Find an issue you’re passionate about and fight for it. Be yourself and be ambitious. You have to go for it.

It sounds like Canada 150 is all about bringing people together. How do you make sure that message of unity stays on track when Trump’s divisive rhetoric has already gained traction in certain pockets here?

Canadians created a movement — an example for the world — by welcoming Syrian refugees in communities across the country. We are open and welcoming. We truly embrace diversity.

More:
Reached our breaking point: What we can do to make bars safer for women
What it feels like to be panicked all the time
Three babies, three doorsteps: Cracking a 40-year-old mystery