The Megyn Kelly Conundrum: Is It Ever Okay To Ask About Someone's Plastic Surgery?

Even if Jane Fonda has come out pro–cosmetic enhancements in the past, you should probably consult this guide. 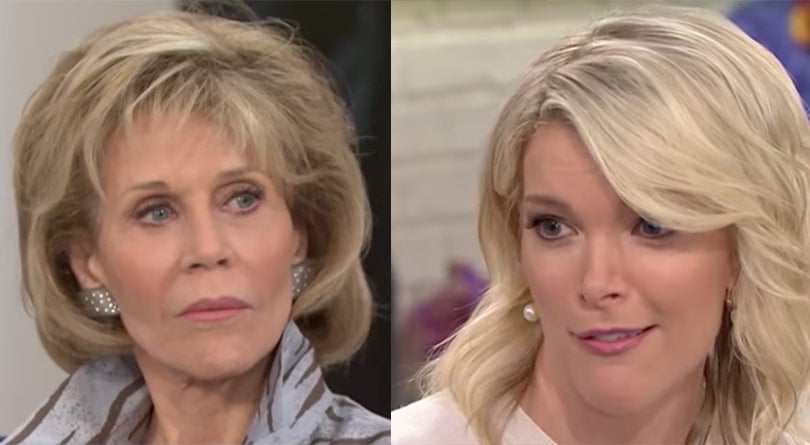 Jane Fonda appeared on Megyn Kelly TODAY and was asked about the cosmetic work she's had done in the past. Photo courtesy NBC.

At 79, Jane Fonda still gives good face. She’s also made no secret of why her face is quite so ageless and, well, taut: plastic surgery. And while Fonda’s been candid about her many trips under the knife in interviews past, things got palpably awkward this week when, out of left field, Megyn Kelly brought up the actress’s surgical history during a sit-down on Kelly’s talk show, Megyn Kelly TODAY.

During an appearance alongside Robert Redford, intended to promote their new movie, Our Souls at Night, Kelly turned to Fonda and pondered, “I read that you said you felt not proud to admit that you’ve had work done. Why not?” With the aid of a frigid-cold death stare, Fonda communicated to Kelly that it was the “wrong time and place” to ask about Fonda’s gravity-defying appearance.

Still, it begs the question: If Fonda has publicly disclosed her proclivity for plastic in the past, wasn’t Kelly within her rights to ask? And what about in real life: When it comes to your actual friends or your mom or your suddenly frozen-faced boss, is it ever okay to ask whether someone’s had work done? As a favour to Kelly — and the nosy among us — we’ve compiled a number of imaginary scenarios and asked ourselves, is it okay or not okay to ask about cosmetic enhancements?(Hint: It’s mostly not ok.)

The situation: Your typically expressive mother-in-law is dishing out more blank stares than usual. You suspect Botox.
Do you mention it: Literally never.
Why: If the mother-in-law and daughter-in-law relationship weren’t loaded enough, pointing out a bit of forehead work over Thanksgiving dinner might spoil things forever. Ask if she got her eyebrows done instead.

The situation: After her last kid, your best friend has opted to get the boobs of her dreams. They’re Fs — and you know from Grade 10 gym class that she maxes out at a solid B.
Do you mention it: Yes.
Why: What kind of best friend doesn’t immediately compliment her BFF’s new dream rack? Take her lingerie shopping. Have mimosas! Celebrate living!

The situation: The younger guy you’ve been seeing after your divorce disappeared for four weeks, then returned with a magically more-defined chin.
Do you mention it: No.
Why: You might want to sleep with this new-and-chiselled model at least one more time.

The situation: Your daughter’s first-grade teacher has taken a one-way trip to Fillerville. Thrice.
Do you mention it: No. Okay, maybe?
Why: Are you okay with your daughter learning about emotions like joy and disappointment from someone who can’t quite smile or grimace? Check the curriculum, then decide.

The situation: You are interviewing a youthful, Academy Award–winning thespian and living legend who has admitted to plastic surgery in the past.
Do you mention it: No, no, no.
Why: Ask Megyn Kelly.