Fashionable footwear is no longer about the height of the heel, it’s about the fabulousness of the stockings, thanks to Ryley O’Byrne. 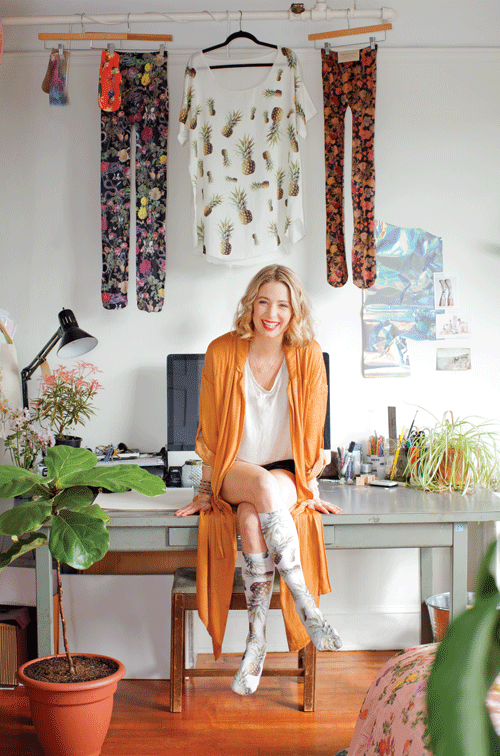 It’s rare for socks to set the fashion world on fire, yet designer Ryley O’Byrne’s stockings have caught the attention of everyone from Vogue Italia to W magazine. Richly patterned with lush, exotic prints — pineapples on bubble gum pink, starbursts and tropical birds  — they are dazzling. “I can come up with some pretty weird ideas. I’m often surprised when the weirder my idea, the more people think it’s cool.”

It’s been three years since Ryley left her high-profile job as Aritzia’s creative director of marketing and launched Strathcona Stockings. “On paper, it was a dream job, but I wanted to get out of corporate fashion,” says Ryley.

She was born in Vancouver to arty entrepreneurs. Her parents now live on the beautiful Sunshine Coast south of Vancouver, where they run The Gumboot Restaurant and are working on a project building sustainable houses (Ryley lives in one of them). In 2000 Ryley won a scholarship to the University of British Columbia; she studied math but dropped it in favour of fine arts. She’s always followed her gut, and so far her instincts have been bang on. You can find Strathcona Stockings at the hippest boutiques and on stylish feet the world over.

When she told her parents she was quitting her job to launch a sock company, they were unfazed. “You have a vision to do something different? Then absolutely, you should be doing that.” “They’re wildly supportive,” says Ryley. “It’s very wonderful.”

Her prints reflect both her love of nature and her fine arts background. “When you’re an artist, you can’t be anything but your experiences. I work a ton with botanicals, flowers, fruits and vegetables, and clearly some of that is because I grew up with a beautiful garden in a forest with a lot of nature around me. I feel like it can’t help but be a part of what I do.”

She works out of a cozy studio space in a heritage building on East Vancouver’s boho-chic Commercial Drive. Riley wears her socks over tights, or peeking out from between pants and loafers, or above tall boots. Her mother wears them too, and her grandmother has even modelled for one of her lookbooks. “My favourite thing about socks is how egalitarian they are,” she says. “They don’t leave anyone out.”

What’s next for Ryley? Naturally, socks for men, and, hot on their heels, tights for children. “I think they’ll be very funny and very cute, but some parents may not appreciate pot leaves on them!” Chances are, knowing Ryley’s sock savvy, they’ll be an instant hit with the under-fives.

“The exciting part for me now is having total freedom and creative licence to do whatever I like and not to have anybody telling me, ‘Oh, that won’t sell,’ or, ‘I don’t think that looks good.’ If it works, great, and if it doesn’t work, that’s also fine because it’s fun!” 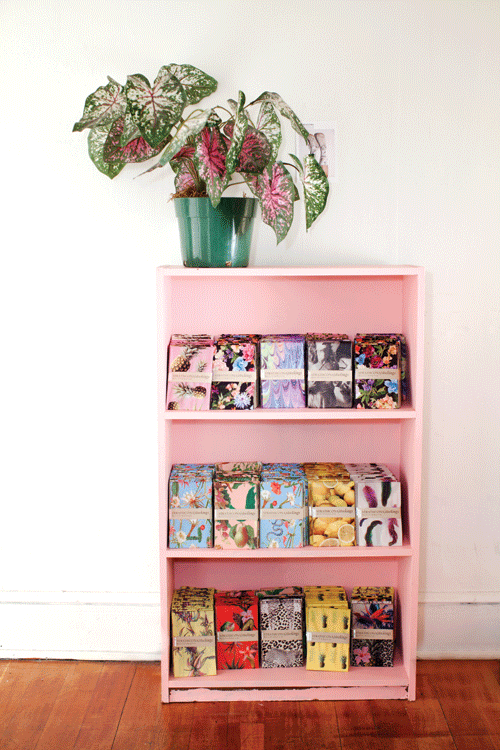 I wish I had more time for… so many things! Writing more. I do fiction and creative non-fiction. And cooking homemade meals. I want to spend more time existing in the summer — I want more summer!

I wish I was better at… speaking French.

I define downtime as… when my mind isn’t rushing.

My favourite moment of the day is… when I wake up naturally, without my alarm going off. And every moment that I don’t have to be on email.

The biggest mistake I ever made was… Every mistake I’ve made helped me get where I am.

I describe my personal style as… fashion fantasy.

I’d love to go on vacation to… Buenos Aires. 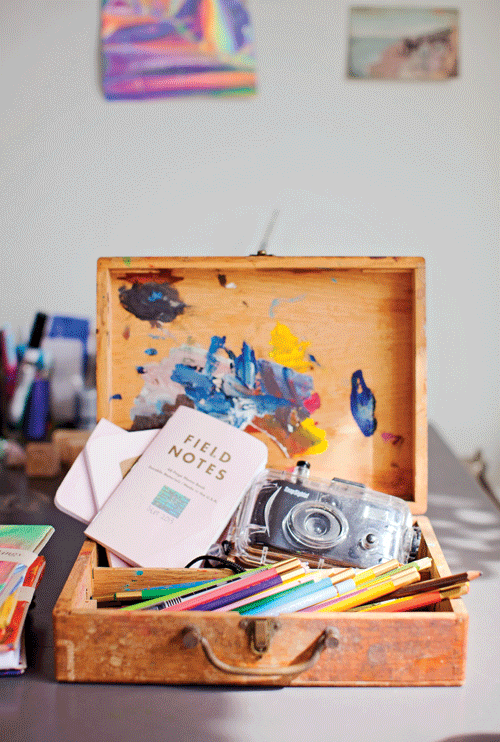 Some of Ryley’s most important design tools are her notepads and pencils (she sketches constantly) and her camera. Photo, Janis Nicolay.

Books: “I don’t like e-readers — I am a print girl through and through — and I’m always reading.”

Reading light: “I stay on a lot of friends’ couches; it’s so annoying whenyou can’t sleep and you’re not going to turn on the lights.”

Black felt pens: “I like a 0.5 fine tip to draw and write with. There’s a Japanese one I particularly like called the Pigma Micron by Sakura.”

My notepad: “Holbein Multi-Purpose Drawing Books are my favourites. I make a lot of my prints from collages, and they have really nice paper.”

Camera: “I take tons of photographs. My Ricoh GR1 is small and solid andgets the job done.”