Meet the new host of CityLine 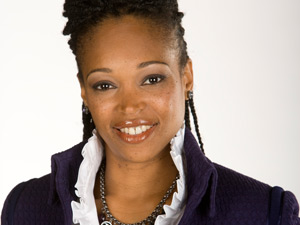 What did you think when they offered you the job?
I let out the biggest sigh of relief ever. A lot of really talented women auditioned for the position. I called my husband and I yelled and I was just so excited and thought ‘What a huge show to be able to host.’

What attracted you about the job?
It actually wasn’t initially my idea. Someone mentioned the opening to me and at the time I was pregnant and after I thought about it I thought, ‘You know these are all the things that are going on in my life right now: Home renovations; cooking – because I now have a child who needs to eat; fashion always has been a huge interest of mine and of course Fashion Friday is the most popular day on CityLine.‘ So I thought, ‘This totally makes sense for where I’m at in my life right now‘ and as I did the show more and more [as a guest host] I began to realize that it really was a perfect fit.

How do you feel about filling the position that Marilyn Denis held for so many years?
I’m honoured to be able to occupy the same space she did. CityLine has always attracted people who are giants in this industry – Dini Petty started, Marilyn continued and I’m really thrilled my name can be up there alongside theirs because I have nothing but respect for both of them.

Do you think it will be a challenge to work in Marilyn’s shadow?
I had to say to myself, ‘There’s only one thing I can do in this situation and it’s to just be Tracy Moore. I can’t be any more or any less. I have to be myself.’ I think our audience is pretty savvy. I think they can sniff out inauthenticity a mile away. There might be a bit of a different flavour because I’m there and of course every personality brings something different to the table but I just need to be as true to myself as I can be.

What do you think you’ll bring to the show to make it your own?
I want to bring the show to more people my age. Women who are starting families and trying to juggle the hubby, the baby and the career. Women who need to know how to whip up a meal really quickly that tastes great. Women who want to look fierce on a budget. All of these things. There are other new things we’d like to introduce as well. A lot of women came up to me after I had my baby and were like “Okay, how do I lose the baby weight, let’s talk about it. How hard is it? What did you have to do?” We want to talk about fitness on CityLine – it’s a huge issue for women around my age. I’m 33. People who are in that stage of life are worried about their health. And finance – with the economy being what it is right now personal finance is a huge, huge deal for women across the country.
I think we want to maintain the very loyal audience we have right now but we also want to capture people who are just starting their families and those people who have just left school and are getting their first jobs. We want to get all those people watching as well.

Is this where you saw yourself when you were younger?
Eight years ago I met my husband while I was an editorial assistant at CBC. He reminded me the other day that when we went out on our first date he asked me what I wanted to do eventually and I said, “I’d like to host my own show.” Certainly CityLine doesn’t belong to me alone, it belongs to the viewers and all the guest hosts that come in as well, but this is what I’ve wanted to do for a long time.