With careful consideration, Joyce Saxton of Plenty, Saskatchewan – “a typical and, at the same time, a most exceptional homemaker” – was selected as the first winner. 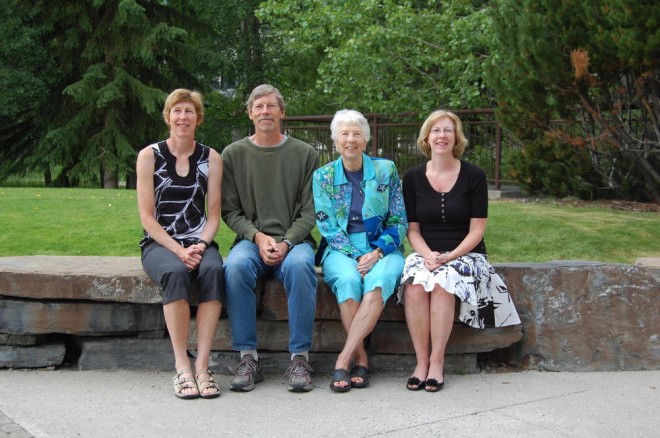 From 2010: Joyce, pictured here on her 80th birthday with (from left) Sherry, Don and Sandy. 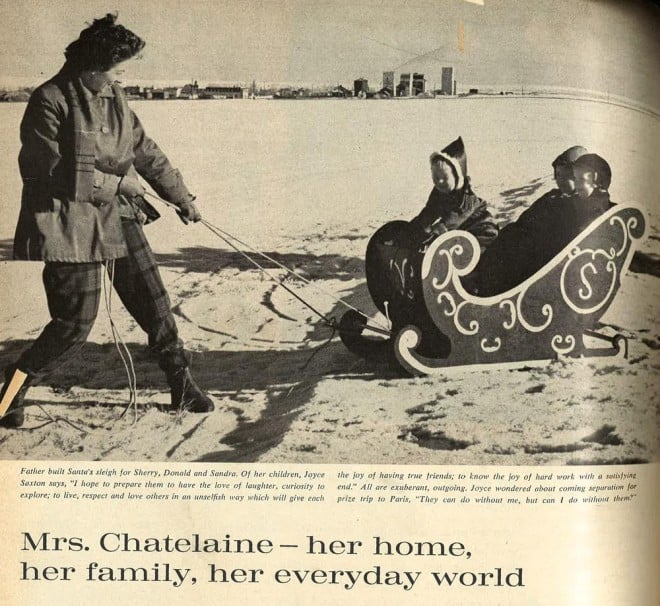 Joyce Saxton pulls her children Sandy, Don and Sherry in a sleigh built by their father, Alex 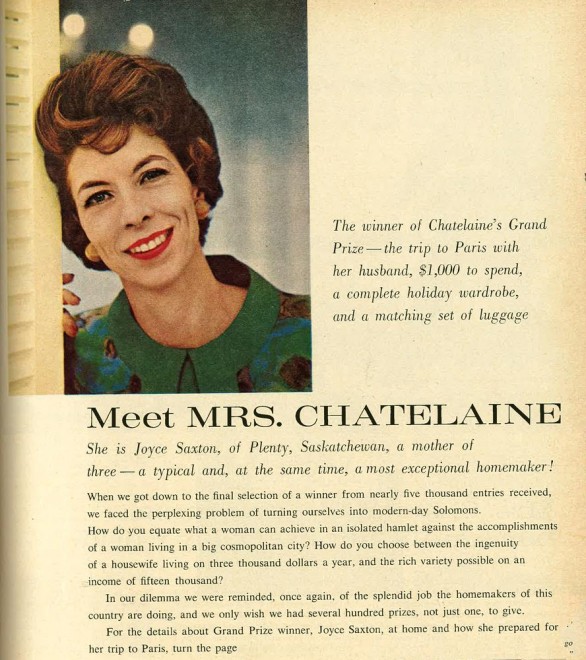 This year marks the 50th anniversary of our Ms. Chatelaine column, which was started as an annual contest in 1961. That year, Chatelaine invited readers to share their homemaking skills and accomplishments in hopes of winning a trip to Paris for two with $1,000 to cover expenses, a new spring wardrobe and three-piece luggage set.

And great news, we’re continuing the tradition with a five-star Paris getaway. Click here to enter. As well, to mark this anniversary, we’re taking a look back at the first Mrs. Chatelaines to grace the pages of the magazine. Boy have times changed….

Chatelaine’s editor Doris Anderson asked readers to participate in an extensive questionnaire. Women were required to list their household chores, how often they entertained and outside hobbies or community projects. They had to include details of a typical family dinner and a special meal for company. A hand-drawn floor plan of the family’s living room, complete with furniture arrangement and colour scheme, was required. In addition to sharing her husband’s occupation and income, each applicant also had to express her philosophy for raising children and for being a good homemaker. “Reading those letters always gave us a lift—and a yearly jolt of reality,” Anderson wrote in her autobiography, Rebel Daughter (Key Porter Books, 1996). “I believe the contest kept us more closely in touch with our readers than anything else we ever did.”


And the first Ms. Chatelaine is…

Nearly 5,000 entries for Ms. Chatelaine were received in December 1960. Anderson and her team were overwhelmed: “How do you choose between the ingenuity of a housewife living on three thousand dollars a year, and the rich variety possible on an income of fifteen thousand?”  With careful consideration, Joyce Saxton of Plenty, Saskatchewan – “a typical and, at the same time, a most exceptional homemaker” – was selected as the first winner. The 30-year-old mother of three – Sandy, six, Don, four and Sherry, two – lived with her husband, Alex, a grain farmer in a rural community 120 miles outside Saskatoon. She came to Plenty as the new schoolteacher from Outlook, in west central Saskatchewan. Saxton quickly adjusted to the small-town feel and enjoyed the close-knit community. At one of Plenty’s social gatherings, she met Alex and they settled down together soon after. Saxton applied to the contest initially to win the trip to Paris, but she told Chatelaine she found a second reward in sitting down to collect her thoughts into a household philosophy. “The time seemed right to really explore what I was doing, where I was going and what I wanted in my life,” Saxton says. “I had three little kids, and it just felt like the perfect moment to sit down and think about how I was raising them and how I was living my life.”

140 quarts of preserves and community service

Saxton’s application stood out for her resourcefulness, community pride and dedication to her family. She managed her household on an annual income of $4,000, sewing all her children’s clothes, packaging and freezing the fruits and vegetables of her outdoor garden to sustain her family through the winter and helping her husband with renovations during the off season. As she told Chatelaine in 1960, the avid gardener and baker preserved 140 quarts of fruits and pickles, 60 jars of jellies and jams and 260 packs of fresh frozen fruits and vegetables, and frequently baked pies by the dozen. Today she has a penchant for birthday cakes and buns. Her ten grandchildren (aged 14 to 28) are more than happy to sample her treats. Outside the household, Saxton was an active member of Plenty. As she told me, “Because it was such a small community, to survive each and every one of us had to put our shoulder to the wheel. Anything that happened had to be 100 percent, or it didn’t go.” Saxton is still a vibrant volunteer in her community. She now lives in Airdrie, Alberta, where she continues to dedicate her time at the food bank and library. She also loves to play Bridge. Looking back on how she managed it all, Saxton says, “I guess you do what you have to do, and you find out that you can do it.” As Anderson recalled: “Meeting Joyce Saxton, you’re impressed with her alert poise, her indefinable sense of security, born of the knowledge of who and what she is – beloved and needed centre of a happy home.”

Not a beauty contest

Saxton wasn’t thrilled when she travelled to Ontario to claim her prize. “I do remember that I was annoyed when I got down to the offices in Toronto,” she says. “I entered the contest with the idea of developing and sharing my own philosophy, but the focus shifted toward a beauty contest. I had words with Doris Anderson, because I thought they were interested in what I thought, not that my hair was perfectly curled.” In her autobiography, Anderson admitted that in order to pay for the first contest, her publisher insisted she turn it into a beauty contest. “I told her that I was unhappy with this nonsense, and she agreed with me,” says Saxton. “But she also said that she was over the barrel with what the people providing the prizes wanted, and concessions had to be made.”  Anderson herself recalled the event in her autobiography 35 years later: “[Joyce Saxton] gave me a piece of her mind about the makeover: ‘I didn’t enter this contest to be turned into a model,’ she told me, and I agreed with her. From then on, we cut out the makeover.” While the first contest did include a style makeover, Joyce’s accomplishments and beautifully articulated philosophy still stood out. After the article was published, her husband ran out and bought three copies to save for the children.

A trip to remember

The trip to Paris was Saxton and her husband’s first time abroad. “Someone said to me that they were humbled by Paris, and I feel like that says it all,” she says. “The history, the majesty of it all, it was overwhelming.” The trip sparked a long-lived love affair of travel in the young couple. Since then, Saxton, now 81 years old, has travelled across Europe, Australia, New Zealand, Mexico, Guatemala, Greece, Israel and parts of South America and northern Africa.

“Women today are not what I was 50 years ago,” says Saxton. “Life has changed so much since I entered the contest. I think the winner today should still take the time that we did back them to think about what they want of themselves and to go for it in whatever way they can. The process is as important now as it was then.”

Now through October 31st you can share your story in a search for our anniversary Ms. Chatelaine. The entries we have received so far are awe-inspiring, and we look forward to receiving many more throughout this month and the next.