It’s been a good week for Vancouver’s Dale MacKay. After months of fierce competition on the inaugural season of Top Chef Canada, the 30-year-old chef took home the title of Top Chef on the July 4 season finale. 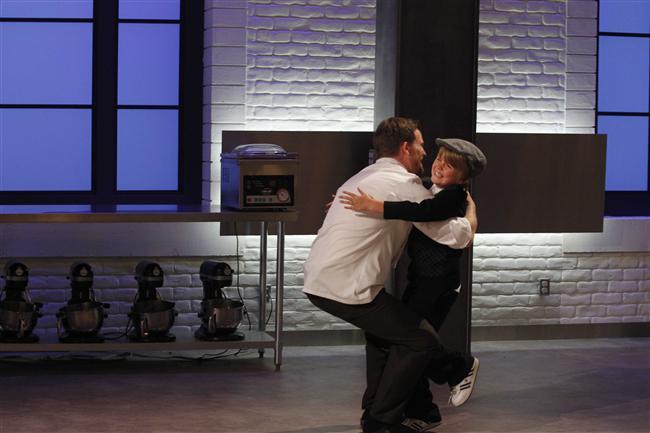 It’s been a good week for Vancouver’s Dale MacKay. After battling it out for weeks on the inaugural season of Top Chef Canada, the 30-year-old chef took home the title of Top Chef on the July 4 season finale. The victory comes with a grand prize of $100,000 and a GE Monogram kitchen worth $30,000.

Fresh off his win, MacKay paused to share his thoughts on the show, what it feels like to be called a TV villain, and what he plans to do with that $100,000.

Q: How did you feel when you won?

A: It was a massive sense of relief. It was just like ‘thank god I won’ because you know, you put yourself on the line going on the show. I really wanted to prove it to myself and to the country and to my son that it was going to happen. It was awesome and then when I turned around and my son was there that was even better.

Q: What dish are you most proud of?

A: The soufflé during restaurant wars. They are really temperamental and not something you’d ever really attempt to do [in that situation]. I wanted to take a risk and put myself out among the other contestants by showing that I wasn’t scared. I won restaurant wars with a soufflé (see Dale’s souffle recipe here).

Q: What’s it like to hear criticism from the judges?

A: I don’t mind constructive criticism but at the same time nobody likes to hear it. If anything it just motivates me. It p—-s me off and makes me want to get cooking again.

It may not have looked like it on TV, but I can always admit when I’m wrong… There were definitely a few times that I disagreed and I got pretty fired up but you kind of sign up for that. A lot of people are asking me what I think about being portrayed as competitive or a “villain” [on the show].

Q: People are calling you a villain?

A: That’s what somebody said. They said ‘You were portrayed as the villain’ and I said, ‘that’s weird, the villain won this time!’

Q: You took some heat from the judges for being too precious in your cooking. What do you think about that?

A: I think I’ll be precious if I want to be precious. It’s my choice and just because I’m precious doesn’t mean [the food] doesn’t taste fantastic. I would rather be precious and create beautiful food then be sloppy and rustic.

Q: Do you agree with the label ‘precious’?

A: No. I think it’s just an easy way to criticize me for making something look beautiful.

Q: You worked for Gordon Ramsay for six years. What kind of teacher was he?

A: He’s constantly attacking you all the time and it’s always valid. That’s the thing about Gordon: he shows by example. I mean the guy sees everything. That’s where I get my diligence, I think, because he just drilled it into me.

A: I just opened my own restaurant [Ensemble] two months ago in downtown Vancouver and it’s going really well.  I have quite a few other ideas and concepts that I want to put forward and I’m hopefully putting some of those in the works soon.

Q: What’s one thing you want to do?

A: Watching the show and seeing myself labeled as a ‘fine dining guy’ I want to try something extremely casual but that’s still going to be really refined… I want to show everyone that I can do casual better than anyone else too.

A: I got presented with a very large cheque yesterday…

Q: You mean a novelty cheque?

Yes, and I was pretty stoked about that. I was really hoping that was going to happen. I have a normal-size cheque in a safe at the hotel and I will be cashing it because it’s pretty much gone.

Q: To the new restaurant?

A: That and I’m going to take a big trip with son to Europe. The GE Kitchen… I haven’t decided exactly what I’m going to do with that.