Who needs a fancy wedding when a couple of big macs will do? Several McDonald's locations in Hong Kong are banking on the fact that brides will be happy with a cake made out of individual apple pies on the big day. 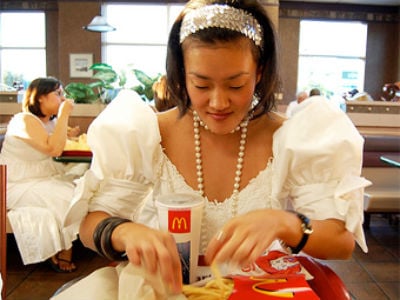 Who needs a fancy wedding when a couple of Big Macs will do? Several McDonald’s locations in Hong Kong are banking on the fact that brides will be happy with a cake made out of individual apple pies on the big day, because starting in January, the fast food joints will offer on-site wedding ceremonies. The offer actually comes in response to a rash of requests from couples eager to be wed by Ronald McDonald. Not a fan of their apple pie? Not to worry – a burger cake is also available.

Believe it or not, a recent Neilsen survey found that the average teenager sends 3,339 texts a month – more than 100 per day. Combine those busy fingers with the hormone frenzy that engulfs the teenage years, and things are bound to get a little PG-13. Now, a new smartphone app from Apple aims to keep kids from engaging in the very modern and very dirty practice of “sexting.” The app apparently recognizes naughty words and either replaces the word, deletes the word, or deletes the whole sentence, leaving kids cursing the very technology with which they are so enamoured.

Harvard’s MBA graduate Elizabeth Scharpf has been awarded the $100,000 Curry Stone Design Prize, and wait until you hear what she’s invented: banana sanitary pads! Scharpf was inspired to create the pad – made from the trunks of banana trees – while working in Mozambique. A local entreprenuer informed her that 20 percent of her workforce was missing work during their periods because they couldn’t afford sanitary protection. The pad will cost 65 percent less than those produced by Proctor and Gamble and 35 percent less than generic brands.

Global warming baffles Americans, according to a new survey just released by Yale University researchers. While 63 percent of the U.S. population believes that global warming is happening, only 57 percent know what the greenhouse effect is, and only 45 percent are aware of carbon dioxide’s role in trapping the earth’s heat. Close to half of Americans believe the space program contributes to the issue. If you think you might be in need of a global warming primer, as many who took the survey admitted they believe they are, click here.