You may have already heard from scores of angry bloggers about the article Marie Claire recently ran on its website, questioning whether “fatties” should “get a room.” 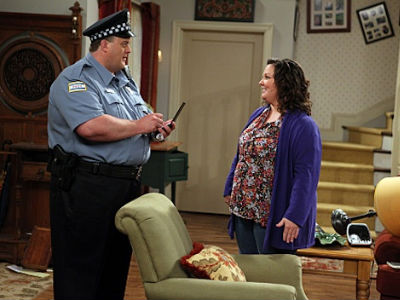 You may have already heard from scores of angry bloggers about the article Marie Claire recently ran on its website, questioning whether “fatties” should “get a room.” In the piece, columnist Maura Kelly ponders whether the two overweight lead actors in the show Mike & Molly should be allowed to kiss on television. Kelly has a lot of ridiculously offensive things to say, but this little gem ranks near the top: “I think I’d be grossed out if I had to watch two characters with rolls and rolls of fat kissing each other … because I’d be grossed out if I had to watch them doing anything…” Needless to say, thousands of happy, chubby women, and probably some skinny ones too, wrote in to complain about the piece. Kelly has apologized, claiming her insensitivity stems from a personal struggle with anorexia. Marie Claire‘s editor-in-chief, though, has decided to stand by the controversial article, and told the media that Kelly was “excited and moved by [the public’s] responses.”

The real-life hero depicted in the film Hotel Rwanda is implicated in a terror case in his home country. Paul Rusesabagina will reportedly be summoned by Rwanda’s prosecutor general to respond to investigations that indicate he was involved in the terrorism activities for which opposition leader Victoire Ingabire is currently in custody. Rusesabagina was the subject of the 2004 Oscar-nominated film Hotel Rwanda, which chronicled how as a hotel manager, Rusesbagina saved more than 1,200 people from Rwanda’s 1994 genocide.
The duck death toll at the Fort McMurray tailing ponds continues to rise, as Syncrude announced yesterday a total 350 birds have now died and Suncor reporting 40 more. The migrating birds landed on oilsands giant Syncrude’s tailing ponds on Monday night. The ponds – a mixture of chemicals and hydrocarbons used to separate bitumen from sand – are toxic to fowl, and birds that land in the ponds must be euthanized. Sound cannons and radar are used to keep birds away, but experts speculate freezing rain forced the birds to land in the sludge-filled ponds.
A new study has found that smoking heavily in middle age more than doubles the risk of developing Alzheimer’s disease or dementia later in life. Up to now, the link between smoking and Alzheimer’s has ill-defined, as smokers generally succumb to other health problems before reaching the age when Alzheimer’s and dementia typically manifest themselves. This large and lengthy study, which examined data collected in California from more than 21,123 people, found that those who smoke two packs a day have 2.14 times the risk of developing dementia and 2.57 times the risk of developing Alzheimer’s. Researchers say its definitive proof that smoking does major damage to your brain as well as your heart and lungs.
A man who spent 26 years in a B.C. prison has been acquitted of all 10 of the sex related charges that put him behind bars. Ivor Henry was found guilty of three counts of rape and seven counts of sexual assault in 1983, but always maintained his innocence, despite decades of incarceration. The B.C. Court of Appeal yesterday overturned those charges due to several irregularities in the prosecution, the most glaring that a DNA test would have quickly eliminated Henry as a suspect. Henry says he is not angry and that his belief in god and honesty got him through his time in jail.
FILED UNDER: alzheimer's chatelaine-daily, flannery-dean marie claire smoking