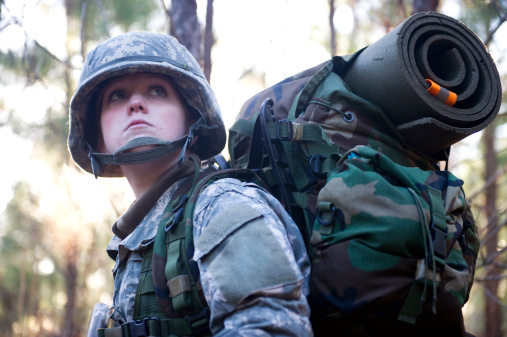 Canadian Armed Forces promises its female recruits equal opportunity for service, adventure and fulfillment. On its website, CAF touts the benefits of free education, exciting careers, sustaining friendships, personal challenge and a family-friendly lifestyle. In promotional videos, women in uniform talk of an environment steeped in integrity and honour and speak with relief at not being judged on their external appearance, but rather on their talent and courage.

No doubt that’s true, at least some of the time, for the 10,000 women in the CAF. But the other side to life for women in the military is hostility, sexism and abuse at the hands of their comrades and commanders. Last week, violence-prevention educator Julie Lalonde went public with her experience of being heckled and harassed last fall by students at the Royal Military College in Kingston, Ont., the elite leadership training academy. She was asked to teach a workshop on consent and sexual assault and was met with catcalls and threats. Since coming forward, Lalonde has faced further attacks, including from someone who suggested she kill herself.

That incident follows a report released last month written by Marie Deschamps, a former Supreme Court judge. She spoke to 700 CAF members who confirmed the existence of a “sexualized culture” of degrading jokes, unwelcome touching and rape. (A 2014 story in Maclean’s estimated that every day five people within the Canadian military community experience sexual assault; the victims are mainly women, but men also report unwanted touching and other forms of sexualized abuse.)

“At the most serious extreme,” Deschamps wrote, “these reports of sexual violence highlighted the use of sex to enforce power relationships and to punish and ostracize a member of a unit.” Even more troubling was the observation that victims rarely complain or seek justice because they are afraid of being ignored or punished for being weak or disloyal.

There’s a tendency in these sorts of cases to suggest that these are isolated actions of a minority, the crimes of a few bad individuals. It’s reassuring to believe this, especially about the military, a body that all of us fund, imbue with credibility and authority and ask to represent and defend our interests. Because of the sacrifices we ask military personnel to make, we hesitate to criticize or we soften it with an almost automatic, “but I support the troops,” so we don’t sound unpatriotic.

As Deschamps’ report and Lalonde’s experience make clear, the real crisis here is not the individuals who abuse or harass. It’s the values and power structure of the military itself. According to Deschamps, the senior command is “responsible for imposing a culture where no one speaks up and which functions to deter victims from reporting sexual misconduct.”

That culture of machismo, of rigid hierarchy, and of obedience is the historical foundation of the military. These factors are also the hallmarks of an environment where sexual bullying can flourish, and where people at the lowest ranks are never empowered to challenge their superiors.

Those superiors have made all the right noises, but have done little to dismantle this culture. General Tom Lawson, the Chief of the Defence Staff, has said, “exemplary conduct is part of the Canadian Armed Forces members’ obligation to serve. We cannot accept anything less, and I will not accept anything less.” However, two weeks before Deschamps’ report was released, Lawson issued orders to ignore her key recommendations, including the most significant one: the creation of an independent body to handle complaints of abuse.

At the Royal Military College, Lalonde says that she was set up to fail. Her workshop was scheduled on a Saturday, meaning cadets had to give up free time to attend, creating resentment from the outset. After she was harassed and felt so unsafe she asked for an escort to her car, it took five months for the school’s commandant, Brig.-Gen. Al Meinzinger, to apologize.

It’s a monumental task to undo centuries of military tradition and lore and to reshape the CAF with modern, inclusive values. But senior command will never begin to correct this by closing ranks and resisting outside scrutiny. As for the rest of us, supporting our troops doesn’t preclude holding them to account.