Samantha Bee has a confession: She just loves presents

The gift may be in the giving for some, but Sam Bee admits her favourite part is the receiving! 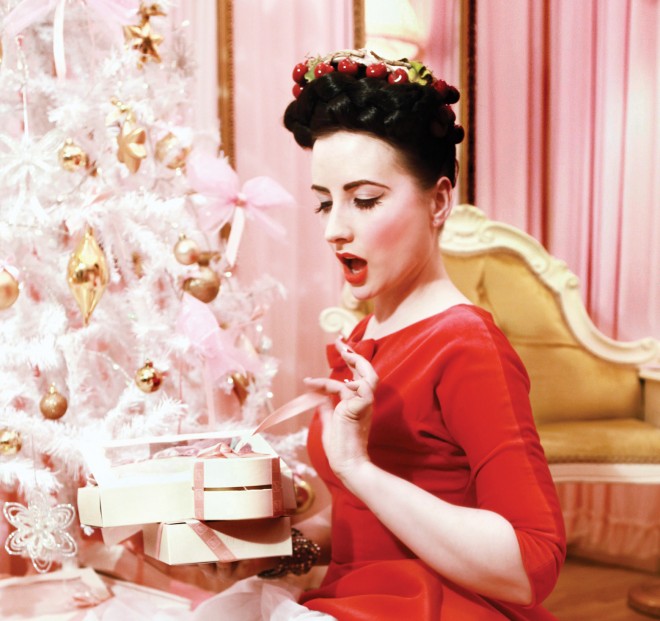 The gift may be in the giving for some, but Sam Bee admits her favourite part is the receiving!

I have a confession: I just love presents. And more specifically, presents from my husband. I know, I know, I’m not supposed to say that. I’m supposed to say “We’re not doing too much this year” or “We’re trying to focus on the kids” and that’s sort of true, but not entirely true. I love presents, and I’m forcing my husband to buy me some, the same way I do every year. Whee!

Let me say up front that I’m not talking about over-the-top luxury-grade delicacies here—it’s not all about extravagance; what I’m asking for is a small selection of heartfelt, well-sourced items that require a) extensive knowledge of my hobbies, habits and tastes, and b) going to some kind of trouble to acquire these things. And if I’m being honest, the more trouble the better. A hand-stirred artisanal jam goes a long way for me if I know the cloudberries were grown organically in the fragile soils of Cape Breton and that my husband had to drive hundreds of kilometres to grab the Last Remaining Jar on Earth. Thank you. It tastes delicious on the stone-milled-corn cracker that you had to drive hundreds of kilometres in the opposite direction to obtain. I love you.

What happened to me? When did I become such a present-loving fiend? A fiend who, beyond all logic, has rejected her husband’s idea that “this year we should maybe not do presents, but go on a trip somewhere instead.” To which I believe I replied/sputtered—and forgive me if I’m paraphrasing here—”But… but… but… presents!”

Let me tell you a little story that may provide insight. Once, in first grade, I grew a single peanut. I grew that peanut from a humble seed into the handsome, magnificent, multi-chambered peanut pod that I planned to take to my class for show and tell, to be followed by some kind of ceremonious ingestion, I suppose. I don’t know how long it took me to grow that thing (months!), but I do know that in typical six-year-old fashion, I left it on my desk, and over the weekend someone came into our classroom and ate my precious peanut, leaving behind only a sad, dried-out shell, callously discarded in my cubby. I never got to give my class their peanut. It’s fine. I’m fine. Yes, it’s been over 37 years since that transpired, and I’m still talking about it, but I’m sure that’s normal.

The point is, when I give gifts, I give gifts. I am into giving gifts, by which I mean I think a lot about them; I write notes about people throughout the year; and I’m very organized about it—it means a lot to me to give the right kind of gift to the right person. If I love you enough, I may even grow you a peanut of your own one day.

And, oh, Lord, I realize that my husband is tired. Just look at him over there, trying to be secretive about Google-mapping directions to that place that sells those funky hand-dipped beeswax pillar candles that smell so good. He’s exhausted. The only thing that makes this okay is that I just got him five things he didn’t even know he wanted but will want when he sees them, because I know him really well, and he deserves the fun of opening a fun surprising present. Right? Fun! He never gets to do stuff like that.

And even though we love each other fully and completely, and express this regularly, I promise to repay his generosity of spirit by having a full weep as I open every single gift he buys me. Because, thankfully, I’m blessed with an uncanny ability to forget that I was the one forcing him to buy me said presents in the first place. I believe the term for this is cognitive dissonance.

So maybe I am a Christmas Control Freak. After all, I did create a Mommy Book for my husband to give me annually, in which the children are meant to draw a picture, or say whatever to me, with no restrictions, so that one day I can sob all over that, too. (In fact, feel free to imagine my tears soaking whatever it was that my children have made for me, followed by me hugging them until the beg me to let them go. Literally, tears of joy running down the item in rivulets. It’s like a medical miracle.)

It’s no homegrown peanut, I know, but it will have to do.