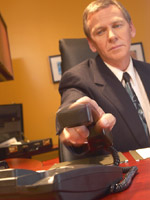 Starving student Gwyneth Peters* needed to save up some money before the school year started, and waitressing for the summer at the local tourist-trap restaurant was her only hope. But, boy, would it be a grim task. Friends who had already done time in this joint told Peters about the restaurant’s less-than-kind manager: Simon Cowell had nothing on this ogre.

On one of her first shifts that summer, Peters lowered the awning over the outdoor patio so diners wouldn’t get heatstroke while pigging out on overpriced pub grub. Her boss promptly went ballistic in full view of the customers: the awning made the patio too shady. The next day was another scorcher, but diners be damned, Peters left the awning rolled up. A few minutes into her shift, the boss came bounding over and said she must be pretty stupid to keep the shade up on such a sunny day.

But generous tips made up for her boss’s irrational behaviour. After three and a half years of servitude, Peters walked away with no university debt, tougher skin and an MBA in How Not to Treat Your Employees – experience she now puts to work in her own management career. Like Peters, chances are you’ve also toiled for a boss from hell – or one you wish would go there – and are better for it. Read on for the best lessons five other women learned from their worst bosses.

Some days, Christine Kelly* recalls, her boss loved her work – he once even rewarded her with a sweater in front of fellow staff members for a job well done. But on others, she could do nothing right. “He made me feel good one day, and then demeaned and berated me the next,” says the small-company manager in St. John’s, Nfld. “But I kept telling myself I was learning a lot and that it wasn’t that bad.”

Hard-won wisdom A manager’s honest words and cool demeanour will always trump a second-rate acrylic pullover. “Today I know what people need to hear, and see, to feel good about their work,” says Kelly, who now oversees six employees. “And as a manager, I try to maintain an even temper and keep my emotions under wraps – even when they’re bubbling beneath the surface.”

Survival strategy Look for patterns on what sets the mood swinger off – such as an angry phone call from the big boss – and when you see early warning signs, divert her wrath as best you can. “The number one rule in working with others and avoiding conflict is to focus on the problem and not the person,” says Jim Clemmer, a leadership consultant in Kitchener, Ont., who holds workshops on boss-employee relationships. Refrain from using sentences starting with “You always….” Instead, try something like, “When you insert degrading action here, I feel sad/hurt/that I might kick you.” (Avoid the latter when possible.) Can’t figure out what triggers Ms. Mood Swing? Stand your ground and tell her when her behaviour isn’t acceptable – this should buy you some respect.

Lindsay Sukornyk of Toronto once had a boss who’d say nothing all day and then disappear into a three-hour meeting at 4 p.m. “We’d wait for him to come out, and then he’d hand us work with no context to it and tell us to have it done for the next day,” she says. After Sukornyk logged late hours on a pointless task, her boss would rip it apart.

Hard-won wisdom Encouraging your employees to work round-the-clock isn’t a good management skill. Sukornyk finally said ta-ta to the slave-driver and eventually started her own leadership-coaching company. Her team does put in a lot of hours when needed, but “our work is dependent on being creative, and it’s counterproductive to put in so many hours that everyone burns out,” she says.

Survival strategy Talk to your boss about how often you may have to work overtime, says Gini Graham Scott, the California-based author of A Survival Guide for Working With Bad Bosses (Amacom). If she expects you to put in the occasional late night, it shouldn’t be a shocker.

The Knows Nothing Know-It-All

As though he had taken a management course from The Simpsons’ Mr. Burns, Stephanie West’s* boss ruled by fear. West, a TV producer in Toronto, began to suspect his lack of experience was behind the scaremongering. “He pretended to know everything and wouldn’t listen to the specialists he was working with,” she says. “He would never admit he didn’t know what he was talking about.” He also constantly criticized crew members behind their backs, so that everyone felt like a target.

Hard-won wisdom “I never pretend to know something when I don’t, and I listen to the people I hire,” says West, who recently found herself unable to figure out which camera to use for a documentary she is producing. “I was tempted to fake it but instead I asked one of my crew members to tell me which one would work best,” she says.

Survival strategy Avoid public confrontation – no matter how tempting – when it comes to a know-it-all. “Instead, approach her privately with suggestions on doing things differently – not better, but differently,” says Graham Scott. Does your boss routinely fume because no one follows her 101 asinine steps for writing a sales memo? Talk to her privately about ways to streamline the process – if she buys it, she’ll save face and you’ll gain brownie points.

When she was a magazine editor in between jobs, Renee Wilson of Whitchurch-Stouffville, Ont., accepted an offer from an art agent who needed an assistant who was organized and good with words. But by the end of her first week there, Wilson discovered that she had actually been hired as a glorified gofer, number cruncher and debt collector. “I did what she asked, but reminded her often that I was not an accountant,” Wilson says. Then the agent began openly mocking her by laughing out loud and huffing sarcastically while Wilson was on the horn with the company’s debtors. “The final straw was when she asked me to buy her tampons and codeine,” Wilson says. “The only thing I said before I went to the store was ‘paper or plastic?'”

Hard-won wisdom Don’t sacrifice your dignity. After quitting, Wilson went into her next job armed with a take-it-or-leave-it attitude. She immediately set clear boundaries with her new boss, who then knew Wilson wouldn’t bend on certain issues.

Survival strategy Ask your potential employer to outline your duties before you accept the job. That way, you’re both clear on what is – and isn’t – expected of you. If you’re already at the mercy of your own Devil Who Wears Prada, let her know how her harsh words upset you. Then ask her what she does like about your work – you’ve got to be doing something right or she would have drummed you out long ago.

“My former boss was very much a hands-off manager,” says Sarah Fogels* of Barrie, Ont. “He’d give instructions for a project such as, ‘Finish this. I don’t care how you do it, just get it done.'” But his incompetence truly shone during a performance review. “He started by saying, ‘I don’t really know what you do, but here’s what we’re going to say.'” Then, as the so-called evaluation went on, he put his feet up on his desk, reclined his chair and scratched his crotch.

Hard-won wisdom How you behave says more about your management style than anything else. “It’s not only your words that show disrespect,” says Fogels, now a manager herself. She works hard to demonstrate her respect for her employees – through both words and actions – and gets the boomerang effect of good work from them in return.

Survival strategy Think twice about getting human resources involved – there’s no guarantee they won’t tell your boss, so the first question you should ask is whether they’re willing to keep your conversation confidential. If not, Graham Scott suggests creating your own plan of attack if your manager is reluctant to specify a project’s direction. “Write it down and then get your boss’s approval,” she says. “Sometimes a person is promoted for reasons other than being a good manager, so you may not get appropriate input because she just doesn’t have the skills.”

Want to find the perfect job for you? Search a database of job postings, and find career advice here.