Last week of goodbyes before I move to Vancouver

During my house hunting trip last week, I finally found the apartment that I'm about to call home. And then last night, I realized I only have one more week at home with my family and the people I love. 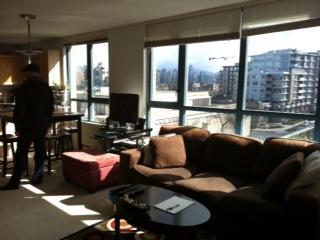 I know that people do this all the time. I spoke with a lovely man named Chris on one of my recent flights and I was so impressed that when he was only nineteen, he left his home of India to move to Canada where he didn’t know anyone. So why does my own move feel so very hard?

That being said, I enjoyed my week out west. I found a lovely place to live (that you can see in this photo!), spent some time with friends, and enjoyed exploring the city of Vancouver. Then I came home and I booked the movers for next Tuesday and plotted out my route. But when I finished doing all that, I thought, ‘How will I leave everyone behind?’

I keep thinking of Friday, which is my Depart With Dignity (DWD) event. The DWD was designed so that every soldier left the military on a good note, with a nice luncheon and surrounded by the people who have helped them in their career. Recently, while attending someone else’s DWD (for a person I hardly knew), I felt tears springing to my eyes when I realized that my own DWD event will be one of the most emotional things I will face in my life. It is the end of a chapter of my life I have come to be proud of and one I don’t know how to say goodbye to. I’ll also be saying goodbye to people who haven’t only been friends, but rather, they’ve become my military family — one that I cherish as much as my biological one.

Tonight, I’ll fight through some stinging tears and try to write the speech that feels impossibly difficult. All I can do is take it one day at a time and embrace my new life, my new job, and the possibility of new friends that will be made somewhere across this amazing country.