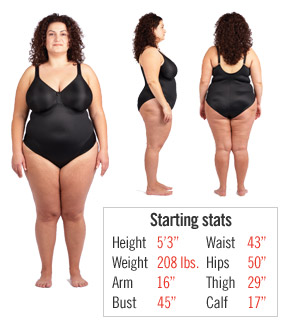 WHY I’M DOING THIS At age 44, my mother died of breast cancer. For the past seven years, I’ve been walking the CIBC Run for the Cure. Every year I say I’ll get back in shape to run it. I want 2008 to be the year I run in her honour.

BODY HISTORY My weight has yo-yoed since age 25, when I lost my mother. I started at 145 pounds and over four years I reached 210. I don’t want to go on another yo-yo diet.

EXERCISE ROUTINE I was taking a dance class with a friend, but we didn’t go back after last summer.

WHAT I EAT Four out of five times a week, I eat dinner at my sister’s house or at a restaurant. My sister cooks Greek food like there’s no tomorrow. I’ll eat anything she makes, but the best is her cheese pie, tiropita. She makes the phyllo from scratch. Giving it up is going to be hard, but my family and friends are supporting me.

STUMBLING BLOCK Yes, I’m an emotional eater! When I’m frustrated or angry or sad, the bag of chips comes out.

TIME CRUNCH Following a schedule is tough for me. I’m very much a what-am-I-doing-tonight person.

ULTIMATE GOAL In 2010, I want to walk the Weekend to End Breast Cancer, which is a 60K marathon. It will be the 15th anniversary of my mother’s death and my 40th birthday.