Keeping up with Jones 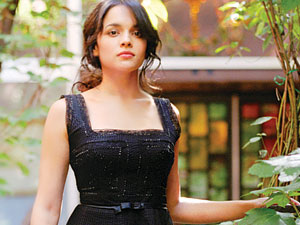 “I came to New York [from Texas] to play jazz, not to get into the songwriting scene,” Norah Jones says matter-of-factly. You’d never guess it. With eight Grammy awards under her belt, the 27-year-old songstress has already carved herself out as one of the world’s most well-known singer-songwriters. (Her 2002 debut, Come Away With Me, sold 20 million copies worldwide.)

Jones’s new record, Not Too Late, showcases the artist’s signature country-and jazz-inflected style, but it’s also a testament to the maturation of her voice and her songwriting. “I feel like I’ve gotten over a hump creatively,” she says. And it shows. The album includes, for the first time, all original songs, many co-written with Jones’s bassist and longtime partner, Lee Alexander. Her range is expansive, from bittersweet love songs to political commentary to a two-step with indie crooner M. Ward.

It’s being released just as Jones makes her screen debut, starring opposite Jude Law in the forthcoming romantic comedy My Blueberry Nights. Jones plays a young woman who embarks on a soul-searching journey across America to resolve her questions about love, encountering a series of unusual characters along the way. (Director Wong Kar-Wai reportedly wrote the character with Jones in mind.)

“I don’t know what happened, but somehow I’m starring in this Wong Kar-Wai film alongside Natalie Portman and Rachel Weisz,” she says, still amazed by the absurdity of it all. “I can’t imagine that he saw me in a music video and thought, ‘Whoa, I want her in my next film.’ “

Despite her record-breaking sales, Jones is determined to “live like a normal person.” In her spare time, she plays guitar – under the radar – with a raucous all-girl band that she avoids naming. She also gushes about meeting one of her idols, Leonard Cohen, at a recent Joni Mitchell art show in L.A. (“He’s so tiny. He’s just the sweetest man.”) And she’s equally as enthused by her latest purchase – a CD from the harp-wielding singer Joanna Newsom: “Her writing is out of this world,” Jones raves, “and her harp playing is just so sick. I’m very inspired by her.”

When it comes to discussing her own talents, Jones is low-key. She considers her much-lauded debut to have been “a bit haphazard,” and says she was still trying to figure out what kind of music she wanted to make at the time.

“I never really wanted that kind of success,” she admits. “If you had asked me if I wanted it, I probably would have said no because it puts a lot of pressure on me. Once something becomes popular, people start to tear it down,” she adds. “And the cool people don’t like it any more.”