Charles Pachter is a painter, designer, sculptor and historian, whose work has been shown in the AGO and McMichael gallery, among others. His iconic image of the Queen riding the moose earned him the status of Canada's Andy Warhol — a pop artist for the North 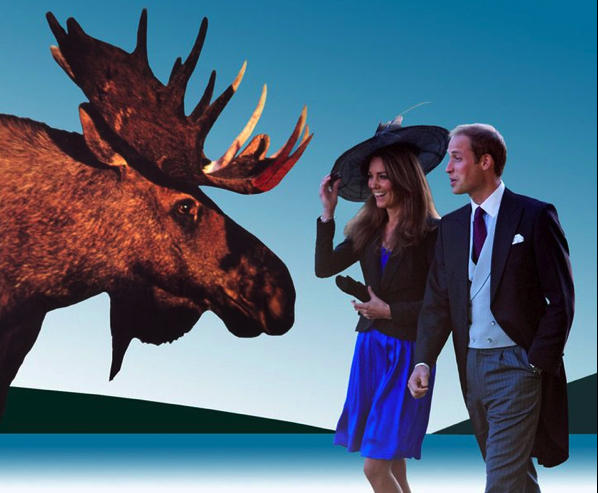 Charles Pachter is a painter, designer, sculptor and historian, whose work has been shown in the AGO and McMichael gallery, among others. His iconic image of the Queen riding the moose earned him the status of Canada’s Andy Warhol—a pop artist for the North. His most recent take on the royal wedding depicts William and Kate greeting the moose for the first time, something they will do on their first official tour in June. I chatted with Charlie over email.

Q: You’ve painted many members of the royal family over the years – your image of the Queen on the moose is one of the most iconic Canadian artworks ever. Does this mean you’re a monarchist or a republican at heart?

A: Not sure if I’m one or the other. The British monarchy seems to have become an anachronism, albeit a fascinating one. A dysfunctional family with a steadfast and dutiful granny at the helm. But the concept of appointing a cool Canadian head of state in these times seems to be more and more appealing.

Q: How excited are you about the royal wedding, with one being “not at all” and 10 being “so excited the Arab awakening pales in comparison” – and why?

A: It’s Britain’s vesigial post-colonial pop art ritual, their version of Hollywood—pomp and circumstance—remember Grace Kelly and Prince Rainier, Diana and Charles? Kate and Will are right up there with Justin Bieber and Lady Gaga. I’d give it a seven, just out of curiosity.

Q: What do you think Princess Diana would have made of her son’s choice of bride?

A: She’d probably have approved. Another people’s princess.

Q: Why do you think Kate and Wills chose Canada for their first official tour as a married couple?

Q: How do you feel (and I mean really feel) about Kate Middleton’s hair?

Q: Have you ever met a member of the royal family and if so, what was he/she like?

A: I met Princess Margaret in 1981 (charming), the Queen Mother in 1989 (more charming), and Prince Charles in 1999 (alarming). Have never met Her Maj. I think she should knight me for making her so famous in Canada.

A: Neither! Maybe a tea cosy, or a toilet seat cover.

Q: Should Canada declare the royal wedding day a national holiday? Why or why not?

A: Of course not. We didn’t do it for Sir Elton John and his Canadian spouse, David Furnish—so why do it for Kate and Will?

Q: Do you think the royals are getting more or less interesting?

A: Plus ça change, plus ç’est la même chose…[The more things change, the more they stay the same]

Q: Your new work shows Kate and Wills meeting the moose. Will they get a chance to ride it?

A: They each get a solo turn – gotta be fair to the moose!