Kate Middleton is once again being applauded. This time it's not for what she's wearing, or saying, but by what she's not. 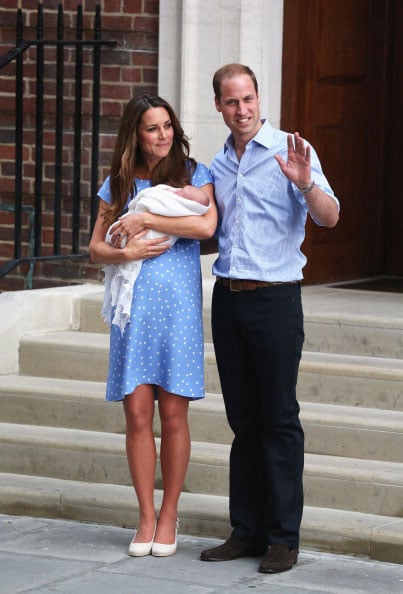 Three cheers for Kate Middleton. Not because she’s a Duchess and the mother of a future king, but because she’s bringing a little more to our cultural table than her elite social status. The modest brunette with a seemingly good head on her shoulders offers a welcome breath of fresh air in our increasingly stale celebrity culture, with its tacky reality stars, and its unwholesome obsession with the appearance, rather than the reality, of maternity and motherhood.

Kate Middleton’s appearance on the steps of St. Mary’s Hospital in London just hours after giving birth to her first child was notable for a few reasons. Not only does the 31-year-old deserve admiration for facing an enormous crowd of onlookers, the international press corps, and an international audience shortly after enduring an 11-hour labour — I can’t think of a prospect any more horrifying to a new mother than facing a camera post-partum — but her appearance was refreshingly normal.

Kate looked pretty, but naturally tired, after her ordeal. She didn’t try and conceal her fatigue with a face full of makeup or overstyled hair, but rather just did what most women would do under the circumstances: opt for a sleek blowout, a little blush and some mascara. Sure, Kate had a personal stylist to deal with her mane and her makeup, but she is a Duchess after all and she’s going to take advantage of the perks of the job.

More important, the new mother wasn’t Spanxed out or zipped up, but displayed the very natural soft belly that is a reality for every woman after giving birth.

The press and women’s organizations are lauding Kate for her natural appearance post-delivery. Some are calling her decision to embrace her ‘mummy tummy’ brave and bold and are applying any number of hyperbolic adjectives to her decision.

I don’t think brave and bold apply to the situation or to Kate. In fact, I’m leaning more toward natural, sensible and obvious as more accurate descriptors of her behaviour both before and after her pregnancy. These are characteristics well worth celebrating, however, and particularly so in an era in which so many women feel the pressure to conform to Photoshop’s standards of perfection rather than embrace who and what they are at any given moment of their lives.

So, three cheers for the refreshingly human Duchess, and here’s hoping ‘mummy tummy’ replaces the phrases ‘body after baby’ and ‘losing the baby weight’ once and for all.

Tell us in the comment section below: how did you feel about your body post-baby? Click here for more photos of the Royal baby.