A shot of the Liberal leader posing next to a bare-breasted woman has surfaced on Twitter. Bad political move? Probably. Good message for women? Definitely. 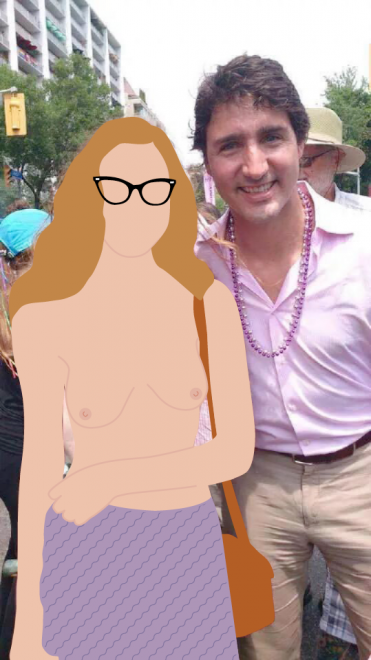 The photo appears to be from Toronto’s 2014 Pride festivities (we’ve illustrated the woman to maintain her privacy).

It’s been a big week for our federal leaders: On Sunday, the Prime Minister green-lit what will be the longest election campaign in Canadian history and, tonight, the four major party leaders will square off in their first televised debate. Perfect timing for a topless scandal!

Last night, right-wing commentator Ezra Levant posted a photo to Twitter that got a fair bit of traction before he deleted it: On the right, a smiling Justin Trudeau can be seen sporting a cheery pink shirt, with celebratory beads to match. To his left, a bespectacled young woman, also smiling, is wearing no shirt. Or bra. “What politician would pose for this picture?” Levant tweeted. “What strategist would advise it? What point does it prove?”

When asked to comment on the photo, which appears to have been snapped at Toronto’s 2014 Pride festivities, a spokesperson for the Liberal party said, “Mr. Trudeau consistently obliges thousands of Canadians who ask him for photos…. Unlike other parties, we do not screen people before they meet Mr. Trudeau.”

Sure, Levant’s pearl-clutching is a spectacular display of histrionics. But it’s also a bang-on example of how, even in a forward-thinking country like Canada, our regard for women’s bodies still skews toward the “Ew, boobs!” thinking of 11-year-old boys rather than the polite indifference of mature adults. Body politics aside, the photo op will undoubtedly feed into the image of Trudeau as a naive, pot-smoking greenhorn — one who has no place in the House of Commons.  In reality, the topless snap is exactly the kind of message Canadian women should receive.

The beaming blond is blithely sunning her breasts, and Trudeau’s reaction is entirely aligned with his broader pro-choice, pro-female mandate. He isn’t looking, he isn’t leering and, check closely, he doesn’t even appear to be breaking a sweat. He’s a politician out celebrating gay rights alongside a potential supporter. Say what you will about his economic vision or his foreign-policy commentary or, heck, his baby-balancing schtick, but Trudeau has established himself as the rare politician who doesn’t avoid the subject of women’s bodies like it’s radioactive.

Whether his opponents will choose to leverage the photo remains to be seen. Regardless, Trudeau’s message is clear: Tits out, tits in, doesn’t matter. It’s your body — he just wants your vote.

This piece has been updated with a comment from the Liberal party.

Related:
Is Justin Trudeau the candidate women have been waiting for?
Exclusive photos of the Trudeaus at home
Ruth Ellen Brosseau: from ‘Vegas Girl’ to NDP vice-chair