Justin Trudeau calls himself a feminist. Easy for him to say

Our prime minister fancies himself a feminist. Will that translate into real change for women? Just watch him.

What does being a proud feminist mean to me? Working hard to build equality of opportunity for men and women – @Chatelaine #ThisIs40ish

The 1,000 women surveyed for Chatelaine’s This Is 40(ish) offer plenty of funny, sobering and surprising insights about their lives. One result, however, stood out for me: 68 percent of respondents did not call themselves feminists. I suspect that most, if not all, of these women believe that a person shouldn’t be discriminated against because of their sex or gender. Their reluctance more likely indicates a misperception of what feminism encompasses. As my colleague Katie Underwood pointed out, the very stretchiness of its meaning is at once feminism’s greatest strength and its central tension. Everyone has their own definition or stereotype — from freedom fighter to man-hater — which has led many women to avoid the label altogether.

Someone who isn’t afraid of that label? Prime Minister Justin Trudeau. He’s dropped the F-bomb in numerous interviews and on social media, in English and in French (“Je suis féministe et j’en suis fier.”) And in response to Chatelaine’s survey, he tweeted, “What does being a proud feminist mean to me? Working hard to build equality of opportunity for men and women.” Trudeau’s feminism has become central to his brand, and that, along with his gender-parity cabinet and his pro-choice stance, has helped make him a global, progressive sensation. Vogue called him “flawless.” Cosmopolitan praised his commitment to women’s issues and Elle said he is “the real deal.” He even won over Ms., which admitted “We (Tentatively) Heart Canada’s Feminist Prime Minister.” 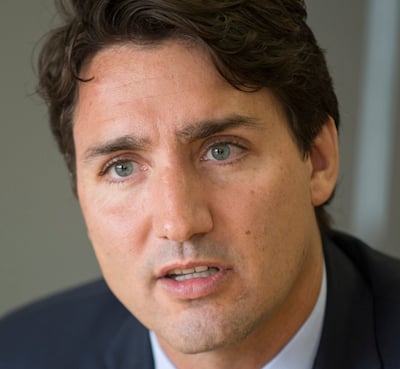 I believe men have a role to play in the fight for women and girls’ rights, and ultimately I’m happy when anyone pledges to the cause of social justice. But I confess there is little part of me that is reflexively skeptical about male feminists. Maybe I had too many exhausting encounters in university women’s studies classes with bell hooks–quoting guys in “Sisterhood is powerful” T-shirts seeking female attention and validation (what a friend called “the good guy cookie”). Or it could be that I’ve known high-profile men with feminist credentials who turned out to have been abusive and predatory in their private lives. Or possibly it’s that men calling themselves feminists can feel like a form of verbal manspreading, taking up too much space in the public conversation about women. (As The Onion put it: “Man Finally Put in Charge of Struggling Feminist Movement.”) It is, after all, a perfect illustration of male privilege that a powerful man like Trudeau is adored for being a feminist, while many women legitimately fear that they will be seen as strident, unpleasant or difficult if they dare call themselves one.

Writing about male feminists in The Cut last year, Kat Stoeffel made the crucial point that feminism “is a practice, not a status.” In other words, it’s not the label that counts, but the effort — the sustained, often frustrating, often unglamourous and unpraised work of changing policies and laws and attitudes. And it’s with respect to that work — that practice — where male feminists can fall short.

By calling himself a feminist, Trudeau has invited 18 million Canadian women and girls to hold him accountable to his practice, making sure that feminism is not just something he says, but something he does. The process has already begun: In light of the revelation that Trudeau pays his nannies out of his official household budget, the Globe and Mail’s Marsha Lederman called on him to provide better child care for all Canadian families. In response to the prime minister’s feminism tweet to Chatelaine, one woman shot back, “does this mean women will get paid dollar for dollar??? The glass ceiling was put there by men!!! #annoyed.” And while the government’s plans for a national inquiry into missing and murdered indigenous women has been largely commended, it was also met with caution. Manitoba elder Chickadee Richard told the CBC, “I’m hoping that the outcome [of the inquiry] will be greater than the announcement.”

It’s still early days for Trudeau: Things will get tough; the magazines will stop swooning. And he’s not going to please every woman with his ideas and actions. But to that, I’d tell the prime minister: Welcome to the feminist club. We all need to keep practicing.

FILED UNDER: feminism Justin Trudeau This is 40