Through a series of small changes, the lifestyle blogger and television personality halved the amount of trash she throws out. Here's how she did it. 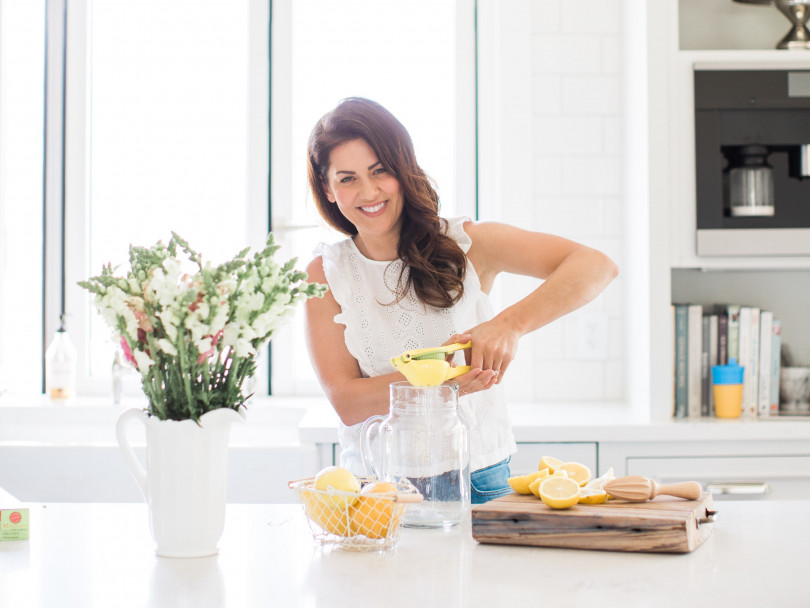 Fans love Jillian Harris for her super-cute style, woman-next-door approachability and unfailing honesty. She often starts sentences with, “I don’t know if I should say this but….” Spoiler: she always says it.

Such was the case at the recent Atelier Collective, a networking event in Toronto. Harris, a lifestyle blogger, television host and co-author of an upcoming cookbook, gave the keynote speech in which she talked about how her team vets brands to ensure they adhere to certain sustainability practises before partnering with them on promotional campaigns—mentioning one major retailer by name that she was initially reluctant to work with until she spoke to them in-depth about product materials and factory conditions.

Espousing conscious consumerism and working as an influencer don’t often go hand in hand; it is literally Harris’s job to consume—and promote the consumption of—various products. (And there is typically a lot of packaging involved.) But this year, through a series of small and ongoing changes, she has halved the amount of waste she produces at home in Kelowna, B.C.—alongside partner Justin and kids Annie and Leo—and in her work. (Her seven-person team also operates out of her house.)

Here’s how she did it—and you can too.

Figure out what overly packaged products you can live without

“Reducing the amount of plastic I use is my number-one goal, and recycling my second,” says Harris. Aside from the obvious—like taking reusable grocery and produce bags to the supermarket—she has changed her grocery shopping routine, hitting up the bulk food and zero waste stores first to buy as much as she can (including peanut butter) in reusable containers before heading to the supermarket.

There, she rejects products with unnecessary packaging, like plastic-wrapped English cucumbers and clamshell-clad cherry tomatoes and buys field cucumbers and tomatoes instead. (Shopping at your local farmer’s market, or growing your own vegetables, are other good options.)

“Can I live without cherry tomatoes?” she says. “Yes I can.”

You may have heard the dismal-but-true United Nations statistic than only nine percent of plastic ever produced has been recycled. This is due to many reasons, including the fact that China—which once processed a significant amount of the world’s recycled plastics—implemented a ban on most imported recyclables in 2018. Closer to home, many curbside recycling programs don’t accept common items like black plastic and Styrofoam, most of which ends up in landfill.

“I was feeling super overwhelmed about what couldn’t be recycled,” says Harris, “and then I visited our depot in Kelowna and had a come to Jesus moment.” Many depots accept items (including the aforementioned black plastic and Styrofoam, as well as plastic bags and batteries) that curbside programs do not; with a few minutes of internet research, you should be able to find one that’s near you and see what materials it accepts.

Set up a recycling station

Once Harris discovered all the additional items she could recycle at her local depot, she set up separate bins for soft plastics, crunchy plastics, Styrofoam and household batteries in her garage. That way, everything is sorted and ready to transport for her weekly depot run.

Speak up about what you don’t need

As part of her work, Harris is regularly sent products, unsolicited, in the hopes that she’ll mention them favourably to her one million-and-counting Instagram followers. In theory, it’s a dream job—except for the fact that these products are often items she won’t use, wrapped in extravagant and highly wasteful packaging.

“I’ve received beauty products packaged in a safe I had to break into,” she says. “We had so many packages delivered to us that I had to hire someone to dispose of the packaging.”

No more. Harris and her team now ask brands to reach out before shipping products to ensure they’ll actually use what’s sent. “I often ask for one hero product, and zero additional swag,” she says. “The product should really speak for itself.”

Obviously we’re all not sent complimentary  products on the daily, but consider what changes you can speak up about in your own home and office. Is there an opportunity to make family gift exchanges less wasteful? Do kids’ birthday parties need to involve gifts and loot bags? Similarly, at work: can you replace the office Secret Santa with a charitable donation—or an afternoon of volunteering? And in terms of reducing waste, consider buying a used set of plates and cutlery to use at monthly birthday celebrations in lieu of plastic. (That’s what one staffer did at Chatelaine HQ.)

She’s OK with that.

“I’m still a hypocrite in a lot of ways,” she says. “But I really like the saying, we don’t need one or two people recycling perfectly, we need millions of people doing it imperfectly.”