The Juno Award-winning singer-songwriter and Canada Sings! judge cherishes time spent at her home in rural Alberta where she loves to throw dinner parties for friends and family 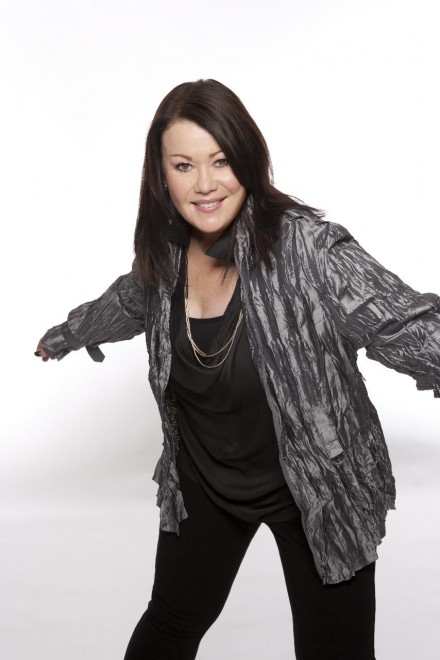 Eight-time Juno Award-winner Jann Arden is one of Canada’s most recognized singer-songwriters. She’s also one of the more beloved. That may have a lot to do with the fact that the Calgary native is both frank and funny.

Fans of the singer are about to see more of that winning personality in action as Arden takes on celebrity judging duty on the new reality singing competition, Canada Sings!, a Glee-inspired series that airs on Global.

Arden recently took the time to share her perfect Saturday with Chatelaine.com. Not surprisingly, the open and friendly singer cherishes time spent at her home in rural Alberta with friends, family and her pets.

My perfect Saturday starts by sleeping until around eight-thirty in the morning. I would probably lay there for a bit. I would grab my dog [a four-pound Maltese-Yorkshire terrier mix] off her little bed and bring her over on to my bed. We have a little morning routine—I’ll ask her, ‘Are you ready to get up? Is your stomach full of pee? If I push on there will your pee coming flying out?’

She’s all excited because she knows it’s time to get up and she has probably wanted to get up for the past hour-and-a-half.

Then I hop off the bed and put on my slippers: Uggs and I love them. I’ve put them in the washing machine a bunch of times so they’re really beat to hell. I’m a clean freak, so yes; I do wash my Uggs. You’re not supposed to, but I do.

I go over to the window and whip the curtains back—I have really thick, blackout curtains. Then I open my bedroom door and we walk into the living room and it’s the “slipper game” time. And I’m not kidding, this happens every day. My dog gets her foot between my slipper and my heel and she takes the slipper and runs for the deck door. I open the door and she takes my slipper outside. So now I have one slipper on.

I’ll go and have a yogurt shot in the kitchen, which I do every morning. I love my yogurt shot. Then I have an orange juice with half a cup of flax in it and I gag that down. It’s not a fun part of my morning.

I’ll put some music on or I’ll flip the TV on for some company. Usually I’ll look out the window and my mom or my dad is out in the yard filling bird feeders or pruning something, depending on what season it is. They live on my property about 50 feet from where I live. It’s fantastic. I love having them there. It’s like our little compound.

I usually talk to my mom in the morning. Then I’ll hang out for a bit. I’ll sit and do a few emails and make a few phone calls. Feed the dog, feed the cat. I’ll go down to the gym in my basement and either do the elliptical or the tread climber or go for a run. That takes me about an hour. I do that about 5 or 6 days a week.

If I don’t have to leave the house to get anything in town, I won’t. A lot of times, I’ll just have three or four friends over to my house for dinner and a movie. My parents might come too. They love coming over and watching movies. I always invite them to come over, and I’m telling you ten-and-a-half out of ten times they say ‘Okay!’

I cook a lot. My parents bought me this Ronco rotisserie for my birthday. It’s really hard to find, but it’s just the most amazing machine. So for dinner, I’ll stuff a nice 4-lb chicken full of lemon and onions and fresh herbs. We have a root cellar and a pretty big garden on our property so we have vegetables pretty much all year long. I’ll grab beets, carrots, turnips and red potatoes and just cut them up and roast them in the oven with herbs on and olive oil and sea salt.

Once the chicken’s done, I’ll tear it apart and serve it on top of the roasted vegetables with some crusty bread and some great wine and maybe an arugula salad with fresh ground pepper and pecans or something—just really earthy, simple food.

I’m not a huge dessert person, but my mom is, so she’ll bring dessert: a brownie or a square or cookies. I keep dark chocolate but I’m not dessert-y.

We’ll pull some movies out and have some wine. I’ve been into watching a lot of series’ lately. I love the BBC series Downton Abbey. A couple of weeks ago, some friends and I rented the AbFab series [Absolutely Fabulous]. We had a couple of bags of popcorn and raisinettes and we were just laughing our heads off. I’ve seen it about 50,000 times but when the girls go to the French chateau and they wind up staying in carpenters’ quarters—that always makes me laugh.

By the time the night winds down, around 10:30 or 11pm, I’ll want to read for a few hours. I like a lot of historical stuff. I really love Ken Follett. I just finished Fall of Giants. It’s 1,200 pages so it’s one of those thick things that you have to slog through. In between that, I just read a Marian Keyes book called The Brightest Star in the Sky, which is a really fun, quirky, Irish romance novel. I’m an avid reader.

That’s kind of my routine. And then it’s just like Groundhog Day: it all starts up again the next day!