The medical release process from the military is a long and bureaucratic one. It's in place for a reason, designed to protect our military members when they are suffering an injury or illness. 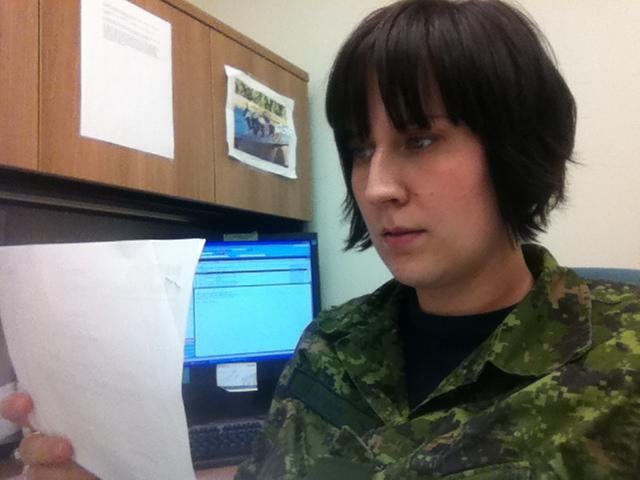 The medical release process from the military is a long and bureaucratic one. It’s in place for a reason, designed to protect our military members when they are suffering an injury or illness. The thing is, I’ve known for a while that my future in the military was rather bleak because my injury has prevented me from doing a lot of things physically. When you just want to hurry up and move on in whatever direction life will take you, the long and drawn out nature of the process can be frustrating.

But today, the official word came back saying that physically, I cannot perform my duties as a soldier and therefore, I can no longer remain in the military. In this photo, I had a friend document the moment I opened it. Reading the paperwork, I expected to be excited to start my new life. I can finally work in publishing! Deal with books for a living! Be a part of the creation of something! But I felt other things too. Scared. Nervous. Sad. Lost. It’s funny that after ten years in, the military has become an entrenched aspect of my being. It isn’t just what I do, it’s my identity. I don’t know how to give that up.

The thing is, it’s not a shocker that I will be medically released. I’ve written about it on this blog. Mark and I have been talking about selling our house until we can reunite in a few short years. I’ve been making purchases for my new job in Vancouver, working with Douglas & McIntyre publishing, a company I’ve admired and respected for years. I’ve been making plans and looking for apartments. But you know what? When it comes down to the actual moving and leaving the forces, a little voice inside me feels sad to see this part of my life end. It feels surreal.

I know that I would have been happy in the military, but I will also be happy outside of it. With civilian life comes a certain amount of freedom I haven’t experienced before. I will be able to choose where to live, how to cut my hair and when to see Mark. But I also lose many of my benefits, my steady pay cheque, my comradeship, and my uniform – all things that I’ve treasured.

Tonight, I will go home to Mark, take a glass of wine to the tub, and likely have a little cry about the news because it is both good and bad. It is real now, and it will happen in just a few short months. But once I’ve composed myself, and I know that I will, I will climb out of the tub, get into bed next to the man I love, and take comfort in the fact that for the first time, the decision to move to Vancouver hasn’t been made for me. Mark and I have made it together. We’ll both be happier in the end.

I know I will be okay. But without my uniform, I already feel a bit naked.