It's now time for a new puppy

Several months after losing my Bull Terrier, Duncan, to a massive seizure, I've decided it's time for a new puppy, especially with the upcoming transition in my life. 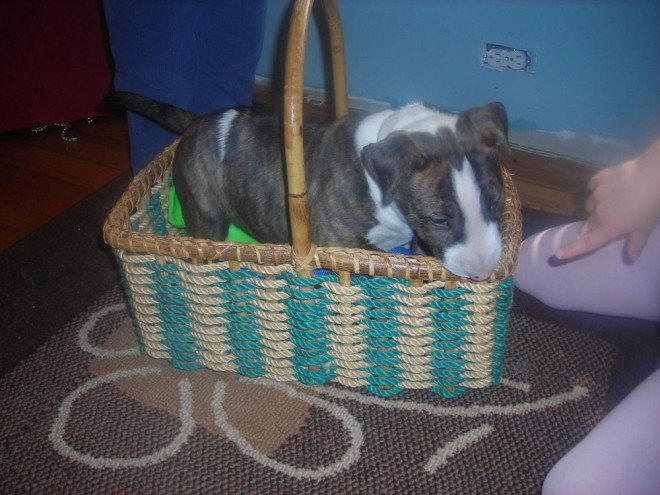 There nothing quite like a big, empty apartment to make you feel shockingly alone. And I’m no stranger to the proverbial apartment hunt. In just eight years, I lived in eight different places! But the last two moves were a little less scary because I had my beloved Duncan. A little ball of fur to make me laugh and distract me from all the things that were stressful in my life. And when the thought of Vancouver became a reality, I knew the trip would be easier with Duncan en route too. A little more logistically challenging, but less scary all the same because I wouldn’t be alone.

In case you happen to be a new reader, my dog Duncan, a hilarious ball of crazy in the form of an English Bull Terrier, died on Remembrance Day just a few months ago when he was only three years old. I still can’t think of that day without crying and the house still feels a little sad every time I open the front door. Duncan, buddy, I miss your happy tail that felt like a whip across my thigh and most of all, I miss your wet nose nudging my arm until it was comfortably on your velvety ear. In fact, I miss everything about you.

I’ve thought a lot about getting a new dog. Not just thought about it, but actively pursued it. Just days after Duncan died, I knew I needed another puppy in my life because my time with Duncan had just been far too short. Not only that, but I have too much love to give! And the motives are selfish too. Without Mark, I’ll be alone. Kelly plus puppy makes two.

My drive out to Vancouver in just a few short weeks, has already been planned down to the smallest detail (what can I say-it’s the logistics officer in me). The trip is conveniently going to travel through Calgary where I can visit a Bull Terrier breeder and meet the puppies so I can get one in the fall. A puppy that I’ve already named lovingly: He shall be called Pot Roast, a fitting name I think for a stocky muscled dog. Call me a crazy dog lady. I wear that label with pride.

So with this new chapter in my life, I know that initially, it will be scary. But I also know that I’ll be happy with my new job and even happier when Pot Roast snuggles into my arm and begs forgiveness for whatever new piece of furniture he ate that day. And with a little lick of my cheek, I know that all will be forgiven.

Hold on Pot Roast, wherever you are. I’m on my way.