Is the way to a man's heart actually through his stomach?

I shamefully admit that I do not like cooking, do not know how to cook, and have no interest in cooking. There are only four dishes I can make: omelets, grilled cheese, French toast and coffee (although coffee is pushing it as a "meal"). 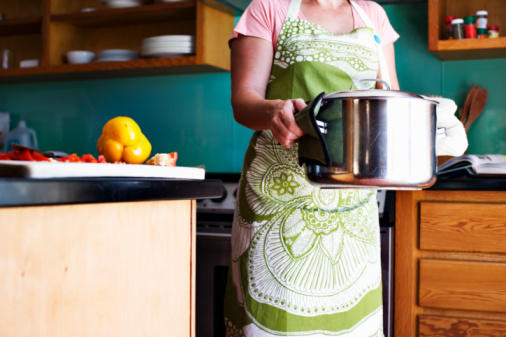 I shamefully admit that I do not like cooking, do not know how to cook, and have no interest in cooking. There are only four dishes I can make: omelets, grilled cheese, French toast and coffee (although coffee is pushing it as a “meal”). But I’m starting to feel guilty about that, because my boyfriend always cooks for me.

These days, men love to cook. My last boyfriend always cooked for me, and he didn’t seem to care that I couldn’t cook. Same goes with my new boyfriend, so who am I to stop him? That said, I do like this guy so much I actually find myself wanting to cook for him. (Dear God, who am I?)

I want to please him. And, as the saying goes, the way to a man’s heart is through his stomach.

I was more than interested to learn that chef Mary Jo Eustace, the host of the cooking series What’s For Dinner?, has a new cookbook out called Cooking For Your Cub. It’s a tongue-in-cheek cookbook for “cougars.” Now, my man is older than me, but as someone who has actually never once opened one, I figured a cookbook is a cookbook, and if Cooking For Your Cub is meant to teach younger men how to cook and introduce sophisticated flavors, then it could also teach me – a virgin cook.

The cookbook is meant to “seduce new lovers’ palates with sensual dishes.” It is also for “professional women who have the desire but not necessarily the time or skills to cook for their man!” That’s so me. I have absolutely no skills! I don’t even know where my oven mitts are!

I spoke to Mary Jo about the importance of cooking for men and her experiences.

1. She admits that most of her female friends don’t like to cook either, and that she knows way more men than women who like to cook. “I encourage it. I think it’s a nice role reversal.” That being said, Mary Jo was only 18 when she made her first dish for a boyfriend. It was a raspberry chicken dish with a wild berry risotto. “I slaved for days over it. It was very elegant.” So, apparently, I must prepare to slave over the stove and perhaps take the day (or week) off work.

2. The best reaction she ever received from a man she cooked for was after she made him a wild mushroom risotto with pancetta. “He had no idea I had a cooking show or was a cook. He never let me cook. Then I made him the meal and he said, ‘I should put a ring on your finger.’” (So, perhaps, if I make a meal I might get a proposal! No pressure, dear boyfriend, if you are reading this. This is Mary Jo’s story.)

3. I asked Mary Jo if a woman like me starts cooking, should I worry my boyfriend will then expect it all the time. “I’m teaching seminars on this, about the whole ordeal of buying ingredients and cooking together. It’s more about cooking together, which can make you feel really connected. So, yes, it will teach younger men basic skills, but it is also a fun and sexy thing to do together.” (So maybe I won’t have to do it all alone.)

4. I asked Mary Jo if I try one of her recipes, what will happen if it turns out tasting awful? “Then, Rebecca, it’s all your fault.” (Ouch!) “The recipes in this cookbooks are really easy and user friendly.” And, she adds, if my guy really likes me, he will be so enamored that I at least tried to make him dinner that he won’t care how it tastes. “If it does, just pretend it’s supposed to taste that way. When you’re cooking just pretend to try and look like you know what you’re doing,” she suggests.

5. I ask if take-out counts as cooking for a guy. “Whatever works for you,” she says. “You could do take out and put it into a pot so it looks like you cooked it.” I admit I have done this. “You go, girl,” she says. “Whatever it takes to make you look fantastic.” (Did I mention I really like Mary Jo?)

6. If the woman cooks, men should clean up. In fact, to her, watching a man clean up is like foreplay. “It’s hot when you sit back with a glass of wine and watch them clean up.”

7. She says that I only have to cook once a month and my guy can cook the other 29 days. When I mention that I think that the way to a man’s heart is more through sex than their stomach, she agrees. “The way to a man’s heart is always through their penis, let’s be honest. But food can be a very sensual part of a relationship, so if you can be on top of both, no pun intended, that’s ideal.”

8. Though she is dating an older man, if she were to cook for a younger man, it would be Mark Ruffalo.

Finally, she advises, if I put on high heels when cooking (and maybe a sexy apron) then I can’t possibly do wrong.

What about you? Do you like cooking for your guy? Does it turn him on? Or would you rather be cooked for?